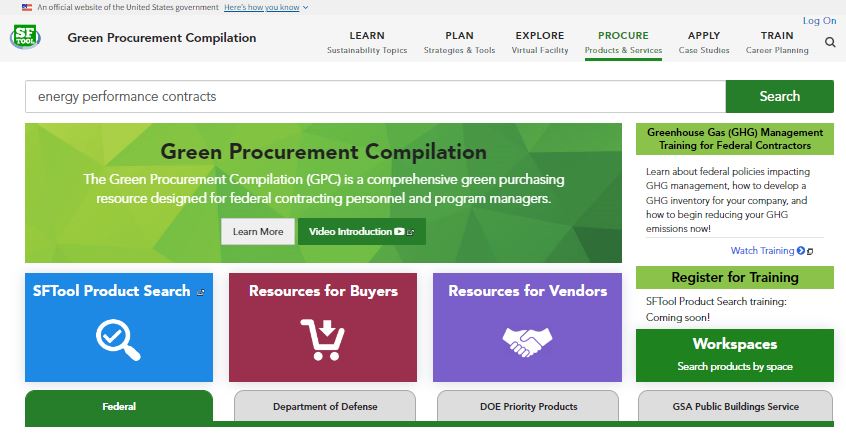 Procurement power is major pillar of the Biden administration’s Federal Sustainability Plan. As the country’s single biggest landlord and one of its largest energy consumers, the federal government’s purchasing power can either drive markets toward energy efficient innovation, or maintain the status quo.

Dorothy Robyn has worked at the two largest real property holders in federal government, as a former commissioner of the Public Buildings Service at the General Services Administration, and as a former deputy undersecretary for Installations and the Environment at the Defense Department. When making federal facilities more energy efficient, she said the experiences differed in that, GSA sees buildings as its mission while DoD does not.

“The mission of the Public Building Service, which I ran, is to efficiently operate federal buildings — that that is their mission. And they do it extremely well,” she said. This is in spite of the fact that GSA does not have full access to the rents they receive from agencies, as the money goes into the Federal Buildings Fund, which Congress can — and has — appropriate to non-GSA expenses.

GSA did receive $3.375 billion from the Inflation Reduction Act to invest in buildings with low-carbon materials and sustainable technologies and to leverage emerging clean technologies to achieve greater carbon reductions. Of those funds, $2.15 billion will go to low-embodied carbon materials in construction projects; $975 million will support emerging and sustainable technologies; and $250 million is to convert more sites into High Performance Green Buildings, GSA Administrator Robin Carnahan said in a statement after the law’s signing by President Joe Biden.

“Military bases are important to the DoD mission, but DoD doesn’t do a great job of taking care of its buildings. And it certainly doesn’t do a good job of improving their energy efficiency,” Robyn said. “Military services simply don’t see the link between energy efficient buildings and their mission in the same way that they do see the link between renewable energy on their bases and mission.”

Aligning clean energy and other sustainability goals with agency missions is a central recommendation to her latest report, published this month for the Information Technology & Innovation Foundation. Robyn said this is needed, along with appropriating more funds for building upgrades, changing “perverse budget rules” and overhauling the federal procurement process.

“Sustainability needs to become a core competence of procurement officials,” she said. “But in the short run, the administration needs to shore up the provisions that are already in the Federal Acquisition Regulation, but that tend to get overlooked, calling for lifecycle costing and focus on energy efficiency.”

She echoed recommendations from Steve Schooner, the Nash & Cibinic professor of Government Procurement Law at The George Washington University Law School. During his appearance on Off the Shelf back in January, Schooner said the pressure on contracting officers to go after lowest price, buy American and redistribute a certain percentage of dollars to small and disadvantaged businesses makes it hard to prioritize sustainability and lifecycle costs.

He said dropping the “tyranny of low price” would take cultural change. But the FAR could be amended to make it easier to procure green technology, such as cleaning up guidance in Part 7, requiring greenhouse gas benchmarks in Part 15, or upgrading Part 46 to verify that contractors reduce emissions like they promise to do — among others.

Meanwhile, DoD, GSA and NASA did solicit public comments in October to determine how to measure the social cost of greenhouse gas emissions in procurement decisions. Despite what Robyn described as shortcomings in the military’s approach to building efficiency, she held up DoD, NASA and the Department of Health and Human Services as examples of innovative buyers in her report. Government can inspire market demand for greener technology and sustainability metrics, but only if it can stomach the higher upfront costs for those innovations.

What these agencies had in their favor, she argued, was that innovation was indeed part of their respective missions, thus giving them the financial leeway to spend on novel technologies or make trailblazing procurements.

“Agencies can do that when something is in their mission interests, because they can get the funding to pay more for the technology upfront, when they are the early adopter of it, they typically have to pay more for it, and then they are able to bring the cost down,” she said.

For example, DoD and NASA spurred “the commercialization of integrated circuits, computers, jet engines, Earth orbiting satellites, solar photovoltaics (PV), and many other technologies that have enhanced mission performance. In 2020, the Department of Health and Human Services (HHS) followed a similar playbook in committing to buy hundreds of millions of doses of a COVID-19 vaccine that did not yet exist,” she wrote.

This better ensures that agencies stick to their benchmarks even through changing administrations, as well.

Energy savings performance contracts are one solution to third-party financing of federal building efficiency upgrades, as the energy service company would install and maintain building equipment at no up-front cost to the agency in exchange for a share of the utility savings. Initially, the Office of Management and Budget, and the Congressional Budget Office opposed ESPCs as a form of federal borrowing. Throughout the 1990s, the Energy Department, the Environmental Protection Agency and the White House sought to increase ESPC use. In 1998, OMB changed its policy on the grounds that payment occurs only if the utility savings materialize. However, CBO’s continued opposition prevents further expansion of ESPCs, according to a 2016 report from the Task Force on Federal Energy Management at DOE.

This example, among others, led Robyn to recommend that OMB and CBO examine how budget scorekeeping rules constrain efforts to achieve sustainability goals.

“[The] OMB approach to budget scoring of federal investment in federal real property … you have to pay for it up front. The federal budget is a cash budget, there is no capital budget, [the] kind of budget that corporations have and many state and local governments have for making long-term investments in infrastructure, or other capital assets,” she said. “And so if you’re GSA, you have to fund a $300 million building renovation entirely upfront. That’s like trying to buy a house without access to a mortgage. It’s very difficult, and I think it’s problematic, I think we should change the scoring rules.”