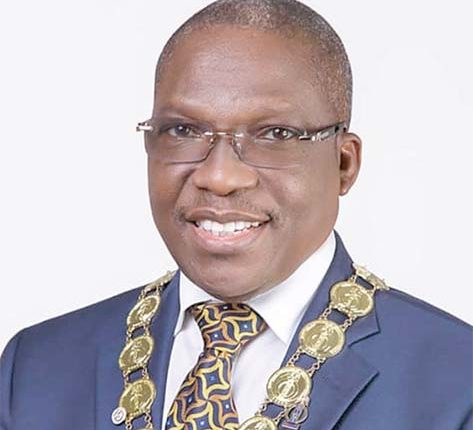 QS Olayemi Shonubi (FNIQS), the President, Nigerian Institute of Quantity Surveyors (NIQS), in this interview with DADA JACKSON, bares his mind on a number of topical issues. Excerpts:

Who is QS Shonubi and when did you assume office as President of NIQS?

Thank you very much. Michael Olayemi Shonubi is a graduate of University of Ife (now Obafemi Awolowo University), Ile-Ife where he obtained a B.Sc. Honours Degree in Quantity Surveying.

He was elected a Corporate Member of the Nigerian Institute of Quantity Surveyors (MNIQS) with Membership No. 1079 on 15th February,1994 and a Fellow (FNIQS) in March 2015 He is a Registered Quantity Surveyor (RQS).

He undertook training in Arbitration organised by the Quantity Surveyors Academy (QSA) in Jan 2019 and on successful completion, became a Certified Construction Arbitrator CCArb.

He was admitted into the prestigious Institute of Directors(I.oD) Nigeria in March 2021

He started his professional career as a Quantity Surveyor with Acon Associates Ltd in Ibadan in 1982 as a Trainee and on completion of the compulsory National Service (NYSC) was employed by the firm at the Lagos Office until February 1991 when he left to join Landquest Limited, a Property Development Company, as Construction Cost Analyst.

Due to his hardwork, commitment and dedication he was promoted upon completion of the requisite probationary period, as Project Manager and Head of Projects Unit in July 1991.

His over 30-year career path cuts across a wide range of projects in Infrastructure, Residential, Commercial, Educational, Industrial, Agricultural and Religious Buildings. Aside from traditional Quantity Surveying Services, he also offers Project Monitoring/ Due Diligence Consulting services for some Financial Institutions.

He is a Patron of the St. Dominic Choir of St Dominic’s Catholic Church, Yaba.

Tell us what the QS does in the construction process.

A Quantity Surveyor is the Construction Professional trained to provide total cost and procurement management of capital – construction /infrastructure- projects from conception to commissioning and maintenance, in all sectors of the economy thereby ensuing value for money.

Therefore, a Quantity Surveyor has a vital role to play in prudent costing and management of projects, procurement planning and budget implementation, post contract auditing, project management and project cost monitoring in the construction industry.

Given his role as impartial arbiter during the construction process, he is also involved in alternative dispute resolution.

It is significant to reiterate that for any project where costs and most especially, value for money, is of the essence, then a quantity surveyor is inevitably required.

What is your take on the worrisome development of the incessant building collapses being witnessed in the country with particular reference to Lagos State?

It is most unfortunate and do not bode well for entire construction industry as the impression is being seemingly created that our construction professionals are either incompetent or that there are no effective regulatory controls to prevent these from happening or stem this rather unconscionable trend. \

Unfortunately, this may also affect investments into this sector of the economy as no sane investor will want to put his funds where they may be lost.

There is therefore, the urgent need for government at all levels to engage the stakeholders in the industry on how to stem this ugly trend through collaboration in ensuring adequate and effective regulatory control of the entire building process.

At a forum not too long ago, you prescribed death penalty for owners of collapsed structure especially when lives are lost, do you still share this sentiment?

If someone is involved in the construction of a building, either as a developer or construction professional, which subsequently collapses with attendant loss of lives and it is established that the collapse was due to sharp practices or abuse of procedures by him; shouldn’t such persons be charged for murder? Why should someone who stands to benefit from such sharp practices that lead to a building collapse walk away freely while the families of the victims, particularly where such are breadwinners, are left to suffer not only the loss of their main source of sustenance but sadly their loved ones too.

Sometimes, the deaths arising from building collapses are not limited to the victims who were working or present in the building at the time of the collapse, but also some of their dependants, who also pass on due to the pain of the loss.

So really, if we actually want to put a stop to the spate of building collapses, there is the need to take drastic and stringent measures such as death penalty for those who are found guilty of any wrongdoing that leads to the collapse particularly where such results in deaths.

Are you not worried that up till now, the National Building Code, is yet to see the light of day?

It is most unfortunate because the spate of building collapses all over the country can also be attributed to the non- promulgation of the National Building Code which is subscribed to by governments at all levels.

The National Building Code is meant to prescribe minimum Standards for Construction of various building types so as to ensure that the developers not only engage qualified construction professionals to supervise developments from inception to completion, but also use prescribed standards, quality as well as quantity of materials and components on their developments.

Upon promulgation, it is expected to be adopted by all the States or at least domesticated to suit their peculiarities.

The implications for non-promulgation are grave for the industry especially as some of the work in the industry is being undertaken by expatriates who use codes from their native countries which are at variance with those in use by the Nigerian construction professionals thus sometimes leading to confusion.

However it is gladdening to note that some attempts are being made By the Federal Ministry of Works and Housing to see to its enactment while Lagos State Government is also doing the same.

How are you addressing the incidence of quackery in your profession?

We are collaborating with our statutory regulators, the Quantity Surveyors Registration Board of Nigeria (QSRBN) which is a body established by Decree No.31 of 1986(now CAP Q1, LFN 2004) and charged with the overall responsibility of regulating the practice of Quantity Surveying in Nigeria, to monitor projects nationwide.

Aside from this, we have also embarked on advocacy visits to MDAs at levels of Government – Federal States and Local Governments to enlighten them that only Bills of Quantities duly signed and sealed by Registered Quantity Surveyors should be accepted and adopted for use for all projects for the purposes of establishing the Project Costs that will ensure Value for Money.

In addition, we are also engaging the private sector organisations as well as other professional bodies to enlighten them on the need to engage a Registered Quantity Surveyor on their construction projects.

What would you say is responsible for other professionals in the built environment encroaching on your forte?

I believe it is due to the desire for lucre because a quantity surveyor is the only construction professional specifically trained in the cost and financial management of construction, and thus plays the role of the exchequer/gatekeeper for the promoters of the construction project.

I do not believe that this should be encouraged. There is nothing wrong in being a multi-disciplinary professional if you are cut out for it and as such should undergo the prescribed training as well as certification before embarking on such foray, but to practice or put yourself out as a practitioner of another discipline without the prescribed training and certification is not only unethical, unconscionable, but highly unprofessional and such should be discouraged. For instance, I had some elementary training during my undergraduate days in design of concrete structures as well as law of contract but, I will never put myself out as an engineer or a lawyer as I have not gone through the requisite training and certification.

Is it true that there is rivalry amongst the seven professional bodies that constitute the built environment?

There is no rivalry amongst us, and I can assure you that right now we are all working together to ensure that Nigerian construction professionals are well positioned to contribute their quota in the development and maintenance of our infrastructural projects.

It is rather disheartening that the Nigerian construction professionals are previously and still being overlooked in the execution of major infrastructure projects despite having been trained by the same country – most construction professionals graduated from Nigerian institutions where tuition was free hence their trainings were paid for by the country yet rather than patronise them after completion, expatriates are engaged.

This is even in spite of the Presidential Executive Order No. 05 of 2018 and has not abated but rather becoming more prominent in projects being financed by the private sector.

The nation suffers double jeopardy in the sense that her nationals whose training were paid for are unemployed increasing unemployment index of skilled citizens ,but also her scarce foreign exchange is being wasted on nationals of other countries.