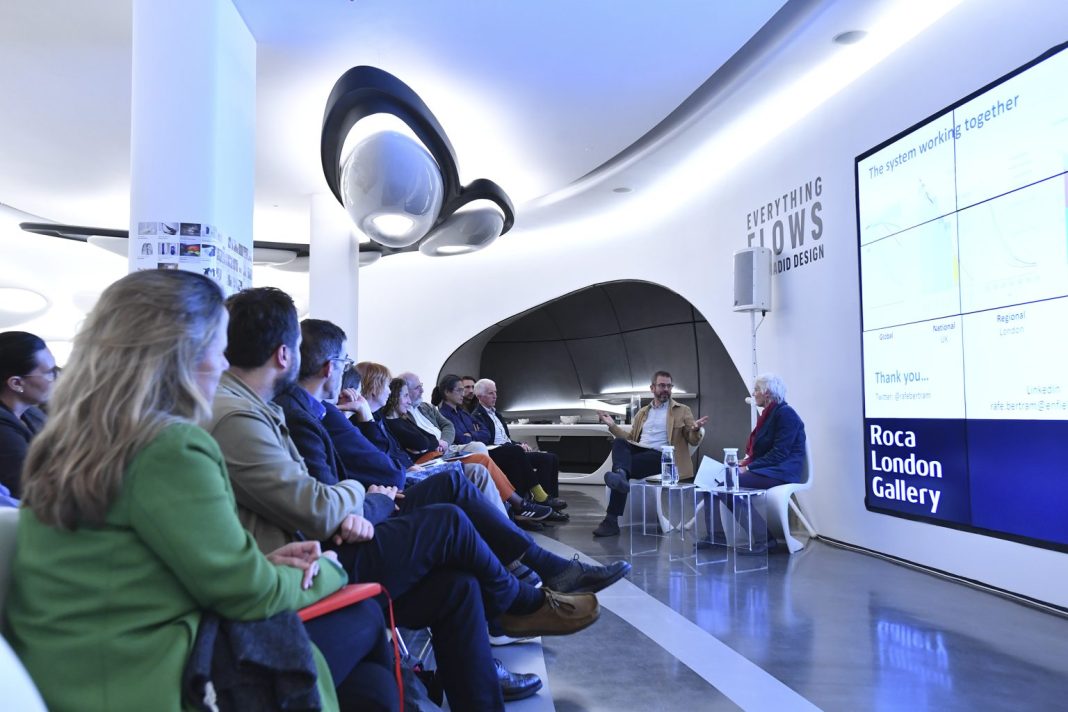 Bertram opened his talk by describing six scales for tackling the reduction of carbon emissions – global, national, regional, neighbourhood, community and household – outlining how governments and other organisations of every size are cutting emissions to meet international targets.

At the national level, Bertram highlighted HM Treasury’s carbon pricing system as ‘incredibly useful’ for ‘delivering [a] … kind of golden thread or green thread from policy to projects, to procurement, to implementation and to use’.

Using Meridian Water as a ‘neighbourhood’ example, Bertram described how Enfield’s ambitious redevelopment programme will reach carbon neutrality by 2030. He explained that mapping out emissions with lead architects and masterplanners Karakusevic Carson and Arup was an important component of an evidence-based approach, because as much as 80 per cent of the Meridian Water development’s carbon emissions will come from construction.

Meridian Water is slated to deliver 10,000 homes and 6,000 jobs on a predominantly brownfield 85ha site in Tottenham, north London. The site is currently home to a gasworks, ‘big box’ retail and warehouses. The first 300 residents will move into the project’s first phase next year.

Bertram expressed his delight that Meridian Water’s emissions projections line up with targets set out by the Greater London Authority. If the housebuilding industry can work with that system, he said, ‘we’ll be able to get all of those reductions working well’.

Regulation, incentives and taxes are the most unsexy, boring, most impactful way that we can change the system

Enfield is currently working with HTA, Hawkins\Brown, Mae, Kjellander Sjöberg Architects, Periscope, Assael and Karakusevic Carson on subsequent phases of Meridian Water, where a minimum 40 per cent of the units will be affordable. ‘Regulation, incentives and taxes are the most unsexy, boring, most impactful way that we can change the system,’ he noted.

Crucial to meeting Meridian Water’s net zero targets is an ambitious material re-use strategy, which includes a ‘material re-use site’ – a physical yard for recycling materials, as well as an online exchange that makes buying and selling-on easier for developers and contractors.

In response to a question from AJ sustainability editor Hattie Hartman about which aspect of Meridian Water he is most proud of, Bertram mentioned material re-use, acknowledging that these are still early days for circular use of materials in construction.

Bertram also highlighted his team’s sustainability initiatives, in particular making sure developers contribute to the carbon offset fund, ensuring that construction is zero-carbon, and promoting the use of locally generated energy.

In the ‘household’ section of his talk, Bertram shared his personal experience of a deep retrofit of his Kentish Town terraced home. Working with Prewett Bizley Architects, the approach was to maximise internal space through interventions such as inserting a home office in the loft, a child’s mezzanine sleeping space and clever joinery throughout to minimise the extent of new build. Targeted fabric improvements were combined with fitting an air source heat pump and photovoltaic panels.

‘It was pretty dramatic,’ Bertram said. ‘We had to take it all back to the brickwork and used wood fibre insulation. And then the new stuff [was made] of super-low embodied carbon materials that can be recycled too … OSB and ply with a particular oil finish. It looks beautiful, feels wonderful, and [is] super-sustainable.’

Ending his talk, Mr Bertram mapped the six scales – global, national, regional, neighbourhood, community and household – against each other, suggesting that sustainable housing schemes such as Meridian Water have a key role to play in global efforts to combat the climate crisis.

‘If we can all work together and do everything that we can possibly can, it kind of works – but we’ve got to do it,’ he said.

Formerly a partner at Foster + Partners, where he worked for 18 years, Bertram joined Enfield Council via Public Practice three years ago. After a one-year placement, he wrote his own job description and stayed on