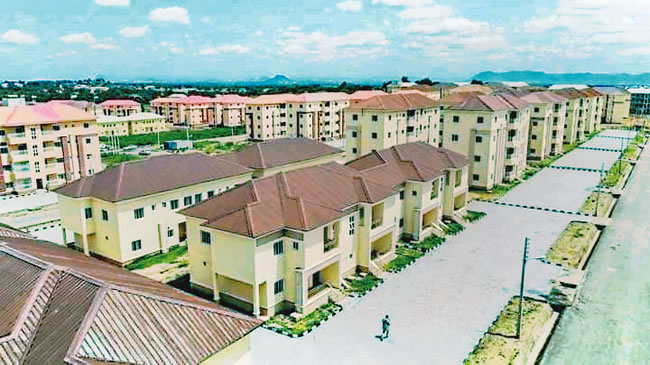 A report by the Bank of Industry highlighting the country’s grave housing deficit reflects the reality that many citizens risk destitution and homelessness. With an estimated gap of 28 million units, the bank says a hefty N21 trillion would be required to close the chasm. This is a major challenge for the federal and state governments to review existing policies and roll out newer, more effective policies to solve the problem.

In its report titled, ‘Institutional Turnaround For The Next Level,’ BoI noted that “with a growing urban population, increasing construction costs, and declining household income, access to affordable housing is becoming more difficult for millions of citizens.” This is not surprising; of the estimated 216 million people in the country, about 95.1 million are projected by the World Bank to be living below the poverty line. Poor people simply cannot afford to acquire homes.

Paradoxically, despite acknowledging the housing challenge and the huge costs required to fix it, the Federal Government budgeted a paltry N470 billion for housing in 2022. Clearly, beyond rhetoric, the central and sub-national governments have not paid adequate attention to this sector.

Though the government’s Vision 20:2020 plan targeted adding 10 million new houses to the national housing stock – 1.0 million units each year with at least 50 per cent in the urban centres – there has been no fidelity towards accomplishing this lofty dream. Instead, a report says only about 100,000 units are added each year and this is mostly through private efforts.

The stark consequences of this failure are visible across the country: slums and urban sprawl leading to poor air and water quality, insufficient water availability, waste disposal problems, increasing population density and demands on urban environments.

Housing, declares the World Urban Forum, “is a key input in economic, social, and civic development.” It adds, “Housing investment remains valuable and a major economic driver, both in developed countries and developing countries.” For this reason, successful economies accord priority to housing. To bridge the gap between the rich and the poor, the Austrian government is providing all residents with social housing, and it has achieved 60 per cent of its target. It promised to provide government accommodation for all by 2030.

Investment in housing creates capital, thereby facilitating capital accumulation, says the Central Bank of Nigeria. Housing contributes 14 percent to GDP in the United States and stimulates a further 6.0 percent in downstream expenditures. It contributes 16 percent in Egypt, but a meagre 3.0 percent in Nigeria.

The UN estimates that by 2050, 75 percent of Nigeria’s population will be living in cities, creating an annual housing requirement of at least 700,000 units to keep up with growing population and urban migration.

Experience shows that an increase in housing production, especially at the lower reaches of the market, stimulates job creation, both skilled and unskilled; and that housing and other infrastructure investment is strongly linked to economic growth. Research in Colombia indicated that five additional jobs are added for every $10,000 (about N4.2million) spent on housing construction. In India, 1.5 direct and eight indirect jobs are created for each housing unit; and in South Africa, 5.6 and 2.5 direct and indirect jobs, respectively, are created.

Availability of housing finance is essential, while sustainable and equitable housing production depends on access to residential land and basic services. An efficient and transparent land administration; legal protections; and a macroeconomic environment that maintains low inflation and cheap loans are also crucial. Making housing finance work for the poor requires the availability of houses at lower prices and access to long-term, low interest credit.

To unleash Nigeria’s housing market’s huge potential to generate high economic value, jobs, and its immediate benefit to unskilled labour, the enabling environment needs to be made favourable. An efficient building society and mortgage sector are essential. The government and the CBN need to collaborate to facilitate a resilient and vibrant financial sector to provide long-term lending.

Successive federal administrations have had loft policy plans, intervention funds, agencies, and development finance institutions. The CBN too has intervention schemes. However, implementation of all these, including the National Housing Policy, has been subverted by the usual constraints of maladministration, nepotism, sectionalism, and policy somersaults. Corruption has crippled those plans.

The institutional framework is weak; intervention funds provided for single digit lending reach only very few; most is diverted, and regulation is ineffectual. With interest rate volatility ravaging the economy, consequently, lenders offer between 22 and over 35 per cent interest for the mortgage sector. This is counterproductive. Home ownership is also constrained by high fees and transaction charges. State governments should address this.

Additionally, changes to the land and legal frameworks would help the housing and mortgage sectors. These include making broader use of state governors’ power to grant consent to land transactions, including sales and mortgages; improving administrative procedures by reducing red tape to register a property; digitising land registries; introducing electronic payments, and simplifying the overall process so that an individual is able to register a property without the need for a lawyer.

A housing survey on Nigeria jointly undertaken by the World Bank and UK Aid in 2016 noted that home ownership could be extended to more than 50 per cent of the population if homes were built for those with an annual income of $2,000 and above. Incremental building, cooperatives, and other forms of housing could meet the needs of another 25 per cent of the market.

The construction sector is weak and needs strengthening to meet the challenges, while the domestic mortgage market is unable to provide sustainable long-term loans to borrowers due to a lack of access to long-term funds. The CBN and financial institutions named this as the number one obstacle preventing growth in the market.

Increased partnership with the organised private sector is crucial to unlatching opportunities in the real estate market, while the use of affordable materials such as plastics, clay and timber can reduce costs tremendously. The three tiers of government should therefore accord priority to housing.