Data-driven housing studies in the developed world have shown that regulations and geography have played a part in reducing the supply of housing in many cities. As a result, new housing construction has been muted by these factors, despite house price appreciation. In turn, some policymakers are exploring adjustments to housing density regulations to increase housing supply.

In contrast, for developing country housing markets there are far fewer such housing studies and there is a dearth of systematic housing data. A recent study on India fills this gap by presenting new detailed housing data across urban India to address two policy-relevant questions:

Understanding which housing amenities are most valued by urban households.
Estimating how urban households adjust their housing choices when either their income or house prices change (the income and price elasticities of housing demand).
Housing Amenities in Urban India: All About the Water and Sanitation Amenity Growth

The study sheds light on housing amenity changes over time, shown in the graph below. Between 1993 and 2018, average household size went down by almost a full person from 4.7 to 3.8, while dwelling areas and the number of rooms only increased modestly. The durability of construction materials improved, especially the use of cement for roofing (asbestos is not yet fully banned in India, and unfortunately is still used for roofing). The most notable finding is the considerable progress in water and sanitation amenities: the share of dwellings with a flush toilet, a kitchen with running water, a shower, and underground drainage has all more than doubled between 1993 and 2018. Although housing amenities have improved, these have come at a cost of increased urban sprawl and longer commute times. 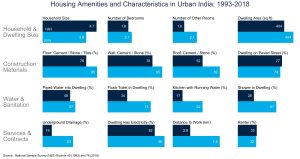 Comparing this to 2018 data for China, urban Chinese households are smaller (the average was 2.6 people), have smaller dwellings (400 square feet) though more space per capita, are more likely to be homeowners (four-fifths homeownership rate) and have better sanitation amenities (four-fifths of dwellings had a bathroom). The starkest difference between the residential built environments is elevation: high-rise apartments are the norm in urban China, while only a third across urban India live in apartments and most are low-rise buildings.

Using households’ rental data and amenities, it is possible to price each amenity as a menu of hypothetical add-ons. This is called a hedonic regression where the features of a composite good are priced individually. The figure below shows the 2018 monthly valuations by amenity. In 2018, the average monthly rent across urban India was INR 3,047 of which the first bedroom is estimated to comprise a third at INR 1,017. Consuming all amenities is out of reach for the average urban household as the cost exceeds average rent. However, water and sanitation amenities valuations, such a kitchen with running water and a flush toilet, are valued almost as much as the first bedroom. In contrast, floor tiles or another room (such as a lounge) are less valued. 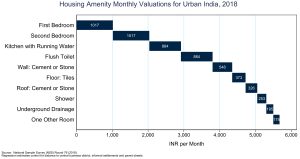 Pricing individual amenities across time can yield a hedonic rental index, and this is shown in the figure below for nine megacities in India along with other house price indices. 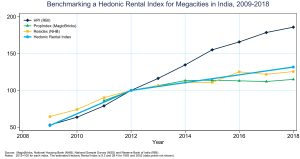 Three of these indices—The PropIndex, the Residex and the constructed Hedonic Rental Index—overlap remarkably well. The divergency of House Price Index (HPI) is likely due to difficulties in like-for-like comparison from municipal transaction data. Given that the Resindex is a pure buyers index and the PropIndex is a hybrid index, the overlap with the Hedonic Rental Index suggests that the rental yield in urban India is not low.

By looking at rents paid across 1993—2018 the study shows that the demand for rental housing has recently started to move with changes in rental prices. This confirms that when rent control and other regulatory scaffolding around urban housing contracts were more prevalent in the 1990s, any changes to rent had negligible effects on housing demand. These price elasticity estimates suggest that the rental market is becoming more efficient. This is an important precondition for the recent real estate investment trust (REIT) regulations.

The main result of the study is that as household income increases, the demand for housing increases at a rate higher than parity (this is equivalent to an income elasticity of housing demand that is elastic or greater than one). This elasticity estimate is very high, even for developing countries, and suggest that housing demand in India is very high. Tying this high housing demand with the amenity valuations above, shows that the water and sanitation amenities are driving this housing demand. This has three main policy implications, one specifically for urban India and two for developing countries in general.

• Policy Implication 1: Boosting Housing Supply via Service Investments in Urban India
As demand for housing is so high in urban India, government housing support should focus on the supply side of housing. More investments in services and systems (especially water and sanitation, as well as transportation and connectivity) is a better use of public resources.

• Policy Implication 2: Rental Markets as a Policy Pillar
Policymakers should explore policies that strengthen rental markets and avoid focusing only on ownership as an outcome. Given the positive spillovers from efficient rental markets to service-sector growth that accrue from intercity labor mobility, rental markets have and will continue to play an important role in service-driven economies.