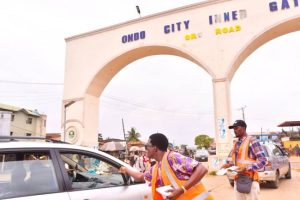 The Ondo State Internal Revenue Service (ODIRS) has embarked on road show in Ondo West Local Government Area to sensitise property owners toward increasing the level of compliance to Land Use Charge in the state.

The ODIRS Head of Department of Land Use Charge, Mr Fidelis Fadugbagbe, told newsmen in Ondo town on Monday, August 1, 2022, that although the compliance level in the area was encouraging, the road show was aimed at making it better.

He noted that most of the commercial property owners in the area had paid, appealing to residential building owners to also comply.

He said that the present administration in the state had stopped multiple charges on property and made Land Use Charge payment convenient for the people.

“People will pay tenement rate, land use and other charges, but the government says that multiple taxation should stop and direct that it should be collected together and later shared based on agreed percentage between the state and the 18 local governments.

“Now, once you pay Land Use Charge, it covers both tenement rate, land use and other taxes,” he said

Fadugbagbe appealed to property owners to pay their Land Use Charge, saying, “it will bring rapid development to their area, aside what the government will do, ODIRS as a collection agency will also encourage them with community impact project.

“The project may be street light, grading of roads or borehole; project within our budget because we are not a contract awarding agency, but we will take it upon ourselves to encourage any community that comply with the payment of their Land Use Charge.

“We will invite the community that are paying and ask them what can we do for them within our budget just to encourage them to be consistent in the payment,” he said

Earlier, the ODIRS Station Manager in the local government, Mr Samuel Awosusi, urged property owners to comply with the payment of their Land Use Charge.

He said the payment was for landlords and not for tenants.