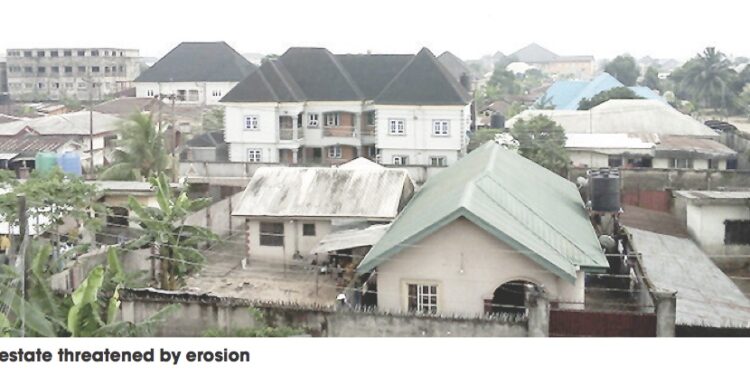 When the Alhaji Shehu Shagari-led administration implemented one of its cardinal programmes in the early 1980s to provide housing estates in different parts of the country, there was joy in the land.

The one for old Imo State was sited in the Ogbor Hill axis of Aba, now in Abia State.

When the Aba project kicked off, those behind the initiative, like in other parts of the country, wanted to use the avenue to cater for the shelter needs of the people, particularly the low-income earners.

However, years down the line, the project, which was targeted at ameliorating the people’s sufferings, is turning out to be their albatross.

What is the problem? Investigation by Daily Sun revealed that the housing estate, although built to specification, has a problem with the main drainage system. It was alleged that, due to lack of diligent execution, the drainage has, over time, created a huge and frightening gully, threatening life and property in the area.

It was gathered that the main drainage system was supposed to collect water from the estate and empty it direct into the nearby Aba River. But during construction, the drainage did not get to the designated point where it could simply discharge its contents from the estate directly into the river without causing any damage.

So, it was not surprising that, at the point where the drainage stopped, it started creating a gully that has today turned into a monster.

The gully was said to have started in 2012 and residents said they have made attempts to checkmate it to no avail. At the moment, houses within the vicinity are at its mercy.

Speaking about the menace, the coordinator of the affected estate, Kehinde Falolu, said, since the gully started, residents have been living in fear.

He said, as the rainy reason is fast approaching, residents are becoming more apprehensive as a result of the speed with which rain has been washing away soil from the erosion site.

He said: “The situation has made people living within the area to become apprehensive as this year’s rainy season is setting in.

“As we speak, some of the residents whose houses are at the mercy of the erosion do not know what to do; they are no longer sleeping with their two eyes closed because of the fear of the unknown.”

Houses in the area are not the only property the erosion is threatening to wash away. Power stations and armoured cables conveying electricity from the Alaoji power substation in Aba to Akwa Ibom and Cross River states are on the verge of being destroyed.

“You know what it means if the erosion should pull down those power installations; the consequences will be unquantifiable,” Falolu said.

On efforts made by residents to checkmate the erosion, Falolu told the reporter that since the gully was beyond what residents could handle, in 2018 they drew the attention of the former member representing Aba North/South at the House of Representatives, Hon. Ossy Prestige to their predicament.

Falolu informed that after visiting the site of the erosion, the lawmaker promised to table the matter before the National Assembly. But unfortunately, before that could be done, Prestige died.

“We alerted our former member, Prestige, who after inspecting the site, promised to take our plight to the national assembly. But, he could not do that before he died.

“His successor, Hon Chimaobi Ebisike also  came, inspected the erosion site and promised to take the matter before the House since it was beyond what he could personally handle himself,” he said.

The chairman of Aba North Local Government Area, had also visited the site, according to the coordinator, but like others before him, he said the problem was beyond the financial capability of the council.

Falolu informed that they equally invited some officials of the relevant authorities responsible for the power installations, who after coming and promising to do something, but reneged.

He was of the view that if nothing seriously was done before this year’s rainy season will be over, many houses would have been washed away by the gully.

The coordinator called on both the federal and state governments to do something urgently to tackle the erosion to save lives and property of residents of the area.

Another resident, Emmanuel Nwanma, who is a patent medicine dealer in the area, said people who do businesses within the area have already started packing out of the area out of fear.

He said: “The erosion is fast encroaching the estate and some people have started packing out of the place and if something urgent is not done, much damage would be done”.

He said every year, the erosion expands in geometric proportion during the rainy season. He expressed worry that with this year’s rains setting in, things might get out of hand.

Nwanma, therefore, called on the relevant authorities to come to their aid and tackle the erosion once and for all.

Iro Ibiam from Afikpo South in Ebonyi State is another worried resident. His house where he lives with his family,  is on the verge of being washed away by the erosion

He said since the erosion started in 2012, they have been making frantic efforts to tackle it, but without success.

While appealing for assistance from government, he said, if something was not done quickly, some houses in the area would be washed away this rainy season.