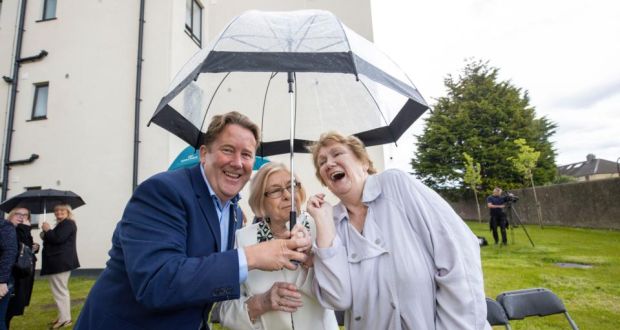 St Agnes in Captain’s Place beside Crumlin village consists of 103 social homes across six apartment blocks. It was built by Fold Housing and opened by Minister for Housing Darragh O’Brien with residents aged 55 and over.

Residents spoke of their joy at finally having a secure place to live, with some describing their new home as “magic”.

All of the 111 residents were previously on Dublin City Council’s housing list, and they have been living in St Agnes for almost two years.

“At the start it was hard on everyone with Covid, and hard on Fold Housing to get things done, but they got through everything, and they are really helpful. Anything you want, just ring Fold, and it is sorted,” said Danny Dennan. He is originally from Crumlin but was living in a bedsit in Bluebell for the past nine years. “I didn’t have a bedroom, it was very small. I got offered this and it’s given me a new lease of life.”

He has gotten to know other residents in his building, and a few residents from the other blocks went to school with him. “I moved out of the area when I was 27, and now I am back and meeting all my old friends.”

Mr Dennan had a bad back for years, so he is delighted to finally have a proper bedroom. “It’s magic.”

“As soon as I got the keys, I moved in straight away. I love it,” said Mr Farley. “We all talk to each other and I can invite my family over too.”

Both of them had been living in bedsit-style rental accommodation. “I couldn’t believe it,” said Mr Reilly. “When you hear there’s a housing crisis and next thing, you’re handed the keys…it’s like a dream come true.”

Dublin City councillor Dermot Lacey pleaded with the Minister for Housing to allow local authorities to build more social homes such as the St Agnes development.

“Please allow local government to do the job we once did in the ’40s, ’50s, ’60s, ’70s and ’80s, of delivering local authority housing right across this city, in a way that allowed many people to live good lives with their families over the generations.”

Cllr Lacey added it was a happy day for residents. “I think this is a wonderful place and I hope you enjoy it for the rest of your lives.”

Mr O’Brien said the Government is working to ensure an age-friendly Ireland where older people can live long and healthy lives, participate in their communities and have a range of housing options and health supports. “St Agnes, Captain’s Place is a model for housing developments for older people and I want to see this replicated nationally.”

St Agnes is designed in accordance with the latest Universal Design guidelines, with features such as grab rails, non-slip flooring and lifts.

Fold Housing is an approved housing body specialising in providing homes for families and older people.

Dublin City Council was the sanctioning authority for the scheme, and it attained funding of more than €20 million from the Department of Housing and Housing Finance Agency.