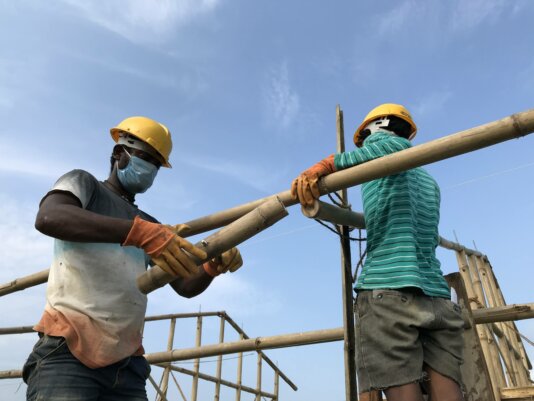 Adopting green architecture practices in how we design, build and power edifices can significantly reduce our carbon footprint. But constructing eco friendly houses using green building materials won’t be enough on its own. We would also need to rein in overbuilding to benefit the environment.

The massive overhanging roof and double facades in the east and west of the Net Zero Energy Building@SDE at the National University of Singapore are deemed a powerful form of climate-resilient green architecture that shades the building from the scorching sunshine of the city state. Reportedly, it contributes to lower temperatures and reduces reliance on air-conditioning – a major source of energy consumption in a tropical area.

Coupled with the use of clean solar power, the environmentally-friendly design has led the building to produce just as much energy as it consumes, demonstrating that the carbon footprint of buildings can be reduced dramatically.

Though it may sound like wishful thinking, industry stakeholders in Asia believe the entire building sector could pull off the same feat, reaching net-zero greenhouse gas emissions through a host of ambitious measures around building design, low-carbon materials as well as efficient building envelopes, lighting and appliances.

This massive undertaking involves cutting both the emissions released during the construction phase, or embodied carbon, and those produced to operate the buildings, and could play a major role in limiting rising temperatures up to 1.5 degree Celsius compared to pre-industrial levels – the defining environmental goal laid out in the 2016 Paris Agreement in order to mitigate the impact of global warming on the planet.

Indeed, the building sector is responsible for pumping more emissions into the atmosphere than transportation and ranks second only to overall industrial production.

Since 2005, the city state has drawn up plans to make its buildings more sustainable, with 80 percent of them slated to go green by 2030 through an all-out effort to reduce energy consumption in a sector that accounts for more than 20 percent of the country’s emissions.

This initiative is just one aspect of a comprehensive green plan that also aims to create more green spaces, boost public transportation and cleaner-energy vehicles while consuming and wasting less. “The green plan 2030 is the sustainability blueprint with targets for the whole country to address climate change,” Alex Chong, Programme Director of Smart & Sustainable Building Technologies at the Energy Research Institute at Nanyang Technological University Singapore, told FairPlanet.

One of the main methods of promoting sustainable building in tropical Singapore is passive design, an approach that aims to decrease their energy demand with several strategies like facilitating natural ventilation and minimising heat absorption, according to Joy Gai Jiazi, a sustainability consultant.

This is achieved, for example, by designing the orientation of the buildings to harness natural wind currents, ensuring the breeze passes through the units, and to protect sun-facing facades from the afternoon sunlight, which generates the most heat. Walls coated in cool paint can also reflect away some sunlight and thus limit heat gain, explained Chong. Furthermore, sprawling greenery on rooftops and building facades has become a familiar sight in the city due to its heat absorbing qualities that reduce overall temperatures inside and outside, effectively countering the urban heat island effect, a typical problem in cities with an abundance of high-rises.

All these passive measures help reduce air conditioning and electric fan usage. In addition, active measures like energy-efficient lighting or sensors that can detect occupancy and switch lights off when needed are also common in Singapore.

A significant portion of this energy is clean, as many of the city’s buildings have solar panels installed on their rooftops. The city is already able to produce 350 megawatt-peak (MWp) of solar energy, and the Housing & Development Board (HDB), Singapore’s public housing authority, aims at a solar power production of 540 megawatt by 2030, equivalent to the energy needed to power 135,000 four-room HDB flats. Reaching this goal could potentially save 324,000 tonnes of carbon emissions per year.

Building stakeholders in the city are also looking at ways to cut embodied carbon – an urgent issue in a city where most building materials are imported from overseas, which involves substantial transportation emissions. But Gai, the sustainability consultant, acknowledges that there are several challenges.

“Singapore Green Building Council has an embodied carbon pledge [to limit emissions]. But the industry still has little knowledge on how to reduce it, it’s a topic people are still learning about,” she told FairPlanet.

One reduction approach involves repurposing or renovating buildings instead of tearing them down and building up new ones from scratch, said Chong, who advises construction stakeholders on how to achieve that. When they do need to be demolished, he added, this can still be done in a more environmentally-friendly manner by recycling their components for new infrastructure.

AFFORDABLE AND GREEN BUILDING MATERIALS IN NEPAL AND SRI LANKA

Several projects spearheaded by the nonprofit housing organisation Habitat for Humanity to provide vulnerable communities living in shanties with safe homes show that there are multiple ways of cutting down on embodied carbon, even in countries with limited financial resources.

“Habitat has committed itself to a people-centred approach and this includes addressing climate change effects,” Gregg McDonald, Habitat for Humanity’s associate director of operations in the Asia-Pacific, told FairPlanet. He added they tried to use traditional materials and design houses to minimise these effects.

In Nepal, Habitat has already built homes for dozens of families by making use of bamboo – a low-cost, abundant and strong material that locals have been using for centuries in construction – specifically treated to make it more resistant to bug infestation.

Bamboo is a formidably sustainable material because it regenerates quickly, taking only “four or five years until it’s ready to be harvested for construction, while soft timber, which has widespread use in house construction, takes around 30 years, with hard wood species taking 60 to 100 years,” said Jim Kendall, Manager of Construction and Appropriate Technologies with Habitat in the Asia-Pacific.

Kendall added that bamboo also captures carbon dioxide and stores it for the entire home lifecycle, which can last up to a century as demonstrated by bamboo structures in Colombia. A study showed that a hectare of bamboo stands can absorb as much as 17 tonnes of carbon each year.

In a similar project in the Philippines, each bamboo house was estimated to save 7 to 12 tons of carbon dioxide emitted compared to conventional concrete construction levels.

Providing durable housing in an environmentally friendly fashion was also at the centre of another project Habitat did in Sri Lanka, where over 700 homes were built with compressed stabilised earth blocks (CSEB), a mix of earth and cement that was locally sourced and thus lowered the construction carbon footprint and the cost involved in transportation.

Since Sri Lanka has to import one of the basic components of cement, called clinker, CSEB can cut transportation emissions by requiring a much smaller percentage of cement without affecting the strength of the blocks. This reduction in cement use is also eco-friendly because “cement is a very carbon-intensive material as it takes a lot of energy to produce it at very high temperatures,” stressed Kendall, explaining the logic behind promoting CSEB. A report found that one CSEB led to about 50 kg of carbon dioxide per cubic metre, while a cement sand block emitted about 130 kg.

As additional environmental benefits, the raw earth found in Sri Lanka didn’t require the addition of sand – whose sourcing to meet the demand for cement is depleting global supplies and wreaking havoc on the environment, particularly water sources  – and can optimally regulate temperatures, cooling homes during hot seasons while keeping them warm in colder climates.

Beyond providing sustainable and safe shelters that improve overall health and increase education opportunities for children, McDonald of Habitat for Humanity believes that the bamboo and CSEB projects have proven to be financially viable models to increase livelihood opportunities by offering construction jobs and training locals in masonry.

“In some projects, we have trained them and they have continued to build houses as an income-generating activity,” he said following the completion of the projects.

HOMES FOR LIVING, NOT AN INVESTMENT

Starting in 2003, China, the biggest producer of cement worldwide, has developed massive urban areas to boost its economic growth, using more cement every two years than the US did in the entire 20th century. And yet, tens of millions of its new homes sit empty, some of them situated in so-called ghost cities with mostly unoccupied buildings; cities that could house the entire population of either Germany, France or Italy.

This building spree has been boosted by the practice of putting wealth into real estate and has contributed to high housing costs that far exceed incomes  – a trend prevalent in plenty of countries. The Chinese authorities are now trying to tackle the problem by implementing measures that cool down the property market, with the overall goal of building houses for living, not for speculation.

Lowering housing prices and making it a less attractive investment will benefit the environment as well by reducing the destructive deluge of cement we pour on it.