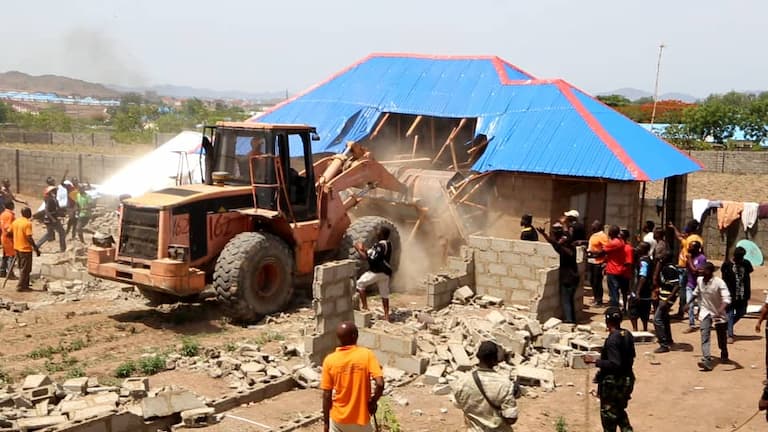 The Senior Special Assistant on Monitoring Inspection and Enforcement to the minister of FCT, Ikahro Attah, while speaking to journalists at the venue, reiterated the fact that local chiefs do not have right to sell land and people should stop buying from them.

According to SSA, “For me, I don’t think I can quantify the houses, there are Development Control workers who are taking note but I can say over 600 illegal structures were pulled down.

“We are not paying any compensation because they violated the law by building illegal structures. We are not done with Zamani community, we have a city to protect. Someone came to offer bribe and the man spoke a language close to my own, I refused, later the indigenous people came and claim the house is theirs but I said no because someone already came to offer me bribe and I refused.

“What is really painful is that we suspended work on Monday in order to allow people to pack but most of them did not do what they should have done. Some persons are thinking government is not serious but they should have known that FCT Minister is really committed in restoring the Abuja master plan .”

Bamidele Taiwo, one of the victims said he bought the land from the Chief.

”My house was affected even now all my family are outside with all my luggage. We later heard that it is people that didn’t settle them that they are demolishing their houses,” he alleged.

Bolaji Ganiyu, who is a victim, said, “I bought land from the Chief of Zamani for N100,000 and he didn’t tell us about indigene or non-indigene. Now they removed our houses and all our properties are outside. When the house was marked, we went to meet the chief, the chief told us to meet Emir of Jiwa and we went to meet him and we even went to Human Right Radio for them to plead on our behalf to give us at least six months’ notice but they refused”.