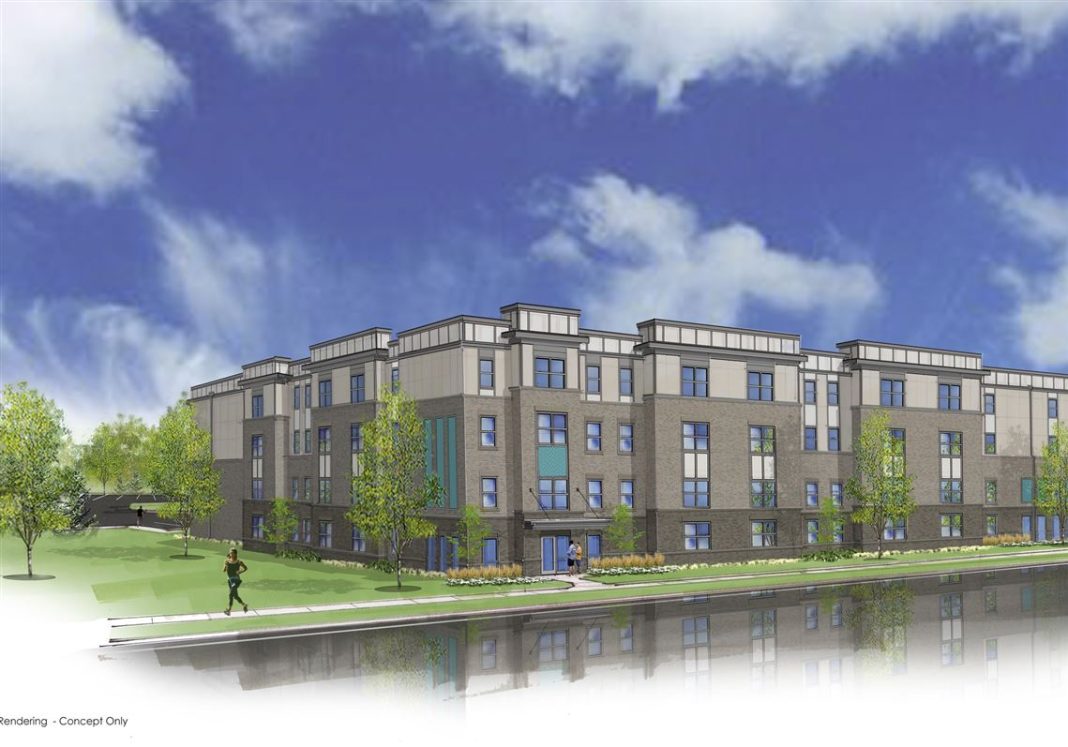 ​A 50-unit Maumee affordable housing project — the first of its kind in the city — is set to break ground within weeks after securing funding from Lucas County and the state.

The $15 million Trailside Lofts by developer MVAH Partners will be four stories and include one, two, and three-bedroom units. The project will be west of the Anthony Wayne Trail and Ford Street intersection, part of a larger development known as Side Cut Crossings.

“Maumee is an attractive suburb, and right now this [affordable apartments] product is not available anywhere in the city,” said Pete Schwiegeraht, a senior vice president of development for MVAH Partners.

The Lucas County commissioners on Tuesday unanimously approved a $1.5 million grant for Trailside Lofts, money that will come from the county’s $83 million allocation of federal American Rescue Plan Act funds.

A year ago, the project secured about $10 million in competitive federal tax credit financing from the Ohio Housing Finance Agency. Mr. Schwiegeraht said the original plan had been to finalize building plans and start construction late last year — but materials and labor costs soared since the developer initially sought the tax credit funding.

That meant MVAH was forced to return to the state to request additional funds — and also ask the county for help from its ARPA allocation — to close the gap caused by “COVID-related cost inflation,” Mr. Schwiegeraht said.

“I can’t say enough about how crucial the county’s ARPA grant is to the project,” Mr. Schwiegeraht said. “It was literally what helped us get this across the finish line.”

The taxpayer financing assistance allows MVAH to charge lower rents, catering to workers making in the $15 to $27 per hour range. Households earning as much as 80 percent of the area’s median income will qualify to live there, meaning a household making up to approximately $60,000 per year will qualify, Mr. Schwiegeraht said.

Rent prices will vary depending on income, but at the high end, will cost about $1,100 per month.

A Trailside Lofts co-developer, the nonprofit Great Lakes Community Action Partnership, will coordinate services such as job search assistance and child-care. The apartments will include onsite management, as well as a community room, and business and fitness centers.

An Ohio Housing Finance Agency document detailing the project’s funding request noted Maumee has “never been awarded tax credit housing” and the only nearby affordable housing complexes are “in adjacent communities that are much more challenging areas to raise a family.”

“The shortage of available affordable housing is complicated by a scarcity of materials and rising costs of construction, making public investment necessary to introduce new affordable units into the community,” county officials wrote of the Trailside Lofts project.

Commissioners earlier this year adopted a spending outline for the county’s rescue plan funds which earmarked $8 million for affordable housing, though Mr. Gerken noted that figure is not a hard cap.

The Trailside project grant — approved by commissioners without discussion Tuesday — is the first to be approved for ARPA funds by the county. Officials are now considering whether to help fund several other housing projects — proposed by Lucas Metropolitan Housing as well as private firms — that have requested assistance, Mr. Gerken said.

The city of Toledo has also recently reviewed federal rescue plan funding applications for several affordable housing projects. Mr. Gerken said the goal is to avoid both the city and county funding the same projects.

Among the projects expected to secure rescue plan funding from the city are two MVAH Partners complexes similar to Trailside Lofts.

The Glen is planned for the parking lot of South Toledo’s partially vacant Southland Shopping Center, and The Grand is slated for the corner of Detroit Avenue and Grand Avenue in central Toledo. The projects are also seeking federal tax credit financing through the state, as well as other taxpayer-funded financial assistance, Mr. Schwiegeraht said.

He said MVAH Partners is also seeking tax-credit funding for two senior housing apartment buildings. One would be constructed at Side Cut Crossings, near Trailside Lofts, and the other would be phase two of the company’s existing Secor Senior Lofts project, at the corner of Secor Road and Monroe Street.