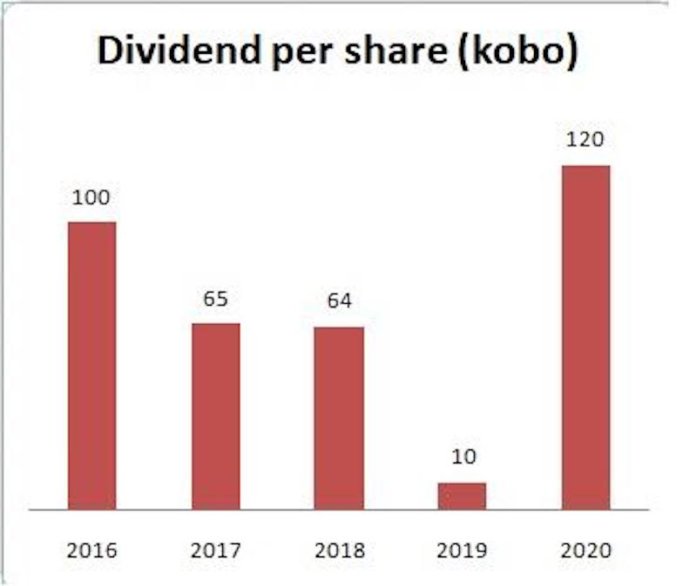 UAC of Nigeria Plc might not improve on its dividend payout to shareholders in 2021 financial year. This is because analysis of its result and accounts for the year under review revealed that profit after tax and profit before tax dropped by 70.4 per cent and 44.3 per cent respectively in nine months ended September 30, 2021

The leading diversified Company, operating in the Food and Beverage, Real Estate, Paint and Logistics sectors of the economy also reported losses in its third quarter (Q3) unaudited results for period ended September 30, 2021.

In Q3 unaudited results, UAC of Nigeria reported 63.2 per cent drop in Operating Profit to N437 million, with operating profit margin contracting by 386 basis points to 1.8per cent from 5.6 per cent recorded in Q3 2020.

The Group reported loss after tax from continuing operations N199 million in Q3 2021 compared to a N1.2 billion profit in Q3 2020.

The weak performance impacted negatively on its stock price on the Nigerian Exchange Limited (NGX) and Basic Earnings Per Share that dipped to a loss of N0.09 in Q3 2021 from N0.15 recorded in Q3 2020.

Over the years, UAC of Nigeria maintained mixed performance in dividend payout to shareholders.
For instance, the company reported N3.93billion profit in 2020 from a loss of N9.26billion in 2019 and paid shareholders a dividend of N1.20 (N3.46billion) as against N0.10 dividend in 2019 (N288million) paid to shareholders in 2019.

However, UAC of Nigeria in its nine months result and accounts improved on its revenue but hike in finance cost and operating expenses, two key financial parameters weaken profits in the period under review.

Paints segment grew by 41.3 per cent to N10.2billion from N7.14billion on account of higher volumes compared to 2020 which was impacted by limited sales due to the restrictions in the movement of people and goods in second quarter (Q2) 2020.

Packaged Food and Beverages segment grew by 39.4 to N17.7billion, driven by volume growth in the snacks, water and dairy categories and price increases in the snacks and water categories; and the Quick Service Restaurants (QSR) segment gained 51.2 per cent to N1.6billion as additions to company-owned restaurants (corporate stores) and improved volumes and performance of existing stores.

The fish feed category in the Group’s Animal Feeds and Other Edibles continued to benefit from customers migrating from imported brands to locally produced brands.

Operating profit in the Animal Feeds and Other Edibles increased by 47 per cent to N1.7 billion in nine months of 2021 from N1.2billion reported in nine months of 2020 on account of price increases to offset higher raw material costs, as well as lower operating expenses.

The Paints segment reported operating profit of 33.7 per cent, lower at N708 million as a result of lower gross margin and increased operating expenses and non-recurring merger restructuring costs in the period totaling N121 million. Profit before Tax was N853million in nine months of 2021, 32.1per cent lower than the N1.3 billion recorded in nine months of 2020.

Associate: Real Estate (UPDC – 43per cent ownership) recorded an operating loss of N512 million in nine months of 2021 as against N379million recorded in nine months of 2020 on account of increased cost of sales as gains on property disposal and reduction in administrative expenses were partially offset by a one-off credit loss expense.

The Group Managing Director, Fola Aiyesimoju in a statement explained that: “The Group recorded meaningful revenue growth of 23per cent year on year and a six per cent increase in operating profit.

“The operating environment remains challenging on account of rising inflation and raw material cost escalation which remains an ongoing concern and as such we are carefully assessing pricing of key products across our portfolio.