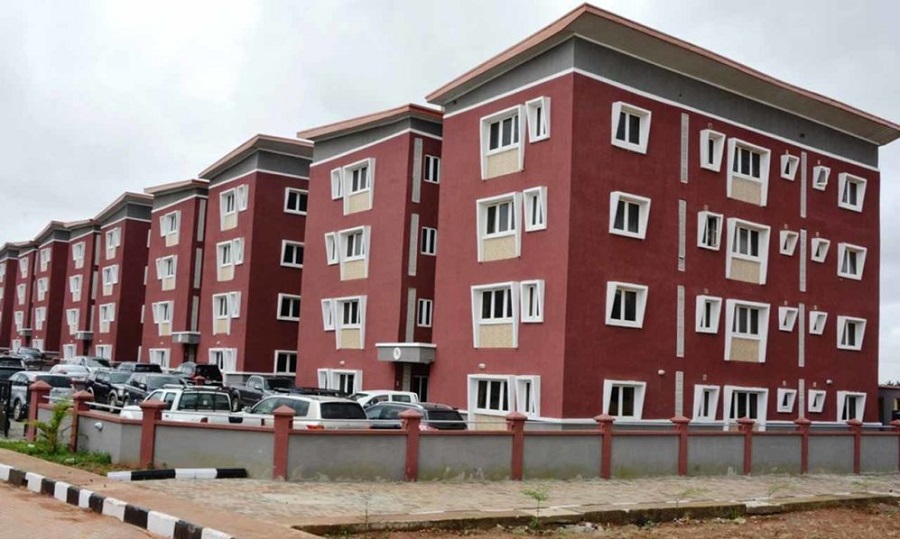 Nigeria’s affordable housing push has led to a boom in new homes, but high construction costs and a lack of development tax mean the majority are too big and expensive for those who need them most.

Chigoziri Onuoha was hoping to spend her final year at the University of Lagos living in the university’s student accommodation, but when she realised the huge demand for spaces could leave her stranded, she decided to rent her own place.

The 23-year-old political science student has been living with a friend and looking for an apartment in Nigeria’s largest city since September, but so far has had no luck.

There are plenty of places available, Onuoha said – but none she can afford. With 200,000 naira ($487) a month to spend from her savings, she said real estate agents have been showing her houses with rent three times as high.

“The rents are crazy,” she told the Thomson Reuters Foundation. “It is frustrating and expensive. I have to pay the agents for every appointment and most times I end up not seeing anything I actually want.”

Private developers in Nigeria have been rushing to build homes over the past decade, as a fast-growing population and a surge in migration from rural areas to the cities puts a squeeze on the country’s housing supply.

But the mix of massive demand, high construction costs and poor market research by developers has resulted in a wave of new two- and three-bedroom houses that few people in Nigeria need or can afford, housing experts say.

“When 60% of Nigerians are under the age of 40 and not married, developers should not be building duplexes,” said Timothy Nubi, director of the University of Lagos’ Centre for Housing and Sustainable Development.

“You do not go to a city and build family houses all over the place, because they will be empty.”

An online search of houses for sale in Lagos and other big Nigerian cities shows that most new houses are large, family homes with rent of more than 1 million naira a year, nearly three times the annual minimum wage.

In July this year, housing minister Babatunde Fashola disputed that Nigeria has a housing deficit.

“There are empty houses all over the major urban centres of Nigeria,” he told reporters. “It is illogical to say we have that housing deficit when (we) have empty houses.”

Boade Akinola, spokesperson for the Ministry of Works and Housing, said the ministry has commissioned a committee that is in the process of auditing the houses sitting empty across the country.

“It is hoped that at the end of the exercise the government will come up with a policy that will (solve) the anomaly,” she said in an interview over WhatsApp.

About 40% of Nigeria’s estimated 206 million people live below the country’s poverty line of 137,430 naira per year, according to the NBS.

But even professionals looking to work and live in the cities are forced to sleep in slums and other unsafe places like bus stops, petrol stations or unregistered accommodation while they wait to find somewhere they can afford to live.

Nigerian filmmaker Alesh Sani said in an Instagram post in October that he was homeless as he struggled to find a place in Lagos that matched the 1.4 million naira he was spending on annual rent for his previous apartment before the lease expired.

“(I am) checking houses online and talking to agents, who are telling me 3 million to 6 million naira and a service charge of 750,000,” he told his followers.

“Who are they building these houses for and where do they want people to get the money?”

Paul Ojenagbon, a property consultant in Lagos, said developers are building larger houses to cover soaring construction costs, which are driven by high inflation and the rising price of imported building materials.

In the past 10 years, he said, “the price of land has skyrocketed and development costs have also increased by over 50%.”

“Developers will transfer the cost to the buyers … If (they) build expensively, they will sell expensively.”

John Olugbemi, spokesperson for MFF Housing, which builds affordable housing for mid-to-low income earners, said the high interest on the commercial loans that many developers tap into makes it impossible for them to sell at a loss.

“Instead, they prefer to leave their houses empty until they can get people to buy them at the price that would help them repay their loans and make a profit,” he said over email.

Nubi, at the University of Lagos, said Nigeria’s lack of development tax is one main reason developers are happy to leave new homes unoccupied.

State governments should charge tax on all new construction, he said.

“If (developers) are paying tax, they will not allow their property to stay idle … they will retrofit or redesign the houses into units the market can afford,” he said.

MFF Housing spokesperson Olugbemi would like to see the government subsidise the cost of building materials and provide subsidised construction loans.

For property surveyor Ojenagbon, the solution is for the government and private developers to work more closely together.

“The government has the land and funds, but the private sector has the resources and manpower to build housing projects,” he said.

That collaboration is already happening, noted Akinola at the housing ministry.

She pointed to a national housing bond that the federal government announced in May, giving developers access to low-interest financing as Nigeria pushes ahead with its 200-billion-naira National Housing Programme aimed at building 300,000 homes for low-income earners.

But for Onuoha, the student in Lagos, none of this helps her find the apartment she needs right now.

“It is painful,” she said. “I want the government to create an environment where Nigerians can rent affordable housing easily.”