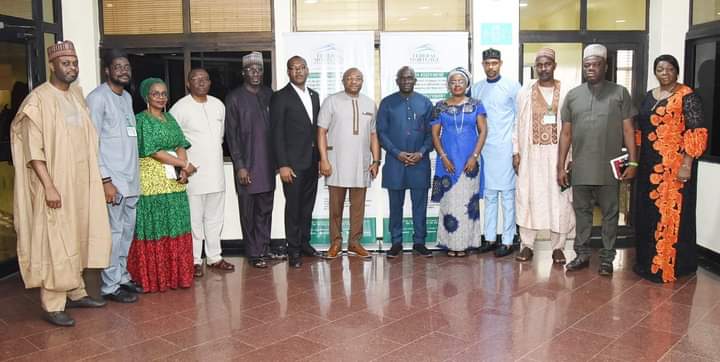 The Nigeria Employers’ Consultative Association (NECA), the umbrella body of employers in the Organized Private Sector, has re-stated its commitment to partnering with the Federal Mortgage Bank of Nigeria (FMBN) to ensure the delivery of decent, quality, and affordable housing to employees nationwide.

Mr. Adewale Smart Oyerinde, the new Director General of NECA, gave the assurance when he recently led other executive members on a courtesy visit to FMBN at the Bank’s headquarters in Abuja.

Mr. Oyerinde said that as representatives of employers of labour in the country, NECA considers the FMBN a critical stakeholder and partner in its efforts to ensure adequate provision of decent shelter for employees. He stated that since the new NECA Management under his leadership assumed office in August 2022, it had prioritized the deepening of the Organization’s collaboration with the Bank.

This includes the continuation of existing ventures such as the National Affordable Housing Delivery Programme (NAHDEP), a historic collaborative project with labour unions including the Nigeria Labor Congress (NLC), Trade Union Congress (TUC) and NECA, to deliver affordable housing to workers nationwide.

The Programme’s first phase delivered over 1,400 housing units in twelve (12) sites across the country’s six geopolitical zones in addition to Lagos and Abuja, in batches of a minimum of 200 units per zone. The second phase is at different levels of completion and will deliver about 2,160 houses in another fourteen (14) locations. House types include finished semi-detached bungalows and 1-bedroom, 2-bedroom and 3-bedroom units in blocks of flats.

“We are here to affirm our commitment to our partnership with the FMBN as a critical stakeholder in leveraging upon the National Housing Fund (NHF) Scheme to provide affordable shelter to employees who contribute to it. We also want to commend FMBN for measures taken to make the NHF Scheme work better and to encourage the new FMBN Management to sustain the tempo of reforms towards resolving issues that affect the smooth operations of the Fund”, he said.

The NECA DG added that the reforms and the execution of the housing projects nationwide have warmed stakeholders’ hearts and demonstrated the practical results of the NHF Scheme.

“FMBN housing projects such as the 102-housing unit site located on the Lagos-Ibadan Expressway demonstrates the reality of the NHF Scheme and its potential to aid access to affordable housing for employees. It shows that the NHF Scheme is not a mirage. We are aware that allocation has already commenced, and we encourage FMBN to see to the project’s timely completion. The property can be a model for FMBN in the Southwest. As representatives of Employers nationwide, NECA is available to help the FMBN in its goal to leverage the NHF Scheme to provide affordable housing to Nigerians, including its employees”, Mr. Oyerinde added.

In his response, the MD/CE, FMBN, Mr. Madu Hamman, represented by the Executive Director, Business Development and Portfolio Management, Mr. Kingsley Chukwuma, said FMBN values its partnership with NECA. He pledged the new Management’s support for a more robust collaboration with the body.

The FMBN MD/CE said the Bank would ensure timely completion of housing projects, including the one located along the Lagos-Ibadan Expressway. He also solicited for NECA’s support towards the timely off-take of FMBN housing estates through mobilization of its members.

“We thank you for the visit and wish to assure you that the new FMBN Management is committed to deepening its relationship with NECA towards providing affordable housing to your employees who contribute to the NHF Scheme. We will continue to work towards improving the operations of the NHF Scheme and ensuring the timely completion of all housing projects. As we do so, we request you to encourage your employees to ensure timely off-take of completed houses to avoid time overrun which is not good for our financial books”, he said.