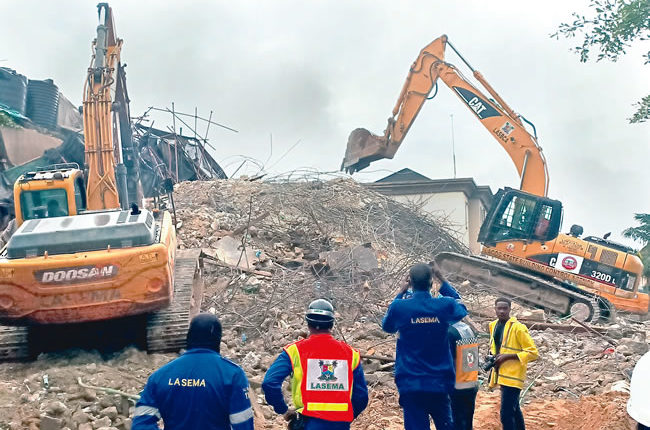 No fewer than 31 incidents of building collapse have been recorded in Lagos in the first half of 2022 (January to July).

According to the monthly emergency trend’s report released by the Lagos State Emergency Management Agency (LASEMA), 24 building were collapsed within the period, while six buildings were partially collapsed and one impending collapse.

Factors not limited to sub.-standard building materials, poor mix of concrete, shoddy construction work,  lack of planning approval,  use of quacks, lack of sub-soil investigation and lack of supervision/monitoring, among others have been adduced for recent building collapse incidents in the country.

Proposing some  solutions, one of the professionals identified simply as “Harmony”  on the official Whatsapp platform of Festus Adebayo-led Housing Advocacy Network of Nigeria,  urged government  to establish a  one-stop center in each Local Government Area, where buildings record management database can be developed  and maintained.

He also called for the revalidation of building permits (not more than seven days of submitting application); issuance of new building permits for new development (within 14 days), adding that building inspection  must be structured into different stages of the building construction activities such as foundations’ inspection approval , elevation levels’ approvals.

“The requirements for the approvals or revaluation must be widely published and any submissions not meeting the requirements should be rejected within the seven days or 14 days as applicable with exact reason(s) of rejection.

“Before launching this program, the professional bodies need to meet in a sessions and develop the requirements for revalidation and fresh approvals.”

Part of the requirements, he said should encompass the necessary certification forms that must be signed and stamped by the respective professionals as part of the documentation for securing the permits or revalidation including name of the project manager and qualification.

“I’m sure after five years with lessons learned more improvements can be developed.

“There must be a formal systematic approach, approved guidelines, procedures, etc. irrespective of God fathers etc.

“There should be a mandatory statutory fees with official receipts to be paid by each construction site when the team from the one stop center comes for scheduled inspections, that helps to fund the third party company or companies running the operations,” Harmony said.

According to him, the company must also have insurance that covers its operations indirectly, taking responsibility for any wrong approvals in addition to other sanctions.

Section 15 of The National Building Code published since 2006 has provision for certification by professionals on site during construction covering all stages of development which should be submitted to Code Enforcement Authority for scrutiny and guidance/approval.

According to him, part of the problem was the inability of stakeholders to explore and exploit the resources at their disposal.

He noted that most government’s agencies have refused to explore the provision of the building code to draw up guidelines and regulations to control development in the environment.

“Worse still, most of our practicing professionals have refused to avail themselves with extant regulations guiding their operations. The result is now starring us in our faces. It is very easy to pass the buck.

“The chief executives in our states should brace up and support their professional staff to do their job. There must be political will to protect our environment,” he said.

Those who have gone through the Riwandan (Kigali) document, Onu said would agree with him that even Nigerian adapt to it the developers and their consultants, they would hardly allow it to be operated.

“Does our planning law not require government and its agencies to secure building permit before embarking on any building work?  How many of our governments have paid heed to this regulation which they made,’ Onu said.

Another professional suggested that buildings inspected and found to be in a high risk of collapsing should be evacuated and demolished.