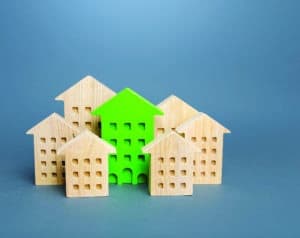 -Asset securitisation deals backed by green buildings surged to 110 billion yuan (US$15.8 billion) in the first half, compared with 123.3 billion yuan for the whole of 2021

-The building sector currently accounts for half of China’s carbon emissions and will need to contribute to a 13.5 per cent reduction in its energy consumption over the 2021 to 2025 period

Asset securitisation deals backed by green buildings surged to 110 billion yuan (US$15.8 billion) in the first half of the year, compared with 123.3 billion yuan for the whole of 2021, according to a report released by Fitch this week. Last year’s volumes had already exceeded total issuance in the preceding five years.

The recent deals have been led by commercial developers seeking access to cheaper funding, increased liquidity, green branding and a broadened investor base, according to the report.

“Mortgage-backed securities in China are increasingly embedding energy-efficient residential or commercial buildings into their asset pools, encouraged by recent policies of Chinese authorities,” Jia Jingwei, an analyst at Sustainable Fitch, the sustainable finance research unit of the credit rating agency, said in the report.

Decarbonising the building sector is crucial for China to achieve its target of reaching peak carbon emissions by 2030 and becoming carbon neutral by 2060. Enhancing green building construction standards and improving building energy efficiency are also among the top policy priorities under Beijing’s 14th five-year plan, which runs from 2021 to 2025.

The building sector currently accounts for half of China’s carbon emissions, according to the China Association of Building Energy Efficiency. It will need to contribute to a 13.5 per cent reduction in China’s energy consumption over the 2021 to 2025 period, and Fitch expects the government to continue tightening rules on building standards and the energy efficiency of buildings.

Only 6 per cent of certified green buildings in China were operationally green, while the rest were only labelled green for design, according to the report. This weakens the environmental credentials of the assets that underlie green mortgage loans, Fitch said.

Green mortgages refer to loans that are used to finance the acquisition or construction of buildings that meet certain green standards, or to finance energy-efficiency improvements of properties, Fitch said.

“The next step for market development [will be] ensuring collateral assets meet green criteria, and enabling sufficient loan data to reflect the credit impact of environmental, social and governance (ESG) considerations,” the Fitch report said.

There would be an around 5 to 20 per cent increase in average construction costs, when it comes to converting supply into green buildings, Colliers said. But this would be offset by a reduction in operating costs once the building is completed, according to the property consultancy’s Embracing ESG report.

Six pilot projects have obtained the first batch of certifications, including an office building constructed by the Shanghai Research Institute of Buildings Sciences Group, as well as a shopping centre and residential complex in the eastern city of Jinan in Shandong province developed by Shandong Genfu Company.