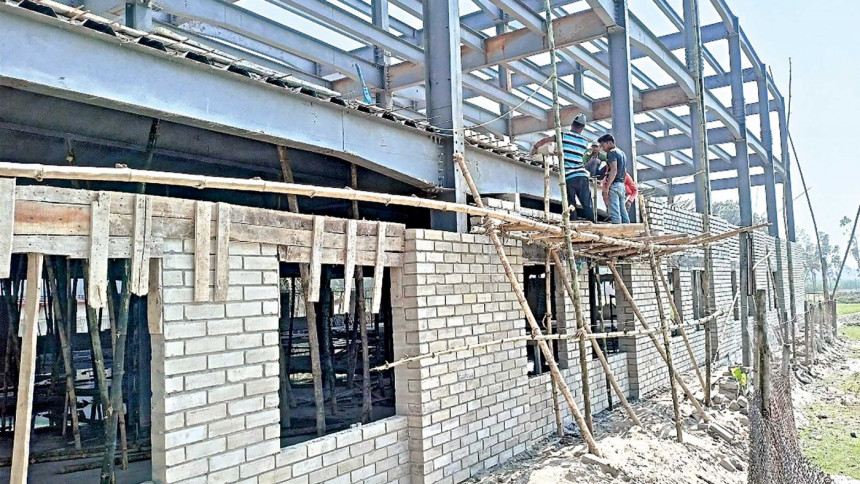 Green building practices have gained momentum in Bangladesh as eco-friendly bricks are being widely used for all manner of construction in a bid to reduce the environmental degradation caused by conventional brick kilns.

The Housing and Building Research Institute (HBRI), a wing of the housing and public works ministry, has been trying for decades to promote green building by developing various alternatives to traditional bricks, which are made by baking topsoil with firewood.

Ismail Hossain, a research officer of the HBRI, said they have developed 30 varieties of eco-friendly bricks that are more cost-efficient and lightweight as well as earthquake, fire, salinity, heat and sound resistant.

Most eco-friendly bricks are made of coarse sand collected from riverbeds mixed with cement while others require the use of stone dust and fly ash, leaving behind the use of topsoil in either case, Hossain added.

Md Shofiqul Islam Dablu, former president of the Shushashoner Jonno Nagorik committee in Nilphamari, said people are now more inclined to using eco-friendly bricks for construction as they have realised the advantages both for themselves and the environment.

The government had issued a notification on November 24, 2019, that made it mandatory to completely phase out the use of traditional bricks in all public construction projects by 2025.

Saiful Islam, senior assistant engineer of the Local Government Engineering Department in Nilphamari, said a number of their projects are now being developed in accordance with the notification.

HBRI Research Officer Hossain went on to say that a good number of private companies have started producing eco-friendly construction materials in order to meet the increased demand.

With the HBRI’s support, real estate companies like Building Technology and Ideas Ltd have already established many structures using eco-friendly materials in both Dhaka and Chattogram.

The Netherlands based Eco Solutions Ltd had set up a factory to produce CSEBs in Haziganj village of Nilphamari sadar upazila back in 2020.

The blocks produced by the unit are comprised of 70 per cent coarse sand, 10 per cent cement and 20 per cent dry soil that was compressed inside the plant without the use of burning coal or wood.

Abdul Wadud Sarker, a construction engineer of the factory, said they currently have the capacity to produce 1 lakh concrete blocks per month.

He then added that a local school, hospital and about 60 homesteads have been built using their blocks.

Similarly, Bablu Super Bricks Industry Limited in Thakurgaon has been producing eco-friendly bricks using 40 per cent fly ash, 40 per cent sand, 15 per cent cement and 5 per cent pebbles ever since it was established a couple of years ago.

Pavel Rahman, a resident of the Sabuj para area in Nilphamari municipality, said the total construction cost of his residence fell by up to 30 per cent thanks to the use of CSEBs as 1,000 of these blocks do the same work as 1,750 conventional bricks, reducing the use of mortar.

“Besides, I can directly paint the walls without having to apply plaster,” he added.

Zoinal Abedin, a resident of Hazipara area in Thakurgaon municipality, said that living in houses make of eco-friendly materials is more comfortable as are they are both heat and cold resistant.

HBRI sources informed that aside from big companies, 2,500 small-and-medium factories for eco-friendly construction materials have been set up throughout the country on private initiatives.

“We provide training to 50 masons and other relevant people every month in order to provide skilled manpower for the construction of buildings with eco-friendly materials,” said Ahsan Habib, principal research officer of the HBRI.

According to sources in the Department of Environment (DoE), there are 6,500 to 10,000 traditional brick kilns in the country that produce 22.71 billion pieces of brick annually.

Besides, the use of earth collected from arable lands is big threat for food production and an obstacle to achieving the Sustainable Development Goals by 2030, which includes attaining food security and sustainable development in agriculture, said Abu Bakkar Siddik, deputy director of the Department of Agricultural Extension in Nilphamari.

Abdul Hamid, director general of the DoE, said they are working on a roadmap to curb environmental pollution caused by brick kilns and that using eco-friendly blocks in all construction is an effective measure to this end.