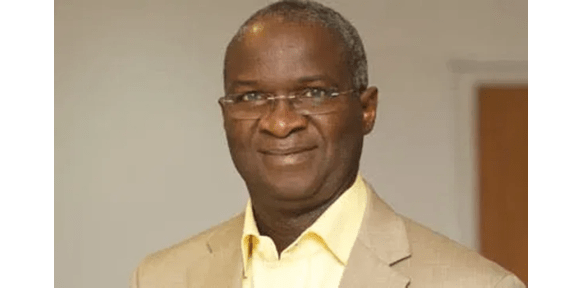 The Minister of Works and Housing, Mr. Babatunde Fashola (SAN), has said state governments could apply on behalf of their residents and indigenes for the houses currently being subscribed to from the National Housing Programme across 34 states of the country. He spoke at the Executive Session of the 11th meeting of the National Council on Lands, Housing and Urban Development, which held in Sokoto, the Sokoto State capital. Fashola said the state governments could apply to fund the acquisition of parts of the National Housing Programmes constructed in their states should they desire to do so adding that after the acquisition, the state governments could then allocate to interested residents and indigenes.

He said: “Let me use this platform to inform the meeting that State Governments can apply on behalf of their residents or indigenes to fund the acquisition of parts of the National Housing Programmes constructed in the states should they be so desirous.” The minister informed the gathering which had in attendance Governor Aminu Tambuwal, State Commissioners in charge of Housing and land matters, law makers, the Permanent Secretary, Mr Bashir Nura Alkali, senior Ministry officials and representatives of various stakeholders in the Housing Sector, that the policy was good. While expressing delight that the National Housing Programme that was initiated by the Ministry under the Muhammadu Buhari administration is now delivering on its objective, the Minister added that apart from stimulating the economies of the 34 states and the Federal Capital Territory (FCT) in the communities where work is being undertaken, the construction sites have become and remain centres of supply for building materials and other commodities.

The minister, however, pointed out that whatever the Federal and state governments could do by way of housing construction was limited compared to what the private sector could do adding that the evidence out there showed very clearly that the bulk of housing in the society and across the world was delivered by the private sector consisting of individuals and corporate bodies.

He said: “In this regard, I am happy to report a visible increase in the participation of the private sector in Nigeria’s housing sector.” He said added that the evidence of the development of estates across the nation could be seen, read and heard on the many media platforms in the country, stressing that: “This is most welcome and must be encouraged.” On the theme of this year’s Meeting, Fashola, who said the message emphasized the need for the collaboration of all levels of government and the private sector in housing delivery, declared, “From what I have said so far about what the Federal Government is doing, what the states are doing and what the private sector is doing, the Nigerian housing sector is heading in the right direction even if there is more work to be done.” The minister said even with this realization, there was need for consciousness that not everybody wants a house built by government adding that there are those who would wish to build their houses themselves and only seek access to land. He said: “We must, therefore, reform the process that governs the allocation of land and issuance of title documents such as Certificates of Occupancy,” adding that: “While the Federal Government has land mainly acquired from the States, the bulk of the work that needs to be done lies with the State Governments because of their almost total control of land by virtue of the Land Use Act”.