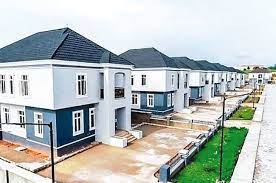 The issues of accommodation deficit and challenges confronting the Nigeria’s housing sector were again brought to the fore during the annual African International Housing Show last weekend in Abuja, with all stakeholders suggesting new alternatives to providing more shelter for citizens rather than playing blame games. DAYO AYEYEMI reports.

It’s no longer news that Nigeria has an acute housing deficit estimated to be in the region of 22 million, which would require N6trillion to fix.

Besides, to properly tackle the accommodation shortage, the nation will need to build one million housing units per year in the next 20 years to bridge the deficit.

Currently, the nation (both government and private sector) can only produce 75,000 housing units annually, which experts said was a far cry from what is needed to solve acute accommodation shortages among the citizens.

The nature, challenges and ways to effectively solve Nigeria’s severe shortage of housing units among the low and middle income Nigerians  were brought to the fore last week when all stakeholders in the sector converged on Abuja, on the invitation of the organisers of the 16th Africa International Housing Show.

Report Ad
The event, which brought together policy makers, real estate developers, mortgage providers, building materials manufacturers and other service providers, threw light on some naughty challenges confronting the provision of mass and affordable housing delivery in the country and also provided opportunities for other experts to share their experiences and suggested major ways out.

They also agreed that there was no shortage of policies and programmes enacted by various governments to tackle the problem, but effective implementation had remained a persistent dilemma.

In this year’s conference themed: “Housing For All, The Role Of Governments In Creating An Effective Enabling Environment,” stakeholders were urged to devise new alternatives to providing more shelter for citizens rather than playing blame games.

Declaring the event open, the Vice President, Professor Yemi Osinbajo, promised that the Federal Government would deliver over 50,000 homes by 2023 to ensure that all Nigerians are accommodated.

The Vice President was represented by the Managing Director, Family Homes Fund, Mr Femi Adewole. He assured that by December 2022, the government would deliver about 25,000 homes across 11 states with strong prospects for up to 50,000 homes in 2023.

The vice president said that in 2020, the programme was slowed down because of the coronavirus pandemic which impacted on the economy.

“By 2020, when along with the rest of the world Nigeria was faced with the Covid-19 pandemic and the resultant impact on the economy, the government swiftly reacted with the N2.3 trillion programme which include a N200 billion National Social Housing Programme aimed at delivering homes for Nigerians on low income. That programme to be implemented by the Family Homes Funds working in partnership with state governments and the private sector will create up to 300,000 homes and about 1.6 million jobs,” he said

Adewole, who made his position known at the conference, however, called for continued synergy between the public and private sectors in order to effectively deliver on the government’s housing mandate.

Adewole lamented that access to affordable housing remains a critical challenge which has not been resolved over the years. According to him, the housing challenge in Nigeria is presented in two primary forms which include the inappropriate housing supplied to meet the needs of a rapidly growing population and the right proportion of existing stock and substandard housing which do not meet widely accepted standards.

He stressed that about 75 per cent of the 42 million housing units we have in Nigeria are substandard. These challenges, he said posed constant threat to citizens as many struggle to survive due to lack of food and sustainable shelter.

Adewole said the government has continued to support the Nigerian Mortgage Refinance Company, officially established in 2015 which guaranteed and allowed people to access the capital market competitively to finance mortgages.

“The work that NMRC does is critical in deepening and increasing access of Nigerians on low income to housing, particularly home finance,” he said.

He added that the government also provided infra credits to motivate a wide range of investors, particularly the Pension Funds, to invest in key infrastructure projects including housing.

According to Adewole, the Federal Mortgage Bank of Nigeria and the Federal Housing Authority currently have a formidable and experienced board and executive management team who are well positioned to lead the transformation of the two critical institutions in the Federal Ministry of Works and Housing to drive affordable housing delivery in the country.

Speaking on: “The role of the Capital Market in solving the Housing Problem in Nigeria,”   Onyema noted that the housing situation in Nigeria isn’t only plagued by a shortage of affordable housing, but also quality building, which has come increasingly to the fore with the recent incidence of collapsed structures in some states.

Speaking on how capital markets can address Nigeria’s housing deficit, Onyema said the Nigerian capital market could be a good engine for driving economic growth and development.

He said, “Estimates of the amount required to meet Nigeria’s current housing deficit needs are put at over N6 trillion. The total budget for capital expenditure for the Federal Ministry of Works and Housing for 2022 is N470.14 billion, while the amount earmarked for the Federal Government Special Intervention Programme is put at N7 billion for the current year.”

Capital raised helped expand the reach of projects that could be undertaken, hence helping to solve the financing challenge in this space. In the last decade, we have raised over N72bn (~$175m) on the Exchange for major real estate companies such as UPDC REITs, Abbey Mortgage Bank, and UACN Property Development Company through a mix of equity instruments including IPOs and rights issues.”

“On the Fixed income side, the Exchange has a market capitalization of about N23T with a significant portion of this capital deployed to the infrastructure and housing sectors.

“Also, NGX as a foremost exchange platform in Nigeria’s capital market provides the requisite platform for institutions such as the Federal Mortgage Bank of Nigeria (FMBN) and Nigeria Mortgage Refinance Company (NMRC) to list and raise equity capital in addition to their existing bond issuance programs.

He said in their opinion, the Pension Fund Administrators also have a part to play using the capital markets to ease the challenges in the housing sector given their over N13 trillion in Assets Under Management. He also said PFAs can increase their exposure to the housing value chain by allocating more resources to this sector in the form of equities, bonds, REITs, etc pursuant to PENCOM investment guidelines.

Senate Committee Chairman on Housing, Dr Sam Egwu, observed that the private sector has contributed more in closing the deficit gap than the public sector.He commended the private sector, most especially the Real Estate Developers Association of Nigeria (REDAN) for its continued effort in ensuring that more homes are developed to bridge the nation’s housing gap.

“The private sector has done better than the government in the area of housing delivery. If you build a house that is not affordable for citizens, you have not built a home for them”, he said.

Managing Director of Octo 5 Real Estate, JideOdusolu, said that increasing housing deficit in Nigeria, has gained less attention from the government, hence placing a lot of responsibilities on the private sector.

Odusolu said that Nigeria’s performance in providing decent homes is very low owing to its poor technology base.

He condemned the attitude of governments in the area of social housing provision, saying “the Nigerian housing conundrum is a source of constant confusion.”

He went further to say that “when we want to change things, we must leave the government at the door. Policies must chase innovation, not innovations chasing policies. It’s a known fact that If we do not innovate, we will die! Social housing is a government responsibility, but it’s unfortunate that they have relegated it into the background.

“If housing can be fixed, the Nigerian economy will be greatly transformed. Digital solutions make the quality of life easy, with numerous added benefits like tracking credits, flexibility etc. The future of real estate revolves around technological innovations. The greatest hindrance to investment by Nigerians in the diaspora is trust, lack of efficiency, and lack of transparency.

“The real estate industry is on the cusp of a digital revolution similar to FINTECH and GSM. The power of digital platforms is enhancing real estate transactions. To unlock the housing deficit in Nigeria, real estate has to go digital”, Odusolu revealed.

Prof OlumideOlusanya of the Department of Architecture, University of Lagos, who spoke on ‘Innovation in Housing Design and Technology for Large Scale Production’ noted that the problem of Nigeria is not corruption but lack of industrialisation, adding that “is either Nigeria industrialises or it perishes.”

According to Akinwumi, “until we rescue the Federal Mortgage Bank of Nigeria from its parents, I mean the Ministry of Works and Housing and then become an autonomous entity, tackling the issue of monopoly may be a mirage.”

He defined the sharing economy as the value of taking underutilisedassets and making them available online to a community leading to  a reduced need for those assets, pointing out that startups like Uber, Bolt and others utilize the power of the sharing economy.

CEO, Cutstruct, JohnOamem, said if stakeholders follow all the things discussed in the 16th edition of the housing show, all stakeholders will all be smiling next year.

He said his firm built an ecosystem where value strives, like popular Uber. He noted that despite the fact that technology has been changing the world, Nigeria sadly lagged behind.

Director of Research and Innovations Office, University of Lagos, Professor GbengaNubi, said that no matter how hard the private sector and other stakeholders tried, the sector cannot make progress if the government refused to play its role.

According to him, affordability is hinged on  three factors namely cost, income and term of repayment.

He pointed out that the cost for construction is high because most materials are imported.

Former Minister of Mines and Steel, Arch. Musa Sada, emphasized the importance of providing a secured environment to allow housing development to thrive.

Managing Director and Chief Executive Officer (CEO) of Africa International Housing Show, Mr Festus Adebayo, called on the government to develop a housing data so as to put the issue of housing deficit figure to a permanent rest.