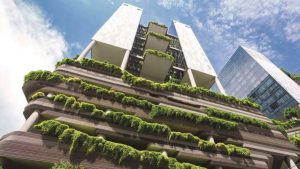 Green nature facade of Parkroyal on Pickering hotel building in Singapore city. PHOTO | COURTESY
Sustainable Development Goal 11 (SDG 11) is all about making cities and human settlements more inclusive and self-sufficient. The newly constructed Nairobi expressway has given the entire East African region a touch of class. I recently used it and never missed feeling the breeze that is so noticeable once you are up there.

What’s going on beneath the road has sparked a new round of controversy. The contractor used a sophisticated agricultural technology known as vertical aquaponic farming to cover the highway pillars, also known as hydroponic farming or soilless farming.

The beautification of the Nairobi Expressway has revved up discussions about the rise of green cities. The green plants on the pillars of the expressway are a visible indication of the enormous pressure that climate change is exerting on us.

As the world’s population rises, we need to develop modern, sustainable cities to accommodate everyone. We need a modern, intelligent urban design that generates secure, affordable, and resilient communities with green and culturally inspiring living conditions for us to survive and prosper.

I cannot stop thinking of what else is green on the Moja expressway; is the expressway beautification a beginning to the long journey towards greening it? It is clear that more effort will need to be put in when building infrastructure projects as way of indicating Kenya commitment to climate action mitigation and adaptation.

During COP26 in Glasgow, countries continued to make their commitments on achievement of a net-zero world by 2030. While getting countries to commit to national-level climate policy can be challenging, cities are often more capable of doing so.
City leaders worldwide have taken it upon themselves to develop and build sustainable, eco-friendly infrastructure and systems to reduce carbon footprints. This, on the other hand, has brought the conflict of development versus adaptation and a balance has to be struck.

Green development will definitely cost more money in the beginning but the benefits, in the long run, will outweigh the costs.

All over the world, cities have made commitments and ambition around climate change and more so on the achievement of the SDGs. This phenomenon is resulting to more climate-oriented cities and those that care about future generations.

Focus is on building, water systems, waste management initiatives, transportation, power suppliers and efficient service delivery. Climate change has become a key driver towards rise of green cities. This shows willingness of the world to change and remain committed to tackling the climate crisis.

According to a recent analysis, over 50 of the world’s leading cities are on track to limit global warming below 1.5 degrees Celsius and mitigate the worst effects of climate crisis.

Even though cities cannot solve the crisis alone and many do not have the capacity and resources required to take up the task, donors and governments should come in handy with frameworks to assist them with capacity and finance to achieve sustainability standards.

Governments should also take action in decarbonising cities and cut emissions by 2030. There is a clear indication that cities have come together to implement climate targets and plans, and this is a momentum that should not stop. Access to finance remains crucial in achieving these goals.

Meeting climate and SDGs targets will require governments, private sector and development partners to accelerate finance for climate implementation into the cities. There should be a decision to reach out to the most vulnerable cities and support urban climate adaptation and resilience through commercial financing as well as grants and especially so for the already vulnerable cities that are bearing the burden of the climate crisis.

Donors and development partners should also capitalise on opportunities found in various cities, which will also act as examples for replication and scaling in other cities. The initiatives should also focus on innovations and opportunities available to maximise effect of the economic stimulus that will stabilise cities and make them self-reliant.

Cities and governments should be aware of the effects of climate change in destroying and disrupting human health, livelihoods, and key infrastructure. There are huge losses that are incurred when elements such as floods, heatwaves and droughts happen, and hence the dire need to have mechanisms to reduce such losses.

Effects are not only felt from the infrastructure investment but also the supply networks and resource flows, which means that issues such as food and water security can affect cities that are not directly hit by climate change.

The leadership of a particular city can help save the earth for future generations by investing in and embracing solutions addressing climate catastrophe. This will even be better when policies, planning, finance, and other enabling elements are considered by governments, private sector and development partners to achieve these goals.