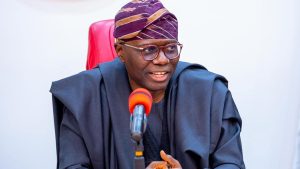 • Alleges use of state apparatus to dispossess him of property
• Complainant refused to appear in court, says attorney-general
The Group Managing Director of Master’s Reality International Concept, Mr. Olaide Adebowale Omotola, has petitioned Lagos State Governor, Mr. Babajide Sanwo-Olu, over a grand plan to dispossess him of a property he bought about four years ago on Iju Road, Agege.
Omotola, in the petition, said those who want to take the land from him were using state government’s apparatus to carry out the task.

According to him, those who sold the land to him have testified before a committee set up by the Ministry of Justice to handle the case of land grabbing brought against him that he bought the land from the land-owners.

He said to dispossess him of the land, he was allegedly called by a land grabber and it was based on this that the structure, still under construction, was pulled down by the Lagos State Special Taskforce on Land Grabbing.

He maintained that the matter is not a case of land grabbing as being made to look like, but that of a land dispute. Omotola alleged that aside plans to dispossess him of the land, there was also an attempt to cow him with legal process.

REACTING, the state Commissioner for Justice and Attorney-General, Moyosore Onigbanjo, yesterday, denied the allegation, saying that Justice Olatunde Oshodi had issued a warrant of arrest on Omotola but he refused to present himself before the court.

Onigbanjo added that the allegations against him and others by Omotola were blackmails aimed at helping Omotola to escape facing his charges.
“If indeed the documents were forged as he alleged, why not go to court and make a case for the charges to be dismissed based on his allegations. We will issue a full statement later.”

“The reason for the above is because I demanded for a compensation of N76 million for the demolition of my property and for me not to get this, there is a grand plan to discredit me, embarrass me and put me in custody.

“I will not be intimidate because I am a stakeholder in the state, am a tax-payer and via my company, we have paid over N200 million government fees in 12 months and this can be verified from the account of Masters Reality Intl concepts Ltd. I deserve respect and not intimidation. I hereby call on the governor’s intervention.

“It has become apparent to me how the attorney-general has been hell bent on using the judiciary to embarrass my person and send put me in custody for his own selfish and personal interest,” Omotola alleged.