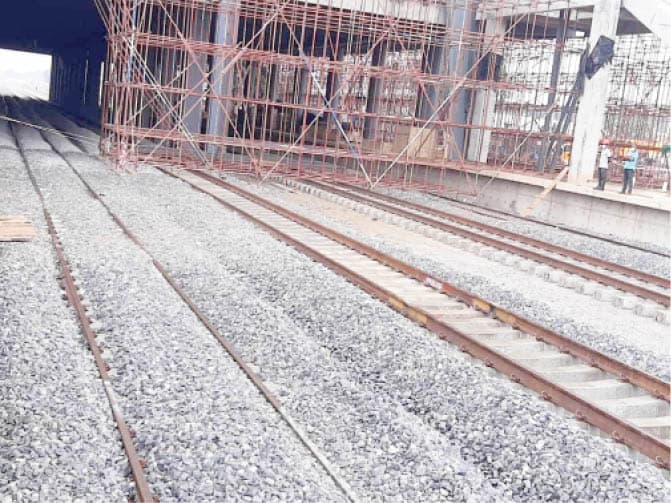 A section to link the Lagos-Ibadan standard gauge railway to the Apapa Port in Lagos has stalled one year after the rail line began passenger service just as the contractor, China Civil Engineering and Construction Corporation (CCECC), has demanded a $300 million (N124.3 billion) as the outstanding sum.

The passenger service commenced before the commissioning on June 10, 2021. However, the unfinished Apapa Port section has stalled freight services, which would have fetched the federal government huge revenue from lifting cargoes from the port to the hinterland.

Daily Trust reports that the Lagos-Ibadan railway was originally designed for 157-kilometre from Ebute-Metta Lagos to Moniya, Ibadan. It was later extended for another 6.5 kilometres to Apapa Port to decongest it.

The track-laying reached the port at the APM Terminal where it has stalled for one year. CCECC said it was because a building housing the Nigeria Customs Service (NCS) was within the right of way, with just 100 metre of track left to link the rail to the Apapa Port quay.

According to a progress report presented by CCECC to a joint National Assembly Committee on Land Transport, which visited the Obafemi Awolowo Train Station in Ibadan, Oyo State, obtained by this paper, CCECC cited five hurdles.

They need a working space for the transitional line at Apapa APMT, which it said was to be available on 4th July 2021 by APMT. The Customs building was to be demolished but that has not been done.

Deputy Managing Director of CCECC and the Project Manager, Mr Xia Lijun at the meeting said, “Yes passenger services have commenced with over 140,000 conveyed in the last one year. Yes, the passenger service is important but to make profit, you need freight. The customs building has been there for the past two, three years. We can’t demolish it.”

The CCECC also urged the lawmakers to prevail on the Ministry of Transportation to release $300m for the outstanding works comprising 27 pedestrian bridges and seven bridges in Lagos and Ogun States.

More so, the signalling and communication equipment was yet to be installed due to the absence of a dedicated powerline.

“To have a lot of trains running on the standard gauge, we need signalling. We implore the Federal Ministry of Transportation to provide a budget for this,” said the project consultant, Engr Precious Ebare.