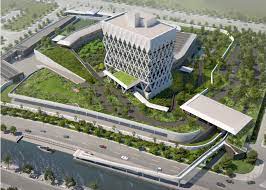 The government of the United States has been accused of going into business with Gilbert Chagoury, a Nigerian-Lebanese developer and funder of Eko Atlantic, despite his criminal records.

Chagoury who was born in Nigeria to Lebanese immigrants co-founded the Chagoury Group in Lagos in 1971.

The conglomerate owns construction, real estate, hotel, glass and flour milling businesses, is the promoter of the Eko Atlantic project, which started in 2008.

The project is privately funded by South Energyx Nigeria Limited, the developers and city planners, a subsidiary of the Nigeria-based Chagoury Group of companies.

The company is working in partnership with the Lagos state government and is supported by the Nigerian government.

In May 2019, the US mission in Nigeria announced that it had purchased about 50,000 square meters of land at Eko Atlantic city to build its new consulate.

The consulate is expected to be the largest US consulate in the world.

However, the development has raised concerns about President Joe Biden’s pledge to tackle international corruption.

A Bloomberg report quoted Matthew Page, the state department’s lead intelligence analyst on Nigeria from 2012 to 2015, to have said the department was not privy to the decision of the US to locate its consulate at Eko Atlantic.

“We did not have input into that process, or we would have flagged that,” Page reportedly said.

The newspaper also quoted a source as saying objections to the consulate deal were raised within the US mission to Nigeria as negotiations were ongoing but they were disregarded.

The 76-year-old Chagoury has reportedly spent decades cultivating relationships with politicians in the US and Nigeria.

His company reportedly flourished in the 1990s through its close association with the late Sani Abacha, former Nigerian military ruler.

In 2000, he was reportedly convicted by a Swiss court for laundering some of the funds Abacha looted from Nigeria.

Chagoury reportedly agreed to pay a fine of about 1 million Swiss francs (about $600,000 at that time) and handed back $66 million to the Nigerian government.

He denied knowing the funds were stolen.

Between 2012 and 2016, Chagoury reportedly sought to help fund election campaigns of US politicians believed to be ‘supportive of his cause’  the protection of Christians in the Middle East.

One of the campaigns he funded was that of Jeff Fortenberry, a US lawmaker, in 2016.

Fortenberry was convicted of concealing information and making false statements to US federal authorities who were investigating illegal contributions made by Chagour, a foreign national, to his re-election campaign.

Fortenberry resigned from office after his conviction.

Chagoury, however, reportedly paid $1.8 million in fines in December 2019 to resolve the investigation.