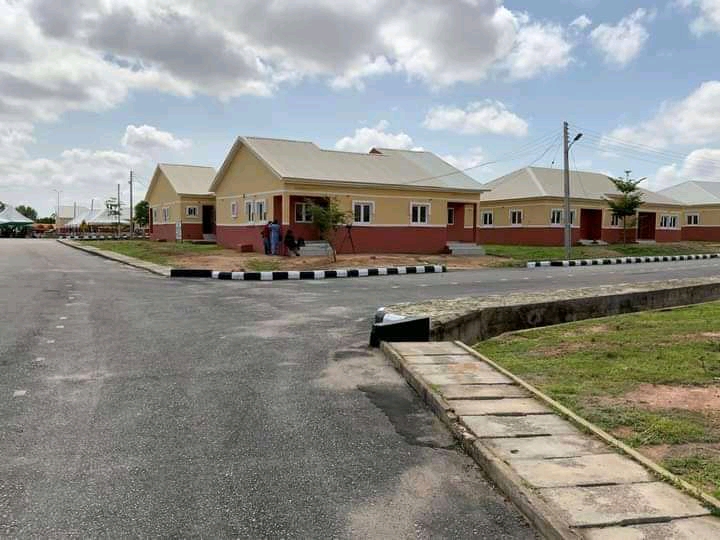 The president, who was represented by Alhaji Muazu Jaji, Minister for State for Works and Housing, said the housing estate was in fulfillment of the administration’s electoral promise to Nigerians.

Buhari said this was one of the projects undertaken in phases by his government since 2016.

“With the support of the Taraba State Government which  provided the land, this place, which was once an unused land, amounting to no more than idle capital, has come alive and will now provide shelter for the ordinary Nigerians.

“This is a good example of some of the developmental possibilities that inter-governmental collaboration can produce. I am optimistic that with the provision of more land, the Federal Government certainly can do more.

“The progressive idea which my government seeks to achieve is to improve human condition,“ Buhari said.

The president said that the housing estate had brought achievements in many ways, pointing out that the estate had created many jobs for Nigerians.

According to him, micro, small and medium-sized businesses which drive the nation’s economy were the ones which were awarded contracts to build the houses.

“They engaged suppliers who benefit from subcontracts for the supply of building materials, sand, cement, roofing and plumbing materials, doors and electrical fittings.

“In the process, the ordinary Nigerians at the bottom of the pyramid such as artisans, builders, skilled and unskilled workers and food vendors were not left out of this economic value chain.

“These are some of the people our government remains committed to move towards prosperity and away from poverty and we are already reaching them by providing opportunities for employment for those who were hitherto unemployed,“ the president said.

In his remark, Mr Babatunde Fashola,  Minister of Works and Housing, said that the ministry had delivered similar houses in 34 states of the federation and the Federal Capital Territory.

Fashola said that the project was the outcome of the national survey conducted by his ministry to find out the types of houses Nigerians desired.

According to him, the survey revealed a prevalent need for bungalows in Northern Nigeria and flats in the Southern Nigeria.

The Minister, who was represented by Mr  Solomon Babafilo, Director of Public Building in the ministry, said that the government was certain that the products that were delivered were acceptable to those they were meant for.

In his speech, Gov. Darius Ishaku of Taraba commended the Federal Government for providing houses for Nigerians.

Ishaku, who was represented by Mr Anthony Jelason, Secretary to the State Government, said that the state had also keyed into the vision of providing housing for the masses.

He said that the state had developed an affordable housing scheme for its citizenry under the state mass housing Programme  which is referred to as DDI Housing.