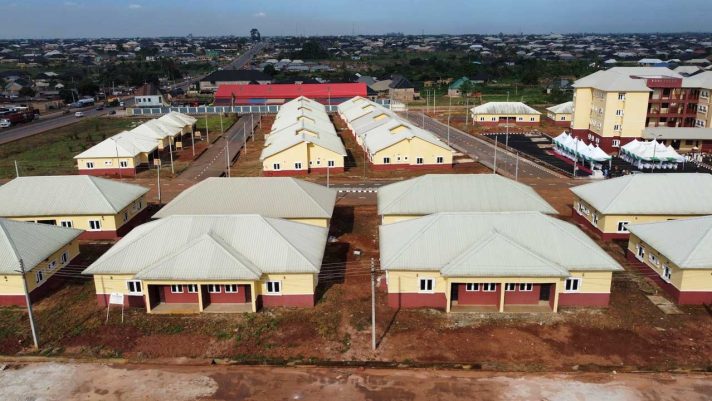 Towards taking advantage of the existing gap in the market, property developers are shifting focus to the development of smaller housing units, usually sought after by millennials and first-time homeowners.

Nigerian families have continued to face harsh economic realities due to inflation that rose above 15 per cent in March 2022, spacious and high-end apartments have gone beyond the budgetary limits of the salaried class and upcoming adults in major cities.

Many property developers are also finding it hard to offload units built for high –end of the markets, hence the paradigm shift towards studio apartments and other smaller housing units.

The trend for studio apartments has been gaining momentum in recent years across major cities, particularly Abuja, Lagos and Port Harcourt, where there is considerable demand, with many developers catering to this niche segment of the market.

The apartments combine a living room, bedroom and dining room into a single large room. Additionally, a kitchenette may either be included within this room or in a small separate room and a small bathroom as well.

The Guardian gathered that the size of such apartments generally range from about 400 square metres to 600 square metres and are occupied by first-time homeowners, singles, young professionals or young small families with price range from N15 million to N25 million, for outright buyers.

Findings revealed that the trending design does not mean that the units are cheap especially, those located in highbrow areas like Lekki, Victoria Island, Ikoyi, and other areas in Lagos mainland.

Confirming the development, the Managing Partner, REFin Homes Limited, Mr. Kazeem Owolabi, explained that the economy has become too harsh for most Nigerians, who can no longer take up large housing units. He said the idea of staying in a big compound is also becoming obsolete.

The trend with the studio apartments now, he said, is that they are well equipped with basic infrastructure like 24-hours power supply/inverter, Internet facility, water and other social amenities.

Whereas, he noted, if there were bigger housing units, it would cost the developer more to put those basic facilities into place. “There are a lot of singles, particularly ladies these days who stay too long before they get married and ‘baby mamas’ who can afford to take a studio apartments.

“Most middle class people prefer to own their home and those who have a house in the suburbs but work in cities because of the traffic situation prefer studio apartments close to where they work, they will take it up any day and that is why the market is increasing everyday.”

For instance, if you build a semi-detached terrace in a 650 square metre space in any location and you can sell it at N45 million or above but on the same 650 square metres, you can have 10-flats or studio apartments; sell it at N15 or N20 million per one. People will be fast at buying at that rate and the investor will make more profit,” he said.

The Director, EchoStone Nigeria Limited, Mr. Sammy Adigun, observed that most people want to live in the urban centres, adding that this influence the development of smaller housing units.

“The demand for such units are based on the need of the market and not that they affordable housing. As an investor, you must recover your cost; they are not under affordable housing because people have to pay the premium. Instead of going to stay in a three-bedroom in Gwagwalada, most people will rather stay in a studio apartment in the city for convenience,” he said.

A fellow of the Nigerian Institution of Estate Surveyors and Valuers (NIESV), Mr. Sam Eboigbe, said the real estate market is just like other markets influenced by the fundamental principles of demand and supply factors.

He said: “Developers are interested in products that will guarantee optimal returns since time value of money is crucial and if the studio apartments, one and two bedroom units are in that bracket then your guess is as good as mine.”

Eboigbe, who is Principal Partner, Sam Eboigbe and Company said: ” Location of the project is a key factor as certain categories of home buyers have preferences and their decisions have considerable influence on the market. The post COVID-19 era witnessed some refinements in the market space as investors know that the smaller housing units are increasingly the choice of home buyers.

“The larger units of three and four bedroom apartments based on emperical market analysis are usually the last to be sold out. Expatriate clients in the pandemic era have cut down on their foreign stay as working from home lifestyles have dominated the real estate sector and those that come around without the entire family units have no need for larger units anymore. This has huge impart on the choices home buyers make in the market space.”

He further said affordability of the housing product is not in doubt as the listings are offered in most cases as off plan or finished products and the units are sold out in considerable record time.

“Prices of the products in the market space have continued to rise due to the escalating cost of building materials, epileptic performance of the naira against the dollar, high interest rate, unexplainable increase in land value. The Developers are offering designs of extreme luxury and comfort in this category to give range of choices to the buyers,” Eboigbe said.

The Senior Partner, Akin Abraham & Associates, an estate surveying and valuation firm, Mr. Abraham Akinropo, said studio apartments are gaining traction largely due to growing population of first-time homeowners/buyers, adding that revolution in Financial Technology (Fintech) and accessibility to startup funding by many young Nigerians were also fueling the trend.

Akinropo said: “Unlike before when you find many young adults staying with their parents, most of them are moving out to a concentration and environment, where they can pay attention to their dreams. That is why studio apartments are gaining more recognition because they don’t need much, just where to sleep, do their job and move on.

“The labour force of our economy is made up of homeowners, who live in the outskirts, but they need to work within the Central Business Districts (CBDs) and so often, they cannot afford to take additional large three or four-bedroom apartments. They will rather take a studio apartment. By this, they reduce the cost of commitments in the city.”

According to him, some developers have also discovered that with the high cost of construction, they cannot afford to build exorbitantly, hence, the need to invest where there is market.

“Developers have to be mindful of market by making products tailored to the needs of the market. It is the needs assessment that determine development. Also, we don’t have the land in the city centres anymore. People now tend to go vertical; there is limited space to go horizontal. You find out that what can be done is to go vertical, build a lot of studio apartments and allow market to dictate. The market pricing plays a role because if you look what is generated from multiplicity of studio apartment, pays more than having three-bedroom because of operating expenses,” he said.

To him, because of the growing need of such development that they are in vogue now, however, he said flexibility in designs would help to quickly turn around the studio to a larger apartment when market demand for them fades.

He said: “There is going to be a down time for such innovation and it may trend for the next five years maximum before it revolves into another thing. Since it is real estate development, their typical challenges range from regulation to design and others. But a peculiar challenge is management. A lot of times, where you find such apartments, they lack adequate management. Some of them, in less than two years, would have lost their value because of their multiplicity. There will be issues with plumbing, electrical, building fabrics because of wear and tear. Operating expenses may become higher because of the multiplicity of the units.