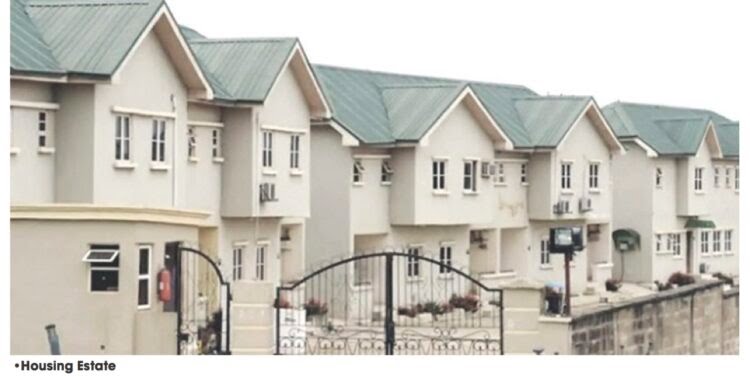 The state of the housing sector is one of the parameters by which the health of a nation is situated. Over the years, the Federal Government had laid out programmes to address housing deficit in Nigeria, without much success. The gap still yawns.

In fact, accessibility to affordable housing remains a mirage, particularly to the middle and lower classes. According to the National Bureau of Statistics, Nigeria’s housing deficit by 2012 was 17 million units. The figure is still increasing.

Real estate mogul, Dr. Alex Obiechina, attributed Nigeria’s inability to meet its housing target to a number of factors, including rising cost of building materials, multiple taxes and inaccessibility to land, among others. Maintaining that these factors drive real estate prices and rentals through the roof, Obiechina submitted that Nigerians deserve stable and dignified housing, which is essential to human existence.

Obiechina said: “It is clear to everybody that we have serious housing deficit in the country. And if we do not do anything urgently to address it, it will not take long before the cost of accommodation will be so high, it will be difficult for  Nigerians to meet up. If we want to address this problem, we must be sincere to ourselves. The challenge before us requires that government should sit up in its role and other stakeholders like estate developers and others will key in.

“What the government needs to do is to make accessibility of land easy. A situation whereby it is very difficult for estate developers to get land to develop for people to buy or rent is not the best for the country. If government makes land easy for developers to procure, more houses will be built and accommodation will be cheaper.

“Another important thing for government to do is site and services scheme, whereby government will provide basic infrastructures and the estate developer will develop the land for the masses. If this is not done without further delay, it will be difficult to achieve.

“The other part of it is, even if you make land accessible but you don’t give certificate of occupancy (C of O) to the developers, it becomes difficult to access loan from banks or even people who want to buy it, for them to access loan to be able to pay for the property, therefore, government must fast-track the issue of giving C of O to estate developers and individuals. It shouldn’t take eternity for someone to get a C of O; it’s something that can be done in a very short time.

“Another important area, which government must address, if we want to be serious is the issue of providing basic infrastructures in the layouts. Things like water and electricity should be provided to augment efforts of estate developers and builders. Government needs to perform a kind of social service role and augment whatever is being done by the industry players. By so doing, prices can be moderated.

“It is also important that we strengthen the mortgage institutions and make them more accessible to developers. It should be done in such a way that not only people working in government circles will benefit, so private individuals can easily access funds from there and buy houses. It should be structured in a way that both the rich and the low class will have access to facilities provided everyone will pay back.

Obiechina also regretted the rampancy of building collapse in the country, saying it was embarrassing. He blamed it on poor structural design, poor compliance with specifications/altering of design, poor quality control, improper foundation, negligence, incompetence and corruption.

Take this from Obiechina: “Buildings collapse most times is because of incompetence of the contractor or malicious acts on the part of the contractor whereby concrete is not properly mixed to required specifications. If the right proportion is not followed, the building is bound to collapse.

“Another thing that causes building collapse is the size of rod used. If you use it wrongly, it could lead to that. In other words, the use of materials can lead to the collapse of a building. Another factor is faulty design. If the structural engineer did not calculate well and then gives a design where the structural element you are putting cannot carry the building, it will collapse.

“Apart from improper supervising by the engineer or architect, another thing that can lead to building collapse is an act of God such as abnormal wind and earth tremor. These are above us; they are within the realm of God. But the general ones we can address are incompetent workmanship, poor building materials, poor engineering design system or reluctance on the part of the contractor to do exactly what the structural engineer has put in drawing.

“Also, the owner of the building influencing the use of poor quality materials for the construction of the house can lead to the collapse of the building. You must also bear in mind that the soil texture is also important. Even when you have done other things well, poor soil analysis can lead to building collapse.

“So, in a nutshell, the people to blame if this happens are the structural engineer, the owner of the building, the architect, if he is not supervising well, as well as the town planners who are supposed to have supervised and seen the loopholes and put them in correct shape before allowing the buildings to be constructed. So, it is a combination of factors and I think it’s important that all of us in the building industry sit up to avoid buildings collapsing. It’s embarrassing to see buildings collapsing and claiming lives.”

The renowned developer also frowned at the tax regime, saying that accommodation seekers bear the brunt.

According to Obiechina, “there’s a lot of taxes everywhere. In the building industry, all manner of charges and taxes exist, which contribute to increasing the cost of building houses. And at the end, such charges and taxes are transfered to the buyer of the property. So, multiple taxes are not good for a nation facing serious housing deficit because it affects overall housing delivery in the country.

“When I built ACO Estate in Abuja, my idea was to have houses that you could rent for about N50,000 unlike what was obtainable in Area 1, 2 and Wuse, where rent was about N1 million for a three-bedroom flat then. But look at the situation today. Today, one-bedroom is going for about N700,000 in the estate. When we had the concept, that kind of accommodation was supposed to cost about N25,000. But because of the fact that housing is not increasing proportionately to the number of people entering the city, this terrible situation is being witnessed.”

Obiechina, therefore, urged government to reduce the number of charges, levies and taxes so that the cost of buildings will come low and help to achieve the hope of the majority of Nigerians owning a house or affordable accommodation.