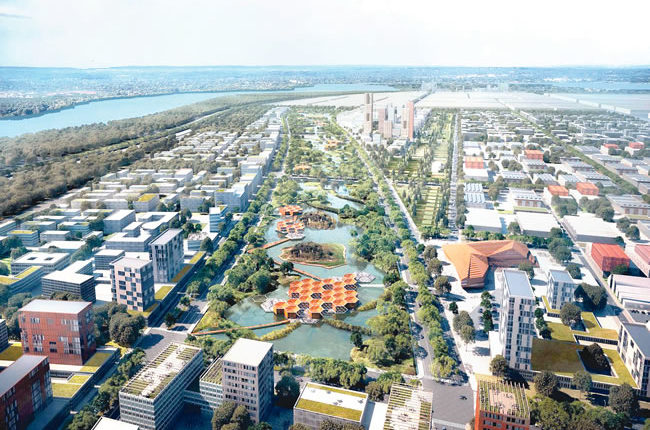 Against the background of rising inflation in the country coupled with low purchasing power of people, values/prices of lands across Ibeju, Lekki Free Trade Zone and environs have kept increasing. However, experts/analysts said the best time to invest in the Lagos’ real estate market is now, giving various reasons. DAYO AYEYEMI, reports.

Despite the rising inflation and depreciation of Naira against Dollar, experts in the real estate sector are of the opinions that there are no better time to invest in the Lagos’ property market than now.

Their advice is hinged on the rising land’s values and property’s prices across Lagos market, especially in Lekki-Epe and Lekki Free Trade Zone (LFTZ) environs.

They noted that the rising inflation has been increasing the attractiveness of real estate as an asset class to investors in this corridor in their bid to hedge against inflation and garner reasonable yields.

This attraction, according to them, has resulted in the rise of investments in housing and landed properties.

Findings by the Nigerian Tribune revealed that due to the increase in land’s values in Lekki FTZ and environs, many developers in the axis have commenced upward review of prices of their plots in the neighbourhood.

For example, the developer of Alaro City, a massive real estate development by Rendezvous, has commenced upward review of residential plots in the new city.

Going by the new price, plots of land in Alaro city within the low density area now costs $121 per square metre (sqm); plots within medium density cost $135 per sqm; while plots within high density cost $150 per sqm respectively.
According to the company in one of its e-sale’s fliers, this was in response to the space of infrastructure rolled out within the Lekki FTZ and pace of development in the city.

The upward review of prices of plots of land affects residential plots while commercial and industrial plots remain at previous pricings.

Also, consensus survey carried out  on rental and sales’ values  of residential and commercial properties by members of Lagos’ branch of the Nigerian Institution of Estate Surveyors and Valuers (NIESV) in 2020, showed that land  and house prices in Lekki Phase 1, Ikate, Osapa, Agungi & Chevron, Ajah, Sangotedo, Awoyaya  and Lakowe  on the Lekki–Epe corridor have kept increasing in values  as they welcomed more development.

In a separate interview with Nigerian Tribune in Lagos, Lecturers in the Department of Estate Management Science , University of Lagos Professor Timothy Nubi; his counterpart in the Department of Urban and Regional Planning,  Professor Leke Oduwaye; Lagos-based estate Surveyors and Valuers, Mr. Richard Olodu; Mr. Dotun Bamgbola; and Executive Secretary, Association of Housing Corporation of Nigeria (AHCN), Mr.Toye Eniola, gave  reasons for the attractiveness of real estate sector to investors, a situation that has resulted to the  rise in land’s prices/values in Lekki-Epe corridor.

According to Professor Nubi, rise in price of land in Lekki-Epe axis was inevitable.

He pointed out that land values/ prices in LFTZ would continue to increase due to what he called, ‘envisaged’ population and massive investments in the area.

“When you look at the magnitude of the refinery and the Free Trade Zone, you expect that a lot of population would move to the location.

“The values of land will increase not only in Lekki but as far as Epe and Ijebu Ode. “There’s is a massive infrastructure and there is a massive project. That is one of the biggest projects going on in the world today.

“There are other developments coming up along the FTZ and there is a lot of people that are going to live there in the nearest future.

“So when there’s envisaged influx of population to a particular area, there will be speculative purchase, certain people begin to circulate and buy. So there will be a lot of high prices,” the professor of estate management said.

For these reasons, he said one should not compare property market of LFTZ to other parts of the country, where such rich influx of population is not envisaged.

He noted that land’s values have also being increasing in.Mowe corridor and other locations but not at the pace of Lekki -Epe axis.

Justifying reasons for the increasing land’s values in Lekki-Epe corridor, Professor Oduwaye, stated that land in that axis came relatively with layout by families and developers.

He said that there would be high demand for land leading to huge prices due to positive effects of physical developments at the Lekki Free Trade zone.

“The name Lekki in the recent past connotes good residential areas.” he said.

In trying to do comparison between Lekki and Badagry areas, Oduwaye pointed out that access into the latter had been difficult due to bad road.

“Most lands in Badagry area are under government’s acquisition. So it is difficult to obtain Certificate of Occupancy (C-of-O) and planning approval; so illegal structures are many and thus lead to environmental degradation and low land’s values,” Oduwaye said.

Immediate Past Chairman, Lagos branch of the Nigerian Institution of Estate Surveyors and Valuers,Mr. Dotun Bamgbola, explained that increasing housing and commercial retail real estate’s prices in recent times were due to population growth, inflation, and the need for trade, sometimes as a second business.

In addition, he said that the exchange rate of the Naira to major global currencies also played a major role as property owner benchmarked their returns with the Dollar and Euros in particular.

“There is also the investment of Nigerians in the diaspora in Lagos.”These are keys factors for increase in land and property values Q4 2021 till now,” he said.

Bamgbola advised would-be investors to buy property now so that they would be able to own one at a reachable price.

“You may not get your property of choice at a lower value in the market than now. As the Naira depreciates against major global currencies and inflation is not reversed quickly, property prices will remain on the upward swing.” he said.

He explained that despite the scarcity of money in the country, some Nigerians still get money while some diaspora Nigerians repatriated money to Nigeria for investment including real estate.

”In 2021, the amount of money repatriated by Nigerians was greater than the revenue from oil. Since property is a basic need, people will be keen in investing in it except in the period of war,” he said.

Besides, he noted a lot of corrupt Nigerians have found property investment as an easy haven.

Olodu pointed out that property investment wasn’t volatile as other non-land-based investment, saying that people found it easier to manage, hence rise in the prices of land.

“Property investment has been appreciating in Nigeria and people see Lekki to be nearness to commercial zones and public infrastructure provision.

“Property investment is a branch of economics. It increases as population increases. The population of youths in Nigeria is still increasing and naturally, these youths and other non-served Nigerians will aspire to get his or her own piece of the world.”

“Property investment is in the same category as precious stones like gold and diamond. It is the simplest investment to forecast and speculate in.

Olodu warned that Nigerians should not be concerned with the appreciation alone, but the rate of appreciation compared  with other markets.

According to him, property investment in Nigeria’s  property markets as a whole  has not been competing favourably with other property markets like Cape Town, Tunisia, Casablanca, Accra and Cape Verde (Praia).

Executive Secretary of AHCN, Mr Toye Eniola, described land as a fixed asset that its measure of value doesn’t decrease but appreciate in value.

According to him, because land is becoming limited, it’s becoming more competitive to get aside the fact that Lekki-Epe axis has become a choice area.

“Moreover, the axis is a new developing economic and industrial hub of the nation and with the like of Dangote refinery coming on the stream shortly and the proposed international airport along that corridor, the value of land will naturally jump up astronomically, “he said.

He enjoined any smart investor to key in now and reap the benefits tomorrow, saying  the entire axis would soon experience sudden development and that vacant land would soon become so scarce. This development, he said would further trigger skyrocketing  land values in the axis.