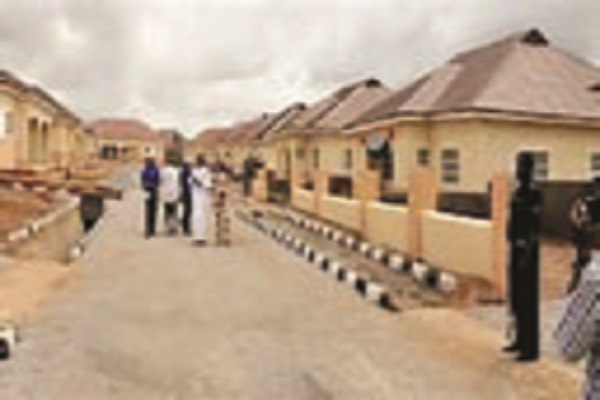 The move to establish a regulatory body to oversee the affairs of such a critical segment as real estate should receive the approval of the operators to justify its existence.

The raging controversy and steep opposition to the establishment of a regulatory body for the real estate industry is not so much about the necessity, or otherwise, for a regulator, as the composition of the entity to administer it and the assigned roles of operators and professional bodies.

No doubt, there’s a point of convergence as to the need to have a regulatory entity to oversee and regulate activities in the sector.

Many professional bodies, including doctors, accountants, engineers and the media, have consented to having their associations regulated in-country, others with overseas affiliations, have bound themselves to conforming with such external rules and regulations – the aim being the need to ensure compliance with specific industry guiding rules, as well as the need to check and eliminate quackery.There’s hardly an association, or body worth its name that detests regulation and, or oversight by professionals over its assigned roles, or practise, as the case may be.

Here in Nigeria, we have a motley of regulatory bodies that have stood the test of time and have been able to demonstrate in many ways than one, that regulation of professional bodies and associations is the way to go to ensure that their members offer the services they were trained for and upon which they have entered into contractual obligations with clients and consumers of their products, or services. Examples abound.

In the insurance industry, for example, the National Insurance Commission (NAICOM) holds sway. The Institute of Chartered Accountants of Nigeria (ICAN) stands ready all the time to sanction and defend its members in matters arising from complaints or accusations of misconduct  from the public, or specific cases of infractions reported by clients.The Nigerian Society of Engineers (NSE) has held itself bound to COREN’s oversight, so is CIBN when it comes to matters originating from the banking and financial services sector.The list goes is endless.

Some associations and bodies that are registered locally have offered and consented to global industry regulations, especially when they seek to become global players in their fields. It’s the way professionals go to validate their competency in the various engagements and assignments they engage in. Drawing up rules and regulatory norms guiding professional bodies is painstaking and time tested. It involves a lot of consultation and fair play.

For those who have gone through it, the process evolves from strategic engagement of the dramatis personae, with governments’ input, to ensure that there’s no self-serving interest. It’s essentially an interplay between the professional and the relevant governments agencies. That way, the objectives and set goals of the professional groups are accomplished and growth of the entity is guaranteed.

Cases abound nonetheless resulting in skirmishes where regulators, in certain cases, are equally bestowed with playing the dual role of operators.

Conflict of interest is usually the fall out in such arrangement. ICAN and Association of National Accountants of Nigeria (ANAN) are cases in point. NIPOST is another.

The conflicting role of the Nigerian Postal Service and its regulatory function in the courier/delivery business sub-sector, readily comes to mind. It’s an ensuing daggers’ drawn battle that is festering between the government’s owned postal agency and the private sector courier and logistics firms over NIPOST’s rate fixing and its overbearing regulatory role.

The private courier operators have never stopped to accuse NIPOST of unfair and arbitrary ‘business-hindering’ tactics in its dealings with them. It’s simple logic that you can’t make a competitor a regulator of its members.

In the case of REDAN and the evolving controversy with real estate sector practitioners, over the build industry’s regulatory framework, the lessons of NIPOST and its affiliates should readily come into play and offer a ready guide as to the resolution of the feud, alongside the ongoing legislative agenda in the National Assembly.

A bill introduced by Senator Aliyu Wammako of Sokota State to create a regulatory organ for the real estate sector has run into a gridlock over the promotion of the Real Estate Development Association of Nigeria (REDAN), over and above other operators and interest groups. REDAN, other estate agents have alleged, is favoured and surreptitiously being elevated to becoming a quasi-regulator, as the proposed law has clearly ceded the implementation and administration of a substantial portion of the sector’s proposed regulatory function to the whims and caprices of REDAN.

They say REDAN, a privately registered entity, is not different from other players.They are questioning the reason such arrangement was conceived, let alone stand.

In their resolve to right this perceived wrong, the opposing group has turned their focus to the House of Representatives and its Speaker, Femi Gbajabiamila, to do the needful since the Senate has acquiesced, so they affirm, to REDAN’s position, having passed the legislation in the Upper Chamber.

Good enough, the House of Representatives has given a nod to the issues raised by the opposing camp and has commenced action, to not only oppose the bill as it is, but has also promised, through its Committee, to jettison the law and begin a fresh process for a new law over the matter.Those opposing the legislation have said their objection is not against the intent of the law per se, but in some of its provisions, especially the roles being ceded to REDAN.

By the provisions of the Bill already passed in the Senate, the proposed regulator, among others,  is empowered to renew the licences of real estate developers yearly, upon payment of the prescribed fees and fulfilment of requirements as recommended by REDAN.

It goes further to say that the Minister may remove the chairman of the council from office based on the recommendation of the Council and /or REDAN, and that 10 per cent of the yearly revenue of REDAN is to be paid to the Council’s fund. REDAN, the offending entity, is ringed round every activity of the proposed regulation and that is where the issue lies.

However, the House of Reps is not favourably disposed to adopting the Senate’s position. This is as a result of protestation from other members in the real estate business. Following their objections, the Speaker of the House initiated a move to revisit the process.

The new process is being driven by  Blessing Onuh, who chairs the Ad hoc Committee that investigated the real estate sector in Abuja. Ms Onuh, after meetings with key stakeholders, has taken the position that the bill, as couched, is selfish, insisting that it should be jettisoned. “I am not against the regulation of the industry,” Ms Onuh had said, but added that the bill needs overhauling. “We need to sanitise that sector,’’ she insisted.

Not done, she said: “Notwithstanding, this bill is not it,” pointing out that “almost all the clauses are selfish and lopsided. If you are making a bill, do something that will favour the people, all the stakeholders and all the parties involved,” the lawmaker from Benue State said in a chat with Premium Times, wondering why REDAN, as an association, will seek to push for legislation that will favour the group alone.

Ms. Onuh explained that her Committee has, to no avail, tried to change some provisions of the bill, “we even thought of expunging some clauses, but in almost all the clauses, you will see the name, REDAN. being mentioned.There are other associations there,” pointing out that you can’t just give power to one to do almost everything.

“You say you want to create a council but in all the clauses,” she queried, “you will see that you have to liaise with REDAN or have REDAN recommend. They have the power to fine and charge fees and all that, and you say it is in the interest of Nigerians. ! “We had a meeting with FCTA, including the Minister, and we all agreed it is not a fair bill,” she stated.

The opposing parties have since resorted to seeking legal redress to put paid to what is viewed as a few individuals scheming to usurp powers of others that have not been expressly ceded to them. In a communique issued at the end of a consultative meeting with Ms. Onuh as Chairman of the House Ad hoc Committee on Real Estate and the Executive Secretary, Federal Capital Development Authority (FCDA), Shehu Hadi, it was resolved  that the proposed REDAN bill is unrealistic and should be jettisoned.

The group cited over 10 clauses, which it tagged offensive, saying from the analysis of the clauses and submissions made, it is clear that the idea of passing the bill was to concentrate the regulation of real estate business as a means of production in the hands of a few individuals under the registered acronym of REDAN.

“The practical effect of the REDAN clauses,” the group argued, ”is to reduce competitors like our clients to on-lookers in the real estate business. How can the multitude of stakeholders in the estate development industry, including individuals, corporate bodies, mortgage companies, financial institutions be at the mercy of a few persons who merely incorporated a trustee years ago?” they queried, stressing that references to REDAN should be removed from the bill.