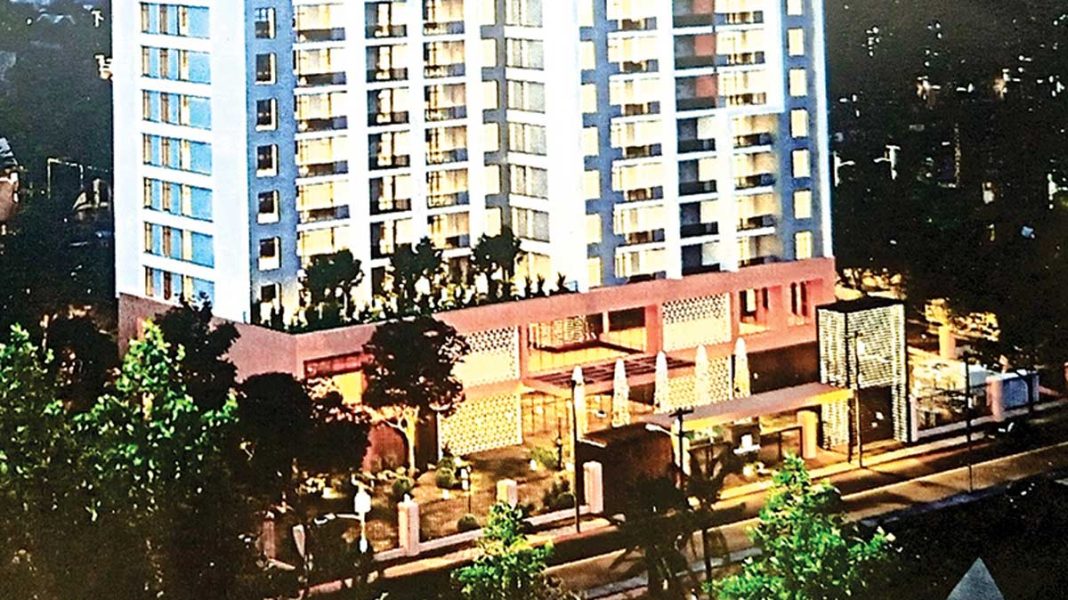 A Major stride towards stepping up Nigeria’s real estate sector and international property investment was recorded last week in Lagos, with the formal unveiling of a 21- storey luxury apartment tower in Ikoyi.

The project promoted by the China Civil Engineering Construction Corporation (CCECC) has been named Grand Panorama. The tower will be located on the most affluent street, which is Alexander Road, in an area that was formerly residences of the British colonialists.

When completed, the project is expected to feature 75 units of high-end residential apartments, 21 floors above ground level, a floor underground, 153 parking spaces, 36 sets of two bedrooms, 38 sets of three bedrooms and a set of four bedroom suites.

The tower is seated on a land area of 5, 000 square meters with the total construction area of 22, 356 square meters to house affiliated facilities like gymnasium, meeting room, swimming pool, squash court and underground garage.

The groundbreaking and foundation laying ceremony was performed by the Lagos State governor, Babajide Sanwo-Olu, who called for synergy and cooperation among Nigerians and CCECC Group in building the state, especially in the delivery of quality infrastructure.

While commending the company’s management for the decision to establish its presence in Lagos, he stated that it was a symbol of the partnership and accomplishing the Lagos dream of providing infrastructure and quality housing for Lagosians.

He said: ” When we see partners like CCECC trying to improve the housing needs of our citizens, the least we can do is to encourage them, support and believe that it would further deepen partnership between Nigeria and the Republic of China. The Grand Panorama apartments is a project that will continue to meet the needs of our citizens from the low to the high-income earners.”

He also called on CCECC to focus on low-income housing and pledged the state’s commitment to secure land for infrastructure within the mainland regions.

He said: “As you’re doing this at the high end area, we will also secure land for you, so that you can meet other spectrums of needs for medium and low-income earners. It is not only Ikoyi people you should be building for, but for people in Alimosho, Agege, Ikorodu and all other places. We know that the population of Lagos is growing and we can’t provide all facilities alone as a government, we need to partner with China and rely on your technology.”

Speaking at the event, Maoming congratulated the construction company for the milestone, adding that the Chinese government is ready to include Nigeria in its $10 billion credit facility.

He said: “Lagos State is not only your home but the homes of the local Chinese community in Nigeria. I congratulate CCECC for planning to build these apartments.”

“At the eighth Forum on China-Africa Cooperation (FOCAC) ministerial meeting that took place in Dakar, Senegal, I said that in the next three years, Chinese companies will be making an investment of $10 billion in Africa. China will provide credit facilities to every financial institution in the next three years. China is ready to channel its resources to African countries and Nigeria.”

On his part, Zhong said the company would focus on quality in its real estate business and also deliver houses that meet various needs of the people.

“We have provisions to employ the Lagos workers during construction activities. The skilled foreman and project manager will be Chinese to guarantee quality, but all other workers and technicians will be locals in Lagos.”