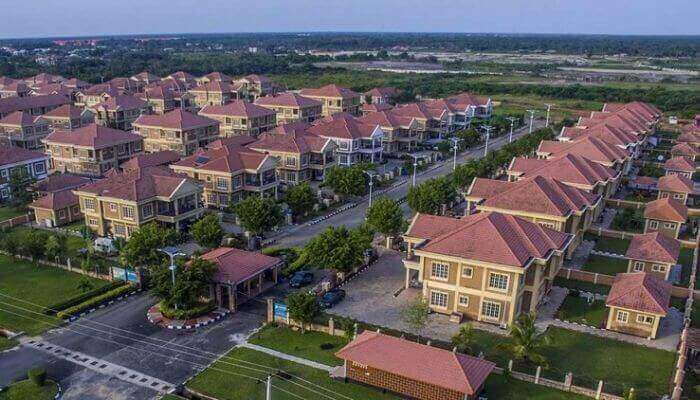 Once again, the real estate sector of the economy has shown resilience, posting 2.26 percent growth in the last quarter of 2021 as captured in the GDP growth report recently released by the Nigerian Bureau of Statistics (NBS).

The figure, which is 0.3 percent lower than what the sector recorded in the third quarter of the same year, has not only raised investors’ hope and deepened their confidence in the sector, but also brightened sectors’ outlook for 2022.

Though the performance of GDP, which grew by 3.98 percent in Q4 2021, does not capture the extent of real estate investments in any given year or quarter, it is worth noting that notwithstanding the low consumer purchasing power, investors were bullish, leading to the growth in the sector.

Dolapo Omidire, CEO, Estate Intel, had in survey of the Lagos real estate market by his firm, noted that real estate projects under construction in the sprawling commercial city increased by 19 percent in 2021, meaning that investment committed a lot of funds into the sector.

The sector came back forcefully to positive growth trajectory in 2021 after about 12 straight quarters of recession and negative growth. It recorded 3.83 percent growth in the second quarter of that year which was, arguably, its strongest in four years.

“A total GDP growth of 3.4 percent in 2021 ahead of population growth of 3.0 percent, suggests improved consumer spending. Going into 2022, we believe the narrative on real estate investments will not be far from what was witnessed in 2021 as part of the increased projects under construction in 2021 will be completed in 2022, ultimately expanding real estate consumption, Omidire noted.

Earlier in the year, experts had expressed hope in the sector, predicting a very bright and positive outlook for 2022. Many reasons have been adduced for this optimism one of which is 2022 being a pre-election year that is, historically, characterized by completion of abandoned projects and investments in new ones to appease the electorate.

The expected Central Bank of Nigeria (CBN) intervention in the housing sector, enabling environment and deployment of technology, have also been presented as possible reasons the sector will, in 2022, surpass the performance of the previous year.

Frank Okosun, senior partner/CEO, Knight Frank Nigeria, told this reporter in an interview, that within the first quarter of 2022, the sector would grow by 1.5 percent, hoping that by the third quarter, it would have surpassed last year’s growth record.

“This is just January and we are seeing activities on top gear. Transactions running into billions of naira are being closed. We have it on good authority that some foreign investors are on their way to Nigeria invest in the sector and also in the healthcare sector, and they are coming with billions of dollars,” Okosun revealed.

Femi Oyedele, an estate surveyor and valuer who was a guest at a Real Estate Outlook 2022 event hosted by Housing Development Advocacy Network (HDAN) in Abuja, predicted that the sector would witness a growth rate of 2.9 per cent in 2022.

He pointed out that in 2022, people expect that things would look up and that politicians would be able to find solutions to the insecurity challenges in the country, especially ahead of the 2023 general elections.

“I am optimistic that 2022 would be much peaceful and with that, Diaspora Nigerians and foreign investors would be attracted to the real estate sector,” Oyedele said, adding, “Lagos State government is doing much in the sector while the Federal Capital Territory (FCT) is also talking about land swap; if this is properly executed, it will have great impact on the sector in year 2022.”

At another 2022 Real Estate Market Outlook event hosted by Northcourt Real Estate in Lagos, experts were also optimistic, noting that the disruptive role of technology and population movements, especially among the millennials, would be among the four major factors to drive demand for real estate assets in 2022.

The other two factors that would also drive demand in the new year, according to the experts, included deficit in quality real estate and demand for yield by investors in this largely preferred asset class.

“These four D’s represent the opportunities we see in real estate business going into the new year,” explained Funke Okubadejo, director real estate, at Actis – an institutional investor with interest in diverse sectors of the economy.

Okubadejo noted that, at the moment, investors were looking for where to invest productively in order to get good yield, adding that yield-hungry investors no longer worry about risks as much as they do with yield.

Yomi Olugbenro, tax leader at Deloitte, noted that, though the growth in the sector slowed to 2.23 percent in Q3 2021, it was still higher than the growth recorded in the third quarter of 2020 by 15.72 percent.

He assured that with the positive movements in the sector in 2021, it has a bright outlook that would translate into growth and opportunities in 2022.