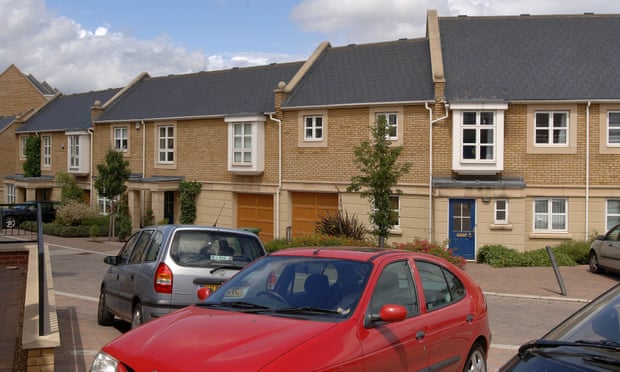 Research finds sites too often far from amenities, without public transport, cycling links or even pavements

The group Transport for New Homes (TfNH) visited 20 new housing developments in England, finding that while those on urban brownfield sites generally lived up to sustainable transport pledges, greenfield sites were often far from shops and amenities, without public transport, cycling links or even pavements, and the homes themselves were seemingly designed around car parking.

Surface transport is responsible for 22% of the UK’s greenhouse gas emissions, and the Climate Change Committee says reducing demand for car travel is key to meeting emission reduction targets. Campaigners say housing pledges in the “levelling up” white paper, launched last week, will do little to achieve this and that planning reform is urgently needed. The government aims to build 300,000 new homes a year to meet growing demand.

The report, Building Car Dependency, which follows research from 2018, says greenfield housing “has become even more car-based” in recent years, adding hundreds of thousands of additional car journeys to our roads.

“The impact of that is that houses are being designed around two and three parking spaces with tiny back gardens, no front gardens whatsoever, and that poor design obviously crowds out walking, cycling, and basically good homes.”

The report did identify a few cases of greenfield developments with sustainable transport links, such as Hampton Park in Peterborough, Poundbury in Dorset and Derwenthorpe in York, but otherwise found “the internal road layout, the car access on to major roads with bigger junctions to take the traffic, the sheer quantity of residential car parking, all told the story”.

During the pandemic, residents of such estates reported being unable to walk anywhere because the surrounding roads lacked footpaths.

While car access was built first, TfNH say walkable elements such as a high street, a children’s centre or community facilities arrived after driving habits were formed. At Chapelford Urban Village, on a former RAF site north-west of Warrington, a new railway station finally opened in 2019, 15 years after the first homes were sold.

“Quick wins” such as footpaths to nearby shops or park-and-rides failed to link up or led nowhere. In one case, shops adjacent to a retirement home were rendered inaccessible to less mobile residents by an ankle-high fence. Some front doors opened directly on to car parking spaces. In Cranbrook New Town, near Exeter, a road was too narrow for buses to reach a new bus stop.

Exceptions were at brownfield sites like Bath Riverside and Trumpington Meadows in Cambridge, the former where “the public realm is shaped around walking” with car parking “limited and mostly out of sight”.

Steve Gooding, chair of the steering group for Transport for New Homes, told the Guardian: “There’s no evidence coming through in the report that at scale we’re managing to deploy new housing in a way that really promotes the government’s parallel objectives of promoting active travel, public transport and alternatives to the private car. And unless we do that, then it shouldn’t surprise any of us that the car is going to be the default choice for the vast majority of trips that people make.”

Among the report’s recommendations are that new housing is “recast around sustainable travel”, with compact, mixed-use developments such as European-style apartments above business premises. In addition, less parking per home would reduce sprawl and make use for pavements, green space and a network of Dutch-style cycle routes. Authors also want devolved powers for things like local rail and bus rapid transit systems, with funding diverted from road-building to provide walking and cycling links.

Chambers added: “We’ve found everything from developers planning applications, through to the local plans of local authorities, right up to the National Planning Policy Framework have incredibly warm words about walking, cycling, public transport, and ‘creating vibrant walkable places’, and what we have shown through our visits and our documentary evidence, hundreds of photographs, it simply isn’t being delivered.

“There’s no reason to believe that what’s presented in the levelling up white paper – which make no changes to the planning system, and crucially includes no new funding whatsoever – will have different outcomes.”

Rosie Pearson, chair of the Community Planning Alliance, said: “Developers are building in the wrong place, with the wrong design and the wrong layout. This locks in car dependency from the outset, leading to persistent traffic jams, dangerous conditions for pedestrians and cyclists, and air pollution. It’s time for change.”

A spokesperson for the Department for Levelling Up, Housing and Communities said: “We welcome this report and agree that new development should be less dependent on cars. By 2030, we want half of all journeys in towns and cities to be walked or cycled and are investing £3bn into bus services.

“National Planning Policy is clear that significant development should give priority to pedestrians, cyclists and public transport, and we will be updating guidance later this year to promote street design that favours walkways and cycle paths over motor traffic.”

In these perilous times, a truth-seeking global news organization like the Guardian is essential. We have no shareholders or billionaire owner, meaning our journalism is free from commercial and political influence – this makes us different. When it’s never been more important, our independence allows us to fearlessly investigate, challenge and expose those in power. Support the Guardian from as little as $1 – it only takes a minute. If you can, please consider supporting us with a regular amount each month. Thank you.