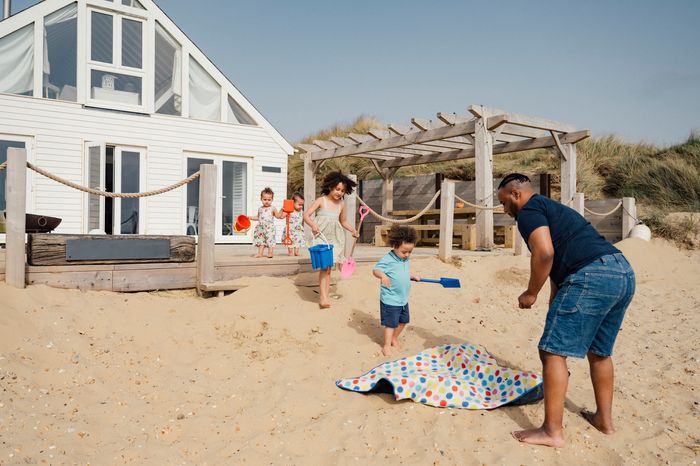 It’s been a wild ride for home buyers and aspiring home buyers over the past year, with bidding wars and rising prices — as interest rates held near historic lows (see the lowest rates you might qualify for here). Here’s what five economists and real estate pros told us they thought would happen in 2022.

“Mortgage rates snapped upward in January as mortgage investors realized what the Fed intends to do, which is raise interest rates aggressively this year,” says Holden Lewis, home and mortgage expert at NerdWallet. “Now, mortgage rates are rising more gradually as markets wait for the Fed to clarify their timetable.”

“For perspective, the 30-year mortgage averaged 4.09% in the 2010s and 12.71% in the 1980s, people bought plenty of houses in both eras,” says Lewis. This month, Bank rate’s chief financial analyst Greg McBride says he expects 30-year fixed rate mortgages to average between 3.65% and 3.85%, with the 15-year fixed ranging between 2.8% and 3%. “The bulk of these rate increase moves were made in January as markets reset their expectations on the Federal Reserve. Moves in the next few weeks, however, should be more subdued,” says McBride.

But with rates rising for the past few months, reaching their highest levels since March 2020, Gregory Heym, chief economist at Brown Harris Stevens, says they are likely to continue to rise as the Federal Reserve tapers its bond purchases, which will lead to a rate hike most likely in March. Of course, mortgages go up and down week to week, but Lewis says: “Expect more up weeks than down weeks in 2022.”  (See the lowest rates you might qualify for here.)

Even though the Fed doesn’t directly control mortgage rates, the overall tightening policy of stopping the purchase of mortgage-backed securities and raising of the short-term Fed funds rate will push mortgage rates up. In fact, Lawrence Yun, chief economist at the National Association of Realtors, says: “The average rate on a 30-year fixed rate mortgage is likely to reach 3.8% by the fourth quarter.”

Heym says the market is suffering from record-low inventory levels, which has driven prices to new highs even as the number of sales has declined. “I don’t expect this to change in the next few months as home builders can’t build houses fast enough to help the supply issue,” says Heym. Specifically, Yun says home prices are solidly higher by double-digit percentages compared to one ago. “However, with mortgage rates moving up and some home buyers getting priced out, home price growth will return to normalcy, to around 5% for all of 2022,” says Yun.

The clock is also ticking as 2021 interest rate locks with 60-90 day expirations are set to mature any day. But what does this mean for buyers? Essentially, they’re rushing and overbidding on properties in the hopes of securing a low interest rate before the next Fed increase. “This is causing bidding war frenzies,” says Pierre Debbas, managing partner of real estate law firm Romer Debbas LLP.

Prediction 4: It will still be a tough market for buyers though

Buyers will continue to have limited options in most areas as inventory will remain scarce, pros say. “Prices will continue to rise, which combined with higher mortgage rates, will drive some buyers out of the market,” says Heym. That said, it will continue to be a strong seller’s market, which means if you’ve been thinking about listing your home — there’s no time like the present.

While power will remain firmly in the hands of sellers this year, according to Nicole Bachaud, a Zillow economist, prices will rise substantially. “We’re seeing monthly growth accelerate earlier in the year than normal, but we don’t expect they’ll rise quite as much as they did in 2021,” says Bachaud. According to data from Zillow, home values in 2021 ended up 19.6% for the year and the forecast calls for 16.4% growth in 2022.

Prediction 5: But there are still wildcards

The big wildcard is the permanency of work-from-home policies or even hybrid models of employment. “That will lead to changes in residential locational choices with more households willing to buy a home farther away from job locations and home price growth therefore will be stronger in small towns and exurbs compared to downtown locations,” says Yun.

With the spring home shopping season right around the corner, expect activity to heat up. “It’s likely inventory and sales will pick up over the next few months,” says Bachaud.