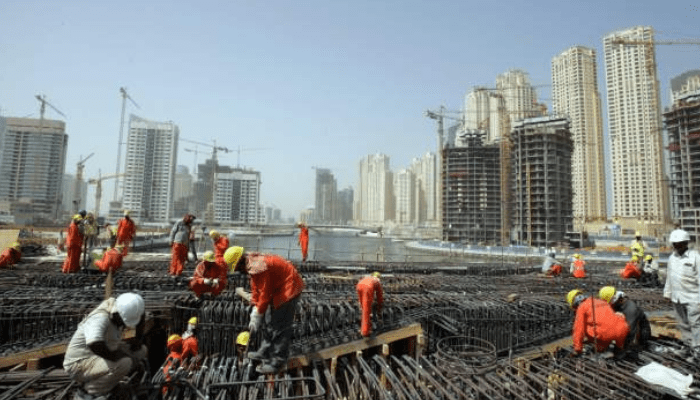 The Nigerian construction industry is projected to grow 3.07 percent this year, riding on the back of massive infrastructure spending by both federal and state governments as election approaches.

Bismarck Rewane, CEO, Financial Derivatives Company (FDC), who made this projection in his monthly economic and breakfast briefing at the Lagos Business School recently, noted that some federal roads would be concessioned and tolled.

Massive infrastructure spending by governments is quite understandable when viewed through the prism of the Federal Government’s 2022 budgetary allocation and the fact that this is an election year when governments spend to get money for election and also to entice the electorate.

“In Nigeria, politicians usually play a fast one on the electorate. They will deliberately delay spending on critical infrastructure until elections are close so as to give the impression that their government is working for the welfare of the people,” according to Henry Emeh, a public affairs commentator.

A lion share of the 2022 budget was given to four critical sectors of which infrastructure is one. The others are defence and security, education and health.

Rewane listed industry giant Julius Berger, cement and building materials companies, and all quoted cement companies as major beneficiaries of the government activities, noting that they are already “well-positioned to take advantage of the opportunities.”

While infrastructure was allocated N1.45 trillion, representing 8.9 percent of the N16.39 trillion budget; defence and security got N2.41 trillion, 15 percent of the budget; education got N1.29 trillion,7.9 percent; health N820 billion, 5 percent, while social development and poverty eradication was given N863 billion, which is 5.3 percent of the entire allocation.

“If budget discipline is anything to go by and the government chooses to be disciplined in implementing the 2022 budget, the impact will be much. Apart from improving the state of the roads, it will lead to an upward review of property prices which will, in turn, encourage more investment,” noted Olisa Ebigwei, CEO, Soe Properties, a Lagos-based real estate investment company.

There is a significant difference between last year’s budgetary allocation and that of this year, looking at the capital expenditure for both years. In the 2021 budget, the allocation was $4.37 trillion, or 32.2 percent of the overall budget. This was meant to advance progress on transportation, power and energy, housing, and agricultural projects in all six geopolitical zones.

The Lagos-Ibadan railway project was also inaugurated and the central government has allocated $280 million to the $1.2 billion Kaduna-Kano rail project. In total, the Lagos-Ibadan Expressway, 2nd Niger Bridge, and Abuja-Kaduna-Zaria-Kano highway have all received $1 billion.

Rewane also sees a bright outlook for real estate, saying the global value of this sector is expected to grow to $85.1 trillion in 2025 from $34 trillion in 2021.

According to Rewane, core cities such as Lagos is to drive the Nigerian investment landscape, noting that the need for security is fuelling demand for gated communities and Abuja residential assets.

Prices and sales value in leading cities for land and residential apartments have risen while the retail market is experiencing market corrections due to climbing demand from local investors, he further noted.

“Spending on real estate assets is expected to rise in the pre-election year,” he said, quoting Housing Development Advocacy Network (HDAN) as saying that the real estate sector would grow by 2.9 percent despite a rise in the cost of building materials and a harsh economy.

The growth projection was also based on the sector’s 10 percent expansion in Q3 ‘2021, the Central Bank of Nigeria’s (CBN) real estate programme, and the Federal Government’s land swap initiative.

He also sees increased demand for warehouses and distribution centers as a result of migration to e-commerce and remote working, noting, “There will be increased commercial real estate capital allocation in industrial property.”