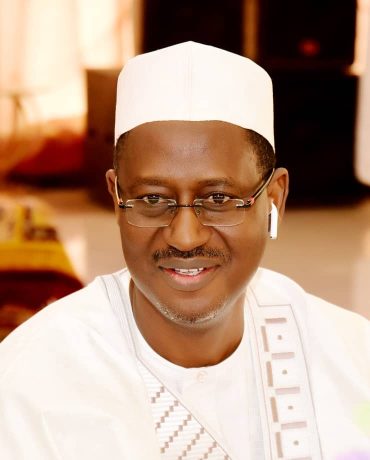 Salamatu Ahmed is a level 9 administrative officer with the Citizenship and Leadership Training Center in Abuja. Shortly after she gained employment, she registered and consistently contributed to the National Housing Fund (NHF) Scheme. The NHF is a federal government program created in 1991 to pool long-term housing finance to drive the delivery of affordable housing to Nigerians through the Federal Mortgage Bank of Nigeria (FMBN).

About a year ago, Salamatu received the keys to a three-bedroom, fully detached bungalow at the 230-housing unit Woodhill Estate located in Kuje, Abuja, FCT, after a down payment of N3.5M.

“Am so excited,” an elated Salamatu exclaimed. “It is a dream come true for me. I am now a landlady in Abuja, the Federal Capital Territory (FCT). Now I don’t have a problem with neighbors, landlords. I control my living space, and no one can come and knock on my door, saying your house rent is due. Even when my husband is away, he knows we are safe and comfortable in our house. ”

“The first step I took was to register and start contributing to the National Housing Fund (NHF) Scheme. Next, I joined a Cooperative Society. I paid N3.5m equity, and FMBN paid the remaining balance. They would be deducting it from my salary till I retire, and it won’t affect me,” she added excitedly.

Another beneficiary of the FMBN funded Woodhill Estate in Kuje is Mariam Amos, a level 10 Civil Servant with the Federal Government. She is a proud owner of a three-Bedroom Bungalow.

“Before I got this place, we were paying rent where we lived in Lugbe, and I’ve been there for about 3-5 years, and you know everyone wants the security of owning their home because before you know it, a year has gone by, and you’re thinking of paying another rent, so it wasn’t easy at all”.

“Knowing we don’t have the finance to buy the property, my husband suggested that we get a loan from the Federal Mortgage Bank, so we paid the equity, and we were able to source the loan from the FMBN. We were surprised when they called us to go fill in the necessary documents”.

“I can now call myself a landlady now in Abuja, as I don’t have to pay rent to anyone again,” an elated Mariam Amos said.

On the one hand, they include the financing construction of affordable housing stock by reputable housing developers and the packaging of affordable mortgage loans to enable eligible NHF off-takers to own the built properties.

In their case and that of other beneficiaries of the Wood Hill Estate, the Federal Mortgage Bank of Nigeria (FMBN) provided a N997M Cooperative Housing Development Loan to the Akacare Multipurpose Cooperative Society. The Cooperative comprises workers from the formal and informal sectors, including civil servants, private-sector workers, and self-employed persons. The approved housing units were deliberately designed to fit the incomes of the Akacare Cooperative members to ensure affordability. They comprise two (2) and three (3) bedroom detached bungalows priced at N7.5M and N9.5M, respectively.

Quality assurance was also a key deliverable at the project site. Unlike the practice in the past, the FMBN did not only vet and disburse the monies to the Developer. They also deployed competent built professionals its employment to closely monitor each stage of the construction process to ensure strict compliance with agreed building standards and specifications. FMBN split the disbursements into phases to ensure value for money with additional payments tied to the developer meeting set deliverables and project implementation timelines after inspection and confirmation by its professionals.

Upon complete construction, FMBN proceeded to package NHF Mortgage loans of up to N9M to members of the Akacare Cooperative Society to enable them to own the homes at the best market rates. The interest rate on the FMBN NHF mortgage loan is seven (7) percent, and tenors are upwards of thirty (30) years, depending on the beneficiary’s age and length of service.

The wholly subscribed Wood Hill estate is fully serviced with basic infrastructure, including an internal road network, electricity, and waterworks to create residents’ conducive and livable environment. FMBN also provided additional finance for the construction of a 2-kilometer access road for the estate.

The Woodhill Estate is one of the many estates that the FMBN has financed to make affordable homes possible for members of cooperative societies nationwide.

The FMBN Cooperative Housing Development Loan (CHDL) enables a cooperative society with unencumbered land titles to access construction finance and build houses for its members who must contribute to the National Housing Fund (NHF) Scheme.  The loan window provides up to N500million at an interest rate of ten percent. Key features include tenors of up to 24 months with a moratorium of 12months. Once built, FMBN packages mortgage loans to enable the members to own the houses.

The Hon. Minister of Works & Housing, H.E. Babatunde Raji Fashola, SAN, commissioned the estate in 2020. At the same event, the Minister kicked off the National Cooperative Housing Development Scheme to boost the delivery of affordable housing to Nigerian workers in a structured manner.

Next, the FMBN will provide mortgage loans of up to N15million to the members of the co-operatives at a nine percent interest rate per annum with tenors of up to 30 years depending on the contributors’ age through primary mortgage institutions.

At the commissioning, Fashola commended the Board and Management of FMBN for the push to deliver affordable housing to Nigerians using Cooperative Societies and the collaboration with built industry professionals to deliver on quality.

“This string of partnerships, including subscribers who want a house, who are ready to pay for it, who can afford it; the developer who is committed to delivering it, an architect who can meet the needs of the subscribers, and most importantly a bank that can translate their dreams and vision into an actual homestead, where people can say I have shelter, is important and we want to do more of it.” Babatunde Fashola said.

The Minister decried the prevalence of empty houses in Nigerian cities. He said that they speak eloquently about the problem that FMBN in collaboration with the Developer, has solved for members of Akacare Cooperative Society.

“You will hear those 150 houses are already fully subscribed.  That means they are affordable. You will hear that 77 units are ready, which means there is a waiting list of ready off takers as distinct from an empty house that nobody can afford. Therefore, co-operatives have become a critical tool to address this problem.”

Under the National Housing Cooperative Development Scheme (NHDS) framework, the Minister stated that the government expects Nigerian workers to organize themselves into co-operatives to ensure financial visibility. They are to acquire their land, design the types of houses they plan to build, get proper titles for the land and a planning permit, after which they can approach FMBN for a loan.

Patrick Ekpe is the President of the Akacare Cooperative Society and a proud owner of a 3-bedroom fully detached bungalow in the estate.

“The constant increase in the cost of renting in the FCT pushed us to form the Akacare Cooperative and work towards owning our homes. Our members are civil servants who contribute to the National Housing Fund (NHF) Scheme. We came together with a common goal, engaged Perfect Estate Developers Limited, and later met with FMBN to develop the framework for building this estate.

The choice of design and variety of sizes was intended to cater to the co-operative’s diverse membership. We have the two-bedroom semi-detached; we have the three bedrooms, and we have duplexes as well. So, for most of our members, affordability is critical; we consider the affordability on what is your capacity to take on what you want to do”.

“Over the 20-years that I started working and contributing to the NHF Scheme, I never knew it would be possible to use that to own a home of my own. I have missed many opportunities to acquire a house because of the many challenges that we face. Because we formed a Co-operative, we have been able to get to where we are today. I feel lucky as a happy owner of a 3-bedroom detached bungalow. That’s why I say a big thank you to federal mortgage bank”.

AkaCare Co-operative society is one of many co-operatives in the country that is benefiting from the resolve of the FMBN to boost homeownership for Nigerians. The Bank has about forty (40) cooperative housing development loan projects that are ongoing nationwide with a projected delivery of about 2,570 housing units.   The Akacare illustration and the forty projects spread across the six geopolitical zones should encourage other co-operatives to take advantage of the favorable government posture and the institutional framework provided by the FMBN to put smiles on the faces of their members.

For a long time, co-operatives have been proven as functional frameworks for empowering those who fall within the low-medium income bracket. And it’s a good thing that FMBN is championing its use in delivering affordable housing to Nigerian workers.

From the onset of industrialization, housing cooperatives served as a solution to the desperate housing conditions of Europe’s working classes.  By the early 20th Century, housing co-operatives were common throughout Europe. After World War I and World War II, they assumed a crucial role in rebuilding the damaged housing stock. Nowadays, according to the Co-operative Housing International, 27 million Europeans live in housing co-operatives.

Although the trend of a more robust private-driven housing market continues, housing co-operatives remain Sweden’s most affordable form of tenure, representing 22% of the total housing stock.