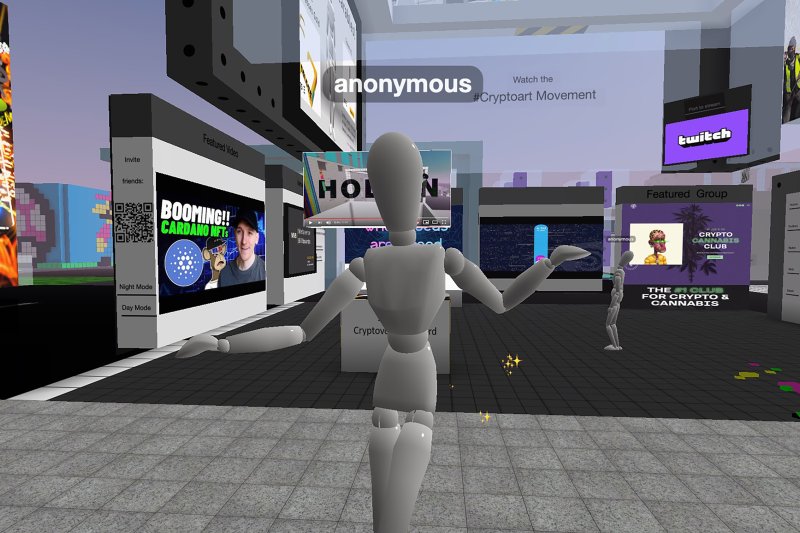 Chris Adamo considers himself late to the game when it comes to investing in NFTs, or non-fungible tokens. He collected his first one in summer 2021. But when it comes to buying up property in the metaverse, Adamo is early. Eight months ago, the Miami-based venture capitalist and a group of associates calling themselves the MetaCollective DAO used a virtual real estate broker to buy 23 parcels in The Sandbox, a user-generated, blockchain-based virtual world, for prices starting at 1ETH (about $3,000). A nearby property sold for about 42ETH, or $130,000.

The land—pixels, really—borders the compound of the Bored Ape Yacht Club, a buzzy NFT community, and a plot owned by Adidas. They’re calling it Sandbox Hill Road, as a nod to Silicon Valley’s famous Sand Hill Road and The Sandbox, the platform where this “land” exists. Already, the parcels’ value has gone up about ten times in price, making their holdings potentially worth many millions of dollars.

“It’s like the New York City of The Sandbox,” Adamo says. “Like the Lower East Side or Soho right now.” Translation: it’s hip—or at least, they are invested in believing it can be.

If the metaverse is meant to encompass everything that exists virtually, from digital art to virtual worlds, then the real estate parcels that are being snapped up can be seen as just one type of metaversal investment, often listed as NFTs. These virtual worlds—The Sandbox, Decentraland, Cryptovoxels, Earth2, Nifty Island, Superworld, Wilder World—each offer different things to users: hyper-realistic graphics, gaming options, communities of specific types of early adopters. (Snoop Dogg, for instance, staked out a home for himself in The Sandbox; Paris Hilton has an island in Roblox.)

Right now, if you open The Sandbox on a web browser, all you’ll see is a flat map of brand logos scattered throughout land-shaped masses made up of colorful pixels. (Each of those pixels, or plots, is a property worth real money; in general, the concept of scarcity is a farce online, but in these worlds—as in our physical one—it is often real.) Meanwhile over on Cryptovoxels, things feel more like an early-stage video game populated by blank walking mannequins. (Sometimes, they fly.) Click on a billboard, and you’ll see details of the NFT work and artist you’re viewing, with a link to OpenSea, the NFT marketplace.

MetaCollective has big plans for their blank squares. For Drew Austin, managing partner at venture capital syndicate RedBeard Ventures and leader for MetaCollective, it’s all about developing this corner of the future internet into a learning center or “university” for self-education on all things web3. He envisions virtual classes, dormitory rooms that users can rent, and a full social experience. “We can recreate what an educational digital experience is, in this new digital world,” he says. None of this has been built or designed yet. But the money is real.

One way to think about it is like purchasing a domain name, or snagging a good social media handle. If email was our home in Web 1, and social profiles—like a Facebook or Instagram page—were the Web 2 home bases for each of us, then personal property in the form of virtual real estate may be the Web 3 version. The difference is that instead of being beholden to providers or platforms to design, regulate and control the experience, Web 3 property is intended to be something you, the end user, can build yourself. For brands, it could mean something much more interactive and active than their current digital presences. For individuals, it could mean earning income by playing games or selling products.

Andrew Steinwold, managing partner at metaverse-native fund Sfermion, calls it “unlimited optionality,” breaking free of the bounds of our profiles and pages. An entire industry of virtual world developers has already popped up. “One of the things that’s so exciting and fascinating about the metaverse is it’s all about cocreation, right?” says Jessica Peltz Zatulove, another MetaCollective member. “So we’re also just seeing this blending between creators and celebrities and communities.” Then again, right now this is all speculation.

The big winners—at the moment, at least—are the platforms and developers, who are raking in investment dollars from early buyers. Animoca Brands, the company behind The Sandbox, recently reported it is now worth $5 billion, up from a valuation just over $2 billion in 2021. Roblox, a more established gaming universe, listed on the New York Stock Exchange in March 2021 at a valuation of $42 billion. One research report predicts virtual gaming worlds alone could be worth $400 billion by 2025, with the broader metaverse industry worth over $1 trillion.

Many of the early buyers of virtual real estate are doubly invested—in the platforms themselves and through personal plays like DAOs buying and developing new land—so their bullishness is ultimately self-serving. (Steinwold’s fund, for instance, has its hand in both platform investments and individual properties; Austin runs a fund that invests in five different worlds.) The technology, too, is early—Adamo is the first to admit we’re about a decade out from easy mass adoption, and Austin notes plenty of “room for improvement,” from the interface to the technically complicated process of buying property.

But the hunger is there for web3 investors. Virtual property prices have gone up as much as 500% since Facebook’s much-hyped transition to Meta, according to CNBC. Already, plots in some virtual worlds are just as expensive as a real-world house.

Even if the casual user experience leaves much to be desired, however, ways to claim land and plans to develop property are expanding daily. ONE Sotheby’s just announced they will build a virtual replica of a real-world property in The Sandbox, with ownership crossing over. Meanwhile, an anonymous buyer snapped up the neighboring property to Snoop Dogg for a reported $450,000, betting on proximity to a famous neighbor as a value-add, just as MetaCollective is betting on Bored Ape Yacht Club. Over at Cryptovoxels, one developer is planning to build a New York Stock Exchange-style trading center and home for crypto-native companies like defi protocols in their centrally-located Frankfurt property, a spot they purchased because it allows for larger virtual buildings. The dream is for it to become a central hub in this universe, and one with real utility as we migrate into virtual realms.

If this all sounds quixotic, that cynicism is warranted. Even investors are maintaining healthy skepticism about the current iterations of virtual worlds. Steinwold has raised over $100 million from investors for his funds, but he sees much of the virtual world speculation as being overvalued so far. In fact, he says, overvaluation in web3 is “true broadly,” from NFT art to crypto tokens. But that still hasn’t stopped him from investing “at the company-building level.” And it hasn’t stopped him from backing the Frankfurt NYSE plan in Cryptovoxels. “We’re kind of in the pre-Napster era. We don’t have Napster yet. We don’t have iTunes, and we don’t have Spotify,” he says, comparing today’s virtual worlds to the early-2000s music-sharing platform and its successors. “That’ll come, but it’s gonna take a pretty long time.”

For Zatulove, another MetaCollective investor, the draw is in the business potential. As a founding partner of Hannah Grey, an early stage venture firm that specializes in emerging platform potential for brands, Zatulove is focused on finding ways to build commerce into this new landscape. “It’s about having an office space in a prime location, but it’s really about: Can you rent this land?” she says, “Can you have a store? Can you host events? We’re in a gold rush moment with virtual real estate where people don’t know what they’re gonna build or how they’re going to build it, but they’re acquiring land in the best possible locations to create an interesting financial future.” She imagines setting up office space on the MetaCollective campus.

“Maybe we have a coffee shop, maybe we have a cool hangout. Maybe we have town hall meetings, maybe we host office hours for founders, maybe we just have a museum that inspires creativity, in collaboration across different builders in this space,” she says, brainstorming. Plus, the market is untapped; Zatulove cites the three billion people worldwide who are gamers, and who are used to spending time in virtual environments. Even if Sandbox hasn’t captured their attention yet, the potential is there. “The delight right now of virtual real estate is that it’s recognizing that there’s opportunity ahead that you’re setting up for yourself,” she says.

Adamo has kids and, like any dad, he’s thinking about their future—and about what he can pass down to them. This real estate might not be a brick-and-mortar property, but it’s still something bought with their best interests in mind. “With the rates of this year’s growth, this looks like a really multi-generational plan purchase,” he says. Maybe Sandbox Hill Road will disappear into the ether of the internet in a few years, like Limewire and Kazaa. Maybe he’s bought into a future Spotify. In the meantime, the bubble just gets bigger.