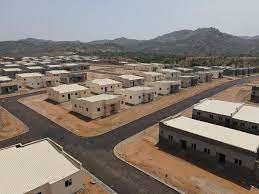 Brains and Hammers Limited announced an eight billion (N8bn) naira investment from the private capital market to power its housing projects in the country.

The N8bn SUKUK funding was made possible by a consortium of lenders in the private sector including ARM and Fidelity Bank.

Adebola Sheidu, Chairman, Brains and Hammers, expressed delight at the SUKUK investment, noting that it represents a vote of confidence in the company.

“With phase 1 of the Bungalow City project nearing completion in less than one year after construction started, the 1, 2, and 3-bedroom housing units are proof that we are not just at the forefront of providing affordable housing development in Nigeria, we are building infrastructures as well,” he said.

“The ongoing construction of a 3.8km access road and over 3km internal road network within phase 1 of the project is a pointer to that fact.

“This infrastructural development is supported with recreational facilities including schools, Banks, a business hub, and a shopping mall, accentuating Brains & Hammers’ commitment to creating a healthy Live, Work & Play environment around their mega projects across the country.”

Mr. Sheidu added that the project is also well-positioned to create over one thousand (1000) direct, indirect, and ancillary jobs during construction and upon its completion, thereby creating a large-scale economic impact beyond the provision of affordable housing & infrastructure.

Brains and Hammers’ bold move in this instance has been enhanced by the confidence reposed in the company by the consortium of investors who are also committed to reducing the housing deficit in Nigeria.