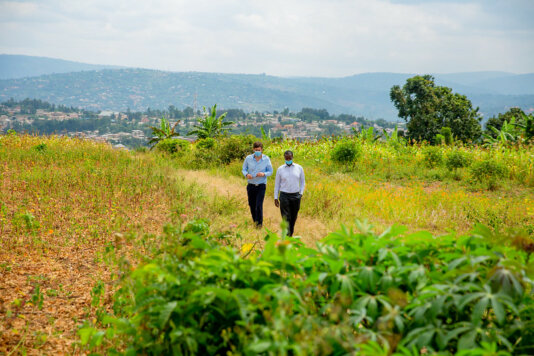 By 2060, the share of Africa’s population residing in urban areas will be 60 percent – up from 36 percent in 2010. This process of urbanization is set to put more pressure on basic infrastructure, including housing, sanitation, and healthcare among others. The situation is being exacerbated by climate change, which has occasioned flooding and dry spells in equal measure.

Alive to the complex matrix that comes with the urbanization trend in Africa, countries are embracing smart-city solutions as they seek to address growing inequalities, poverty, and environmental degradation.

Rwanda, one of the countries poised to have 35 percent of its population living in cities by 2024, has decided to tackle the situation early.

In a first-of-its-kind development, the East African landlocked nation is in the process of building the first green city on the continent through the Government’s Economic Development and Poverty Reduction Strategy (EDPRS).

A MODEL FOR AFRICA

The project, which is estimated to cost $5 billion span across 620 hectares of land, will include 30,000 housing units that will benefit an estimated 150,000 people while creating 16,000 jobs for local communities. It will be located about 16 kilometers outside the capital, Kigali.

“As a flagship green growth project, the Green City Kigali will provide green and affordable housing in the Kinyinya neighbourhood of the capital and serve as a model for sustainable urban development, connecting affordable housing with climate change adaptation and mitigation measures,” said the Ministry of Environment in a statement.

Embracing a sustainability approach, Green City Kigali will cater to both low and middle income residents and will have green buildings, renewable energy, wastewater and rainwater collection systems that will be installed in every house. It will also have a recycling plant that will ensure the treatment and reuse of effluence.

To ensure that houses are affordable to local communities and remain environmentally sustainable, the project will use local building materials.

“The green concept being championed by the Rwanda government has set a pace in sustainable management of cities in Africa at a time when rapid urbanisation has put a major strain on social amenities,” Rikki Otega, an urban planning expert, told FairPlanet. “With the population set to grow exponentially over the years, the cities can no longer hold this bulge. Governments must therefore think and act differently as they seek to manage the cities of the future.”

“But to make the sustainable cities model long lasting and inclusive,” Otega added, “governments and project implementers must actively involve the local communities so that they can own the projects; because, at the end of the day, the government will rely on communities to actualise this concept.”

The Green City project is the latest in a series of sustainable interventions that Rwanda has embraced as it looks to be a model for green economy in Africa. Its various green and clean interventions are guided by the economic blue print Vision 2020, which seeks to position the country as an environmentally sustainable middle income nation.

In 2008, the country instituted a total ban on plastic bags at a time when most of the world was still hesitant on the matter and when many nations had settled for simply imposing taxes the bags. Passengers are currently not allowed into the country with plastic bags, with the penalty for doing so being a $150 fine. Store owners found with the bags face a jail term of up to 12 months.

Umugunda, a Kinyarwanda term that loosely translates to ‘coming together for a common goal’, is a monthly exercise meant to clean the streets. Taking place every last Saturday of the month, the initiative brings together able bodied citizens in a clean-up exercise that involves cleaning the streets, unblocking sewage systems and clearing bushes. Even the president participates in the exercise.

The government has also introduced car-free zones in a move meant to decongest Kigali and create a pedestrian-friendly environment. Cars and minibuses are banned from the city center, and residents thus rely on buses, bicycles or walking for their daily commute.

These efforts have paid off. In 2008, the UN-Habitat awarded Kigali the prestigious UN-Habitat Scroll of Honour Award for its efforts in promoting an environmentally friendly city even as it industrializes.

In 2015, the international travel guide for adventurous travelers World Travel Guide had ranked Rwanda among the top-three greenest places on earth, after Costa Rica and Ecuador.