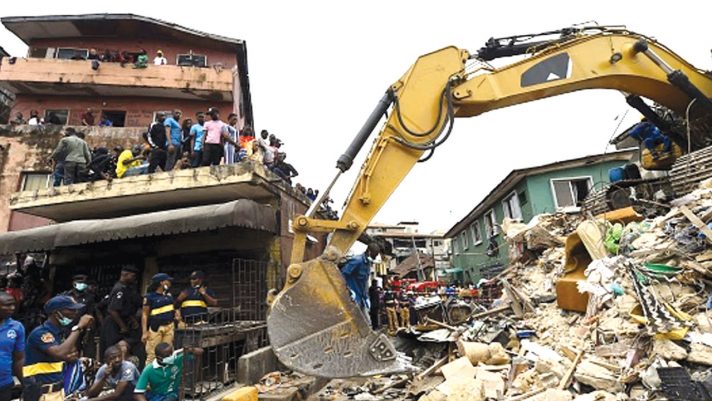 The Nigeria Institute of Building (NIOB) has tasked regulatory agencies in charge of housing on the need to ensure that building construction meets the highest standards in order to end the recent wave of building collapse across the country.

The Chairman, FCT Chapter of NIOB, Bldr Omale, who gave the charge in an interview with journalists in Abuja, decried the spate of unavoidable building collapse in Nigeria.

He also called on concerned authorities to work assiduously towards risk finding lasting solutions to the incessant cases of building collapse in the country.

Omale, who said the increasing rate of building collapse in urban and rural communities was traceable to activities quacks in the industry, advocated regular monitoring of different stages in the construction of buildings by professional bodies and government agencies.

“If we have people in the regulatory agencies that are also not doing their job, they should be called to question. It is not just about coming out to make statements, we have had so much of that,” Omole said.

“Every year we talk about building collapses, lives and properties are lost and money goes down the drain and at the end of the day the government will say they are conducting an investigation and the matter ends there.

“It is not good for us as a people and we cannot be losing innocent lives to something that is manmade. These are deliberate acts of ignorance, negligence and a function of corruption that is endemic in the system.

According to him “In the month of August alone, we have had three building collapses across the country; in Kubwa Abuja, a three storey building that was under construction, collapsed, record has it that three lives were lost there, many people were also injured and surrounding houses were also affected.

He added that “when these things happen, people come out with different verdicts and you get different accounts that are coming from a lay man’s background and not really understanding what the root cause of the problems are.

“As professionals we don’t find the issue of building collapse funny, because it is an embarrassment to our noble profession. When things like this happen, people come out to say that the builders that built the house that are collapsing… Just like what happened at Osbourne Street in Lagos where the owner of the house also died in the collapse,” Omole said.

“When the verdicts were coming out, they were accusing the builders, however, they failed to mention the specific persons who were involved and if at all they are professionals, what are their professional inclinations, are they architects, are they builders, are they engineers, are they surveyors? Some of them just found themselves there doing what they are not supposed to be doing.”