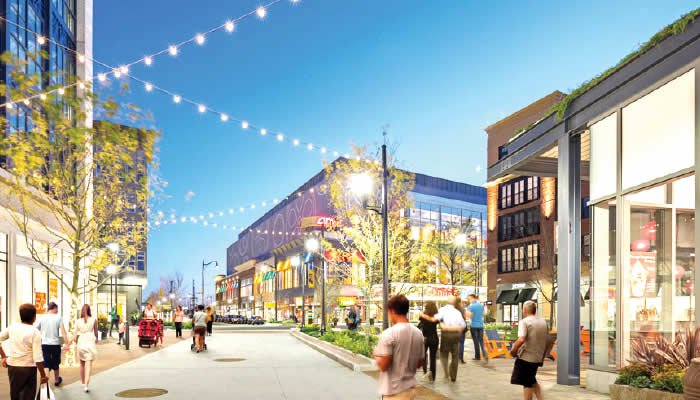 As mixed-use communities continue to gain acceptance in the real estate sector, EDIDIONG IKPOTO examines the incursion this form of property development has made into the Lagos market

The real estate industry, like several other aspects of any economy, naturally gravitates towards places of high density and human activity. Regardless of the existence of comparatively cheaper business conditions at the suburbs and areas of minimal human activity, most organisations will most likely site their base of operations at the nerve centres of the town where most consumers and productive people live.

The implication of this gravitation is the creation of healthy and unhealthy competitions between brands who will employ innovative and sometimes aggressive tactics to outdo the competition. For the real estate industry, this competition finds expression predominantly via innovation and creativity and the ability to critically evaluate the industry’s landscape and exploit existing gaps with regard to customers’ needs.

In fact, for companies that hope to edge the competition, it is not usually enough to develop to clients’ and customers’ needs. It also involves predicting trends that will break new grounds by offering home-seekers a wide array of options that goes beyond modern living.

For some, it simply means looking for ways through which home acquisition can be made easier for a wider spectrum of home-seekers, particularly given the fact that owning a piece of property is fast becoming a luxury only available to an exclusive few.

In the 90s, the idea of a Central Business District being separate from residential spaces was prevalent and homes were often in the suburbs of business centres. With a revolution in how we understand work and recreation, spaces incorporating work and leisure began to emerge.

With the outbreak of the Covid-19 pandemic in 2020 and the attendant consequences that followed the first global pandemic since the influenza outbreak of 1918, a shift in the way people lived and worked gave rise to new innovations in the real estate industry.

Companies, schools, churches and many others began to explore the possibility of having people perform certain functions from their homes in lieu of making physical appearances. This paradigm shift, for real estate practitioners, provided a platform to rescale their creativity to align with the demands of the time.

It was against this backdrop that the live, work-play developments, which is not an altogether new concept, began to gain increasing currency within the real estate ecosystem. There was a shift, and industry players had to pander to this tilt in order to keep up with the evolving rubric of modernity.

Also referred to as mixed-use developments, live-work-play communities are designed to accommodate all the needs of their residents. Historically, these typically existed only in cities where people in multifamily units would meet all their needs within walking distance.

However, live-work-play developments have made their way out of the city into suburban and rural areas. Their neighbourhoods often include spaces for businesses and shared areas for work and play, providing residents with numerous resources that can support a multifaceted lifestyle.

Live-work-play developments have become increasingly popular due to the advantages they have over the typical neighbourhood.

A closely related idea to a live-work-play community is the 15-minute city, which is the concept that cities should have car-free access to basic necessities such as healthcare, food, schools and employment within 15 minutes of where people live, either on foot or by bicycle.

Within this idea, the city is decentralised and becomes a conglomerate of villages, each with its own car-free green spaces, homes, mixed-use spaces, and flexible workplaces.

The future of how we work and how that relates to our lives is evolving rapidly, and many new concepts which could rescale real estate development are already on the horizon.

Proponents of mixed-use developments have often argued that these communities eliminate long commutes and the hassle of driving into town to run errands/work/seek entertainment. For them, less driving means more walking for a healthier lifestyle and less pollution (transportation accounts for close to 50 per cent of greenhouse gas emissions in Nigeria).

It also means more time at home with family and friends since mixed-use developments typically means remote and hybrid working which allows people to work from wherever they want.

According to them, those who choose to live in a live-work-play community could be more productive because they have no commute, more time for family, more exercise, a higher quality of life and better overall work-life balance.

Being able to live, work and have fun without leaving your building is most appealing to the largest renting generation — millennials, especially the younger half of this age-group of renters.

In the United States, apartments in live-work-play buildings are rapidly rising in popularity, quadrupling in number compared to 10 years ago, from 10,000 to 43,000 apartments per year. Manhattan, New York leads overall, with one-fifth of the total number of US apartments in mixed-use buildings, while Washington, D.C. is the leader of the last decade.

In Nigeria, mixed-use developments are more prominent in cities such as Lagos and Abuja because of the increase in investor interest over years. While speaking recently at a symposia titled, “Real estate as a tool for economic development,’ the Chief Executive Officer, Landmark Africa, Paul Onwuanibe, said mixed-use developments, by default were designed in a manner that made people more effective with work.

He said, “I’m a big believer in the mixed-use, live, work and play environment. The way we work has changed and maybe the pandemic caused it. The parameters between leisure, between work have changed.

“I want to work when I’m playing. I want to sleep when working, and I want to eat when I’m working. If you can do these things at the same time, you will do well.”

A Lagos-based ICT expert, Andy Bennet, who also shared his thoughts with The PUNCH, said work life and personal life must be separated for any worker to have a balanced life.

According to him, the traditional system of jostling through gruelling traffic conditions, particularly in a city like Lagos could afford one the opportunity to exercise and also become acquainted with the cultural nuances of the city.

Bennett said, “There is no way I would want to live where I work. There is nothing more I dislike than my work eating into my personal life, and there is no way I live where I’m working that that will not happen because I’m going to think – after all, the house is just close by.

“For every day you leave the house, if you ask me, it’s part of socialisation. You get to meet people everyday, you see how they act, how they react to things.

“For example, I know how to shout ‘mo’mgbole’ because I’m actually going to work every day, I know what ‘owa’ means. I’m picking up the language of where I am.”

The ICT expert’s perspective is anchored on the believe that work environments often produce “moods” which can only be purged by a change environment in order to reset and refocus on work again.

Asked whether the time-saving advantage of mixed-use apartments could help him work more effectively, Bennett said, “I’ll be effective when I’m able to balance my work and my social life. If I don’t balance those two, I might end up being effective, but what happens to my personal life?

“There are days whereby, at the office, I feel like breaking all the systems; days that the network wants to frustrate me and I feel like setting fire to the all the cables in the network room. If I happen to be working there, there no going out to clear my head.

“I can’t say I’m done for the day and then carry my bag and start going home. Me going home means I’m clearing my head, because once I step out of that place, I’m able to think of other things other than work. When my head is clear and I come back the next day, I’m more clear headed and I’m able to face the task.”

He said, “I used to work in Ikeja. Then, I usually spent hours in traffic to and from work. To be honest, there were some days I would get so tired by the time I got to work that I would be unable to work as effectively as I normally would.”

A Lagos-based realtor, who simply identified herself as Natasha, echoed the same sentiments. According to her, “there are benefits in mixed-use developments, for example, it reduces distances between housing and workplace.”

Another realtor, Olamide Samuel, stated that as much as mixed-use developments increased work efficiency, their downside was in the fact that they often did not help community members compartmentalise their lives.

“The benefits of live, work, play environments are obvious, but it doesn’t help if you’re someone who needs to refocus before going back to work. Take my job for instance, the nature of my life does not permit me to stay in one place.

“I move around a lot, and it helps, especially here in Lagos. In fact, how much of Lagos you know can be a job opportunity if you know how to use that opportunity.”

he Federal Reserve has hiked interest rates hard this year, and the US housing market is feeling the pain.

According to businessinsider, to fight the strongest inflation in 40-years, the Fed has raised its main interest rate by 2.25 percentage points since March — and there are likely more increases to come.

Now, house sales are tumbling and inventory is rising dramatically. Many analysts are penciling falls in US home prices over the next 12 months.

Official S&P Case-Shiller data on Monday showed that prices rose once again on average in June, although some areas saw declines. But June was three months ago.

Meanwhile, Goldman Sachs said it expects growth in home prices to grind to a halt in 2023. It said outright declines are possible, and indeed likely in some areas.

Here are three charts that show why home prices could be set to tumble in the coming months.

The main culprit behind the slowdown in the US housing market is the rapid rise in mortgage rates over the course of the year.

The average 30-year mortgage rate shot up to a 14-year high of 5.98 per cent in June, according to the Mortgage Brokers Association. It started the year at just 3.52 per cent.

US home prices jumped more than 40 per cent over the course of the pandemic. Now a dramatic rise in borrowing costs has pushed home-ownership beyond the reach of even more Americans.

With housing increasingly unaffordable, and Americans highly pessimistic about the economy, home sales have dropped off a cliff.

Sales of existing US homes — as opposed to new homes — fell for the sixth straight month in July, to a seasonally adjusted annual rate of 4.81 million.

New home sales have also dropped sharply, and the annual rate hit a six-year low of 511,000 in July.

With demand drying up, many sellers are being forced to cut their asking prices to shift their homes. In the year to June, the number of homes with price reductions doubled to 14.9 per cent, according to Realtor.com.

A shortage of homes for sale was a key driver of the boom in prices over the last decade. But that trend has reversed in 2022. As demand has fallen and sales have slowed, the number of homes on the market has risen sharply.

Housing inventory has soared to 10.9 months, its highest level since 2009. That means it would take 10.9 months for the new homes on the market to be sold, if no additional new houses came on the market.

“People who have deferred selling their home because it was just too lucrative to sit tight are now scrambling to get out,” Shepherdson said.