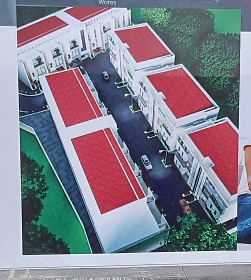 “A lot of experimental need to be done by architects and stakeholders. Absence of that is a major setback to housing development in Nigeria. In trying new technique, it might be expensive at the beginning but when you get it right, it becomes more economical to traditional approach to things. More experiments will lead to cheaper cost of buildings.”

“We could deploy a system of reducing how much concrete used but reinforce the building appropriately to reduce the cost of casting. Ensure value engineering in the configuration of the housing units to save spaces and number of windows to use,” he said.

Giving details of the project, a Director of Alphacrest, Mr Akin Opatola, who doubles as Vice President, FIABCI Nigeria, disclosed that the project would be delivered within the next 24 months.

In terms of standard construction and finishing, he said his firm purposely partnered Mainstone Construction Company due to the latter’s track record of adherence to quality.

“It was a good thing that my firm decided to partner Mainstone. We are real estate marketing and consulting outfit, so we don’t partner with just any developer. We met with them, had engagement and we noticed that we have similar type of ethics in terms of design, quality finishing,” he said.

He promised would-be subscribers that the new development, which its construction  is due for completion in 24 months,  won’t be another abandoned project, pointing out  enough  capital  and building materials have been secured to deliver it as promised.

Justifying the location, he said: ‘There are so many lands in Yaba available for development, but we look at the serenity of this place. It is quite unique, serene and also peaceful. It will be easy to sell especially to home owners and people that have family dwelling.

“Basically, what we are trying to achieve here is to cater for the diverseness of people in this area. We have been building for a while, but we constrained ourselves to three bedrooms. However, the demand changed because we have a lot of students in this area and also a lot of newly graduated people, so we have the diversity in Yaba. We have a wide array of people with different needs.’

According to him, the promoters of the project are particular about the integrity of the firm and will ultimately avoid any form of reputational damage.