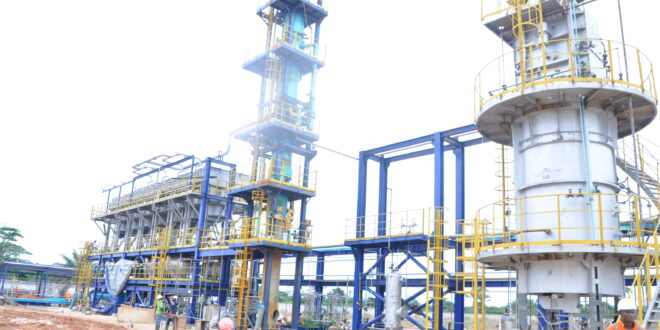 Edo State is the only state in Nigeria that can boast of the establishment of two cement companies and two modular refineries between 2013 and 2022. Dangote cement, Bua cement in Okpella, Edo Modular Refinery Ologbo and Duport Modullar Refinery, Egbokor in Edo State have become the new industrial hubs of Nigeria. Edo production centre can boast of many companies which have changed Edo State economy forever. The new Edo economy that can create an environment for existing firms to grow, become more productive and cheap. Edo State economy can facilitate access to a larger consumer base, a greater pool of qualified workers, additional sources of financing, and new technologies in cement and modular refinery.

Dangote Group is producing Cement in Okpella, Edo State. It is predicted that the new plant will add more millions metric tonnes per annum to the company’s current local cement output of 29.25 million tonnes. Dangote Cement says that work is underway to increase its total cement production capacity in Nigeria by 4.5Mt/yr before September 2022. The plans consist of new lines at the company’s cement plants in Obajana, Kogi state, and Okpella, Edo state, and the restart of production at its plant at Gboko, Benue state.

In 2009 BUA Group acquired the Cement Company of Northern Nigeria, CCNN (SokotoCement) and the Edo Cement Company to boost and increase the metric tonnes of annual cement production in the country. In 2018, BUA Obu Cement completed a 3million mtpa plant resulting in a combined capacity at Okpellaof 6million mtpa. At the second quarters of 2015, BUA signed a contract with FLSmidthfor a 3 million mtpa new production line in Edo Cement to be sited at Obu, Edo state. The $600 million Cement Plant in Okpella, Edo State was opened in 2015 with a capacity of 3 million mtpa resulting in a 3.5 million mtpa combined installed capacity at both Edo and Obu plants.

Asides from the initial costs, over $100 million was invested in gas turbines to power a 50-megawatt plant for 24-hour electricity generation as well as the construction of a 30km gas supply pipeline. The world-class plant would give a much needed boost to Nigeria’s cement industry as well as enhance the development of related sectors, including housing and construction.

Duport Midstream Company Limited of Lagos announced in late March that its upcoming modular refinery in Nigeria’s Edo State would indeed be ready for commissioning in the fourth quarter of this year. This project is being implemented by Duport alongside the Nigerian Content Development and Monitoring Board (NCDMB). NCDMB Executive Secretary Simbi Kesiyi Wabote recently toured the project site and reportedly confirmed that the project has reached approximately 80% completion. The Duport modular refinery is a small part of the country’s long-term objective for improving its industrialization. Mr. Wabote stated that “When the Federal Government enunciated the policy on the development of modular refineries, the NCDMB decided to explore ways through which we can build modular refineries to refine products locally.” Duport Midstream Company Limited is hoping to develop the first energy park in Nigeria, beginning with this refinery and over the next five years it hopes to add a gas processing plant, a CNG plant, a refined product terminal and a power plant in Nigeria’s Edo State.

Duport Midstream and other investors to develop critical energy facilities were conceived to support President Muhammadu Buhari’s drive to create millions of jobs for the Nigerian populace. He assured that NCDMB was committed to create jobs for Nigerians through its direct projects and partnerships with other project promoters.

According to Wabote, “when the Federal Government enunciated the policy on the development of modular refineries, NCDMB decided to explore ways through which we can build modular refineries to refine products locally. We first partnered with Waltesmith Modular Refinery in Imo State and it is already operational, refining 5000 barrels of crude per day. Azikel Modular Refinery in Bayelsa State is the second one and this Duport project is the third project and we believe that it would be commissioned in the last quarter of this year.”

Wabote commended the Edo State Governor for a providing conducive environment for the Duport Energy Park project and underscored the peaceful disposition of the host communities that attracted the investment. He said the project has created job opportunities at the construction phase and the employment numbers would multiply during the operations and maintenance phase. He restated that one of the key benefits for the establishment of modular refineries is the steady rebuilding of local skills in refinery operations especially amongst the young workforce. Governor Obaseki has commended the NCDMB for its developmental strides and expressed hope for more partnership as it continues to provide favourable working conditions in the state for all the projects of the Board

Edo modular refinery was developed by two Chinese firms: AIPCC Energy Limited and Peiyang Chemical Equipment Company Limited. It has a capacity of 6,000 barrels per day and it is expected to produce 50 percent of diesel (500,000 litres), 25 percent of naphtha (300,000 litres) and 20 percent of fuel oil (200,000 litres) from its feedstock.Tim Tian, managing director of Edo Modular Refinery, had said the refinery will get its feedstock (crude) from the Nigerian Petroleum Development Company (NPDC) facility – oil mining lease (OML) 111 – near Benin City. Governor Obaseki has said we were in China to sign this Memorandum of Understanding (MoU). I am very impressed that work has moved at such a speed in spite of the delay caused by COVID-19 pandemic,” Obaseki said during a recent visit to the facility. “The plant is ready to receive crude oil; it is ready to process and it is ready to deliver products. They have done the pre-commission with the Department of Petroleum Resources, they have certified the refinery. “What we have left now is to finalise the crude oil sale contract, these facilities have to get a certain type of crude from the escravos line and that is being finalised. “I hope that before the end of August, we should start lifting products from this refinery.”