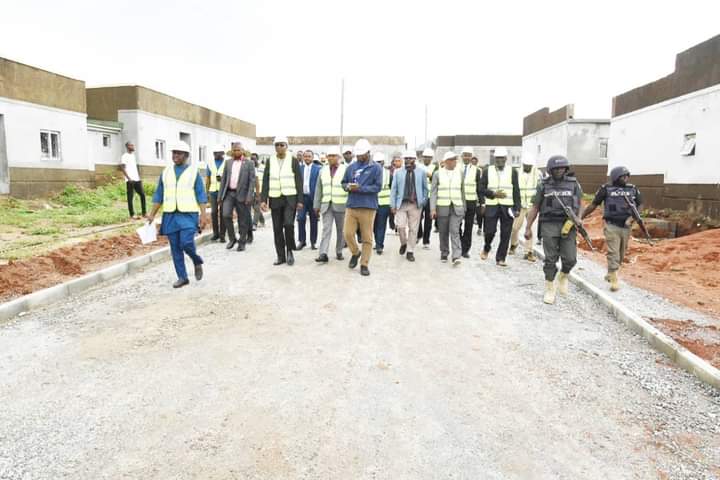 The Managing Director/Chief Executive of the Federal Mortgage Bank of Nigeria (FMBN), Mr. Madu Hamman, has urged Nigerians to take advantage of the Bank’s affordable loan offers on the 1,250 Housing-Unit FMBN Mega City in Abuja to own a home.

Mr. Madu said this when he led a team of FMBN Management staff on an inspection visit to the 140-hectare FMBN Mega City project site located behind Mopol Barracks, Deidei, off Kubwa Expressway, Abuja on Tuesday, 16 August 2022. The project comprises 650 three-bedroom units and 600 units of two-bedroom bungalows. Brains and Hammers are the developers, and the project is currently at a 90 percent completion level.

“The work done on the project is satisfactory, and the infrastructure development is ongoing: road network, water reticulation, drainages, the access road to the project site. We’ve already started onboarding off-takers who will eventually get mortgage loans to own these homes.” Madu Hamman, FMBN MD/CE

The FMBN MD stated that interested subscribers could use the FMBN National Housing Fund (NHF) Mortgage loan, which provides up to N15million at a 6 percent interest rate and is payable over 15 years. He added that they could also leverage the FMBN Rent to Own Product, which makes it possible for an NHF subscriber to move in and pay towards ownership in monthly, quarterly, or yearly installments to become homeowners in the FMBN Mega City.

In his remarks, the FMBN Executive Director, Loans and Mortgages, Mr. Lukman Mustapha, expressed delight at the rate of progress on the project. He said the FMBN team was happy with the success recorded on the Bank’s pioneer city development project.

“We are proud because this is FMBN’s pioneer Mega City housing project. The Mega City concept marks FMBN’s expansion from building estates to building cities. And we are happy that the developers are adhering to quality specifications and moving to deliver as planned.” Mr. Lukman Mustapha, ED, Loans & Mortgages.