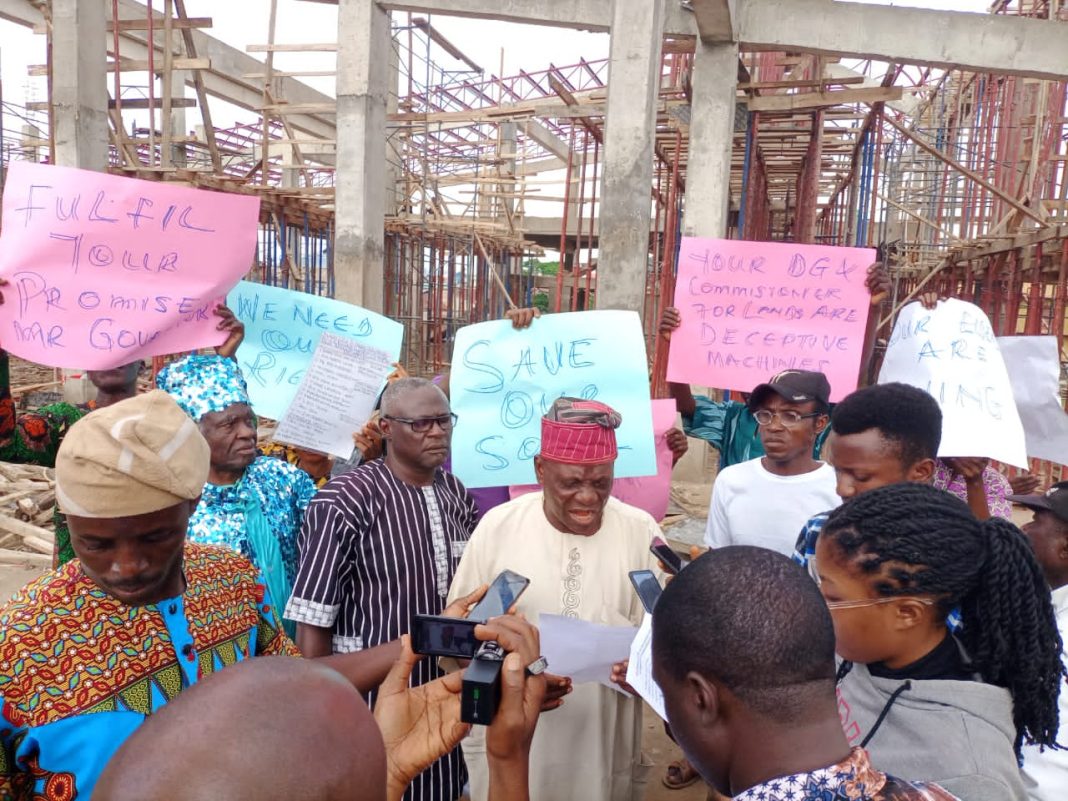 Some Ado Ekiti indigenes and property owners at the demolished Ijoka Quarters in Ekiti State on Wednesday staged a protest over properties worth N82.6 million that were pulled down by the state government for the construction of a bus terminal.

The protesters said it was sad and mind-boggling for the government to have demolished their agelong property spanning four years, without thinking of paying requisite compensations, describing this as “wicked and callous”.

The placard-carrying protesters visited the bus terminal construction site and the Palace of Ewi of Ado-Ekiti, Oba Adeyemo Adejugbe, to vent their grievances.

Addressing journalists during the protest, the spokesman of the aggrieved landlords, Mr Afolabi Ogunsakin, lamented perceived Governor Kayode Fayemi’s alleged nonchalant posture to pay their compensations, after being evicted at short notice.

He said: “Our dear ancestral home was demolished in 2016 by the state government without consideration for hardship and negative effects that we experienced.

“The community wants to state categorically here that henceforth, step will be taken to disturb workers on site. We are ready to damn the consequences until the government pay us our entitlements”.

Also fuming over the delay, the Head of the family, Chief Laisi Opokiti, regretted how they were being allegedly deceived by the government, saying: ” Many tombs where our forefathers were buried were levelled during the demolition. We know that their spirits will fight.

“Four years, four months and two days after demolition, the government didn’t pay us a dime. Governor Fayemi said he had approved money, but it was not given to us. We appeal that they give us our entitlements”.

Also speaking, the Community’s Youth Leader, Hon Olasehinde Omotoso, disclosed that they had visited the Commissioner for Housing and Urban Development, Mr. Diran Adesua and the Director-General, Bureau of Lands, Mrs Funke Falodun, despite all, their efforts were futile.

“We have visited them severally, but it seems they were deceiving us. We are not saying Governor Fayemi is bad, he is a good man, but we want him to order the payment of our compensation.

“If they refuse, the spirits of those that were buried here and those whose houses were demolished will fight back if they refuse to pay us”, he stated.

Oba Adejugbe, represented by the Omosio of Ado Ekiti, Chief Opeyemi Abiola, appealed to the protesters not to be unruly and destructive in their actions.

“We will relay your message to Kabiyesi. Baba will be around next week Tuesday, so that you can return here to ventilate your anger. He will take up your case with all relevant government agencies,” he said.