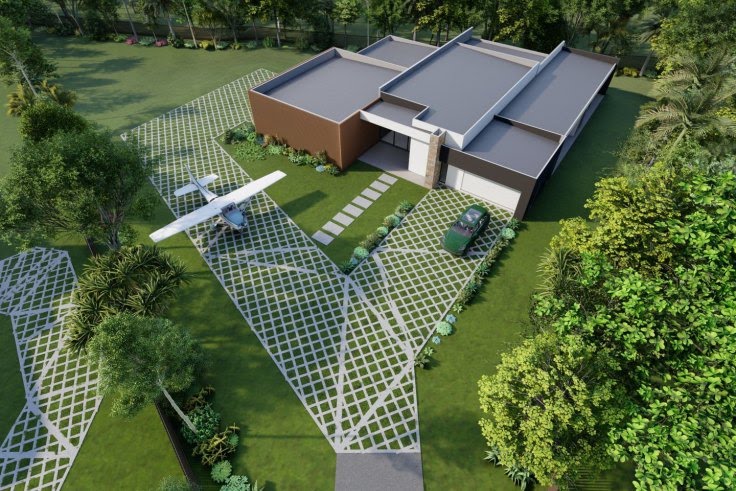 Most house hunters want to avoid living under the flight path, let alone by a runway.

But that’s precisely the drawcard at a new housing development on Queensland’s Fraser Coast, where residents will be able to land their light aircraft and then taxi it back to their front door.

Residents will swap the driveway for the runway, and the garage for their own personal hangar, at the Aquila Estate & Flying Club in Yengarie, a 15-minute drive from Maryborough and 35 minutes from Hervey Bay.

More than 60 residential lots will line an 800-metre grass airstrip at the fly-in fly-out gated community, and traffic lights will be used throughout the estate so planes and cars can share the roads.

Strong interest in residential lots at the estate, which hit the market earlier this month, has given it a flying start, said selling agent Russel Segal of RE/MAX Regency Gold Coast and Scenic Rim, who is also a part owner of the site.

Offers have landed on six of the 62 lots, which start from $275,000 and span a minimum of 2400 square metres, Mr Segal said, with interest coming from both capital city and regional buyers.

“A lot of inquiries are from Melbourne and Sydney – people are after a change of lifestyle, and they’re not getting value for money [where they are],” he said.

Popular in the United States, airparks have taken off in Australia in more recent years, allowing plane enthusiasts to build their dream home, and hangar, close to a runway. They enable residents to take off with ease, and also avoid rising hangar sale and leasing costs.

Such projects can be found across the county, from Rylstone in the NSW Central Tablelands to Denmark and Esperance on Western Australia’s south coast, as well as Queensland’s Airlie Beach, the Lockyer Valley Region and Gympie.

“In Australia there are quite a few of them, but nothing like what you get in America,” Mr Segal said, noting premier airparks there took such communities to new heights, with stylish homes, high-end facilities and amenities.

Unlike some airparks in Australia, which offer both residential and commercial sites, or give owners the option to build a hangar alone, the lots on the Aquila Estate will all be used for houses.

When not taking a joyride to Fraser Island, or flying over the Great Sandy Strait or Glass House Mountains, residents will be able to head to the pool or gym at a community hub, which will also have food and beverage facilities, or turn to the bike tracks and walks through 56 hectares of forest. There will also be a self-service workshop for when aircraft need maintenance.

Mr Segal hopes to see construction start on the first homes by early next year, and estimates the estate could be a $70-million plus project if each lot sells.

While some interested buyers were looking to build weekenders, others were after a tree change or an investment property, Mr Segal said. Most so far had been pilots, but there were interested plane enthusiasts without aircraft. He imagined over time there would be an almost even split between the two groups, noting the runway was not the only drawcard.

those ready to take to the skies, runway use will be limited to the day, and larger aircraft will need to land at nearby Maryborough Airport.

“You can’t fly in certain areas, can’t keep the engine of a plane running for more than 20 minutes… we’re very mindful people are moving out there because they want a bit of relaxation and want to get away from hustle and bustle,” Mr Segal said.

Purchasers will need to use the estate architect to design their off-grid homes within six months of settlement and will have three years to build. While they would need a hangar on their approved plans, building one remains optional.

Mr Segal said this was to ensure homes blended into the landscape and to protect the investment made by owners.

Plans for the airpark, to be built around an existing airstrip, were first submitted by a previous owner and approved by council back in 2015. An additional 700 metre cross-airstrip is now in the planning phase.