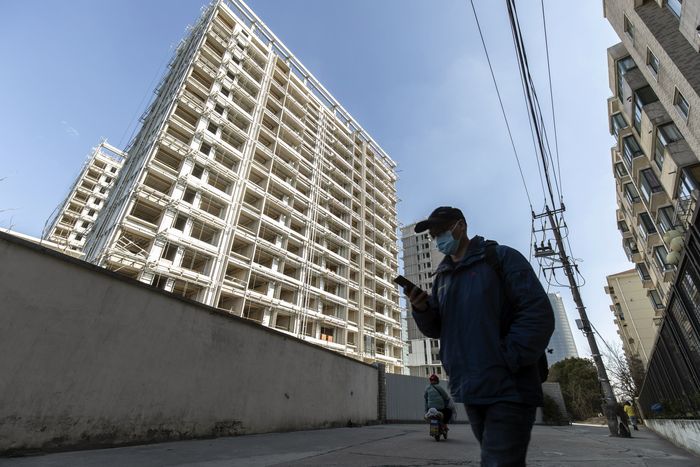 HONG KONG—According to government statistics, China’s housing market has cooled from its hot gains of years past but is still ticking along. The average new-home price rose 1.7% year over year in January and 1.2% in February.

Yet financial filings, marketing materials for apartments, property agents and analysts tell a different story: Debt-burdened developers are selling apartments at falling prices and in some cases providing big discounts to get cash in the door.

Since last summer, most residential real-estate developers in China have reported steep drops in contracted sales. Many have also disclosed substantial declines in average selling prices this year, according to a Wall Street Journal analysis of their monthly stock-exchange filings.

“The market has yet to show a clear recovery,” said Lin Bo, vice-research director at CRIC, a real-estate-industry data provider. “The supply, demand and prices are going down,” he added, referring to homes.

Property developers in China have been under pressure since the government imposed curbs on their extravagant borrowing in the summer of 2020. Investors have dumped their dollar bonds, pushing average yields above 30% recently and making it too costly for most developers to raise money in the debt markets. To avoid defaulting, many real-estate companies are rushing to sell apartments, which are now one of their biggest sources of cash.

Earlier this month, Soho China, a developer of mixed-use commercial and residential buildings, said it would sell nine projects in Beijing and Shanghai at a 30% discount and use all the proceeds to pay off its debts

In Zhengzhou, the capital of central China’s Henan province, property developers have been struggling to sell their inventory of homes while many buyers remain sidelined, according to property agents and online discussion forums. Over the past decade, industrialization and rapid urbanization transformed Zhengzhou into a mega city that real-estate developers flocked to.

Some developers have been offering big discounts to draw buyers. On social media, an apartment from China Vanke Co. —another stronger developer—that was listed at 21,500 yuan per square meter, roughly equivalent to $314 a square foot, last July, was recently marketed by agents at about a 19% discount. Some local home buyers, meanwhile, complained online last month about similar discounts being offered on a Country Garden project in Zhengzhou, saying that had a negative effect on the value of apartments they had recently purchased.

China Vanke didn’t respond to a request for comment. Country Garden said it “adjusted the prices of some buildings in some projects at times” in Zhengzhou, based on the market situation and selling prices of neighboring projects, and called it a normal promotional practice.

Economists and property analysts say one main reason the country’s official home-price data has shown muted changes is because of its composition. The national index surveys property prices in 70 out of China’s nearly 700 cities, and the largest and richest cities like Beijing, Shanghai and Shenzhen have registered stronger price gains.

The average selling prices that developers report, though, can vary a lot based on the companies’ geographical coverage, timing of project launches and any discounts they have provided to buyers, said Franco Leung, head of China property corporate ratings at Moody’s Investors Service.

The government’s home-price data also serves as a measure to influence the market, and officials have an interest in smoothing out the data and keeping it relatively stable, some analysts say. Big price drops in the official numbers could make people even less eager to buy homes, which would worsen conditions in the property market.

Li Yujia, chief researcher with the Guangdong Housing Policy Research Center, wrote in a newspaper column last month that the relatively stable home-price data in January aimed to “ease the pessimistic mood” of the sector and prevent a downward trend in new-home prices. He also noted that the government’s goal has been to maintain land- and home-price stability and that the gradually declining year-over-year growth in prices helps guide market expectations.

China started to compile its housing-price index about two decades ago. The National Statistics Bureau decided on the list of 70 cities in 2005, when many other Chinese cities were still villages. Some analysts think it doesn’t reflect the reality of today’s property market.

The index has a disproportionate focus on cities whose housing prices are stronger, analysts say. Those that have seen the biggest price drops are often not in the index.

“I believe most of those developers’ properties are in lower third- or fourth-tier cities,” said You Zipei, an analyst with Huaxi Securities. China’s tier classification system is based on a city’s population, political administration level and economic growth.

Third- and fourth-tier cities are economically and industrially weaker, and have limited demand for housing compared with first- and second-tier cities, according to Zhang Bo, director with 58 Anjuke Real Estate Research Institute.

Unsold homes are piling up in tier-three and tier-four cities. According to a recent report from Shanghai E-House Real Estate Research Institute, the number has been growing for nearly 40 months.

To bring in sales, some developers have been giving out free cars, parking spots, decorations or household items to home buyers when they can’t lower their apartment prices, according to Chinese state media.

Logan Group, which has a major presence in southern China, has been promoting some of its properties in the region. One in Liuzhou, a third-tier city in Guangxi province, has offered buyers incentives comprising discounts of more than 20% off the property’s price, five years’ worth of management fees and a raffle for home appliances.

In Xinyang, a third-tier city in Henan province, a developer recently advertised: “Buy a house and get a luxury car.” Buyers of selected apartments can get cars worth 100,000 yuan, the equivalent of about $16,000, while some purchasing villas could receive a Mercedes-Benz worth 300,000 yuan.

The government’s official price index shows the general trend of China’s property market with a few months of lag time, said Logan Wright, director of China research at Rhodium Group, a consulting firm, but it fails to reflect the magnitude of price moves.

“This can be for any number of reasons: the projects and housing units sampled by the city, government price controls, hidden price adjustments by developers using different incentives,” he said.

To make a transaction official, home buyers need to register their properties with the local housing bureau after signing a contract with a developer or seller. Local statistics bureaus sample registered prices, according to analysts and property agents.

Yang Hongxu, deputy director of real-estate services provider E-House China, said that price controls have been a major reason that the official home-price data has remained stable while market-price changes have been bigger—in both directions.

Mega cities like Beijing, Shanghai and Shenzhen, where property values have risen the most, have imposed price limits and taxes to curb the prices. There are also cities that in recent months have imposed minimum prices to stop home prices from falling further.

Some analysts suspect local housing bureaus delay the registration of certain properties whose prices are very high or very low to keep the official data relatively stable from month to month. “They control prices this way,” said Mr. You, with Huaxi Securities in Shanghai