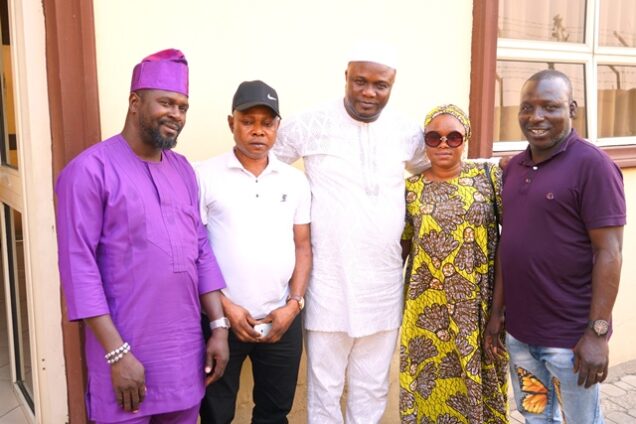 In a bid to end the nine-year-old dispute over the Ikeja kingdom’s vacant throne, the royal families have picked a real estate expert, Tajudeen Muritala, as the new monarch for the community and the traditional ruler that would put the empty palace into proper use.

The families said that they decided to pick Tajudeen as their preferred candidate to ascend the kingdom’s traditional throne due to his lineage as a royal son from the Osooja royal family and to end the interregnum that had affected the community from having a leader.

Aside from unveiling the real estate expert, the family hinted that they have also written to the Lagos State Governor, Babajide Sanwo-Olu, to inform him of their conclusions and for an official declaration of their preferred candidate for the throne.

Members of the royal families unveiled Tajudeen on Thursday after signing documents to indicate that Tajudeen was their preferred candidate and that he should be installed as the new monarch for the kingdom.

The decision was reached during a meeting that was also attended by elders of the community, principal members, youths, and community members that also threw their weight behind the decision reached by the family.

It was learnt that plans have also been concluded to commence the traditional rites for the real estate expert before assuming the Ikeja kingdom throne.

The new monarch was unveiled during a press briefing in Ikeja and was attended by members of the three royal families, Iyade, Amore, and Oshoja as well as representatives from the families including the head of the family, Chief Olushola Coker, Chief Mureni Illo, Prince Saheed Afariogun, Prince Jamiu Folami, Prince Jamiu Obidairo and the Iyaloja of Ikeja, Princess Mutiat Folami.

Speaking to newsmen during a press briefing in Ikeja, Coker stressed that Tajudeen’s selection was a unanimous decision of the royal families in Ikeja kingdom and that the name was picked while scrutinizing all candidates shortlisted to assume the throne with the criteria of Obaship within the royal families.

He noted that the same agreement was reached earlier and formed the content of their letter earlier sent in 2016 to the former governor, Akinwunmi Ambode, for approval which was not done before leaving office.

According to him, about 40 heads of different sub-families from the royal families signed the agreement documents and asked the government to approve Tajudeen as their preferred candidate from the Osooja royal family.

The head of the family and other members appealed to the government to consent to their chosen candidate and to quickly give him the staff of office.

Addressing newsmen after his unveiling, Tajudeen, the Olu of Ikeja-designate, described his selection as a welcome development and what had been destined by God for him, saying I accept it and I am ready to serve the people of Ikeja effectively.

He added that his selection was a call to serve the people and to ensure that the palace worked for the progress of every individual irrespective of their status.

The newly elected candidate for the throne, meanwhile, said that his doors were open for collaboration on the development of the community, adding that when installed, he would not administer the kingdom in isolation.