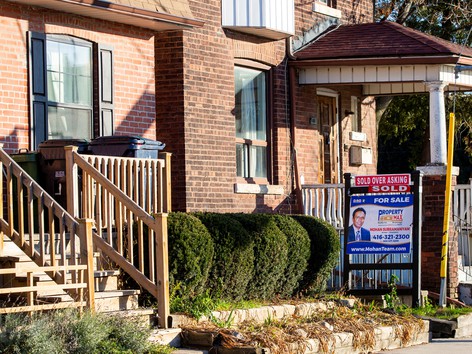 Generation Squeeze argues that the surtax could raise between $4.54 billion and $5.83 billion to go toward other housing projects

A think-tank funded in part by the Canada Mortgage Housing Corporation (CMHC) and National Housing Strategy is proposing that homes valued at more than $1 million be subjected to an annual deferrable surtax as part of a plan to tackle housing inequality.

In a report released on Wednesday, the research organization Generation Squeeze argues that such a surtax would hit nine per cent of homes across the country and could raise between $4.54 billion and $5.83 billion to go toward other housing projects.

Most Canadians, according to the report, would not have to pay anything.

“The tax will apply only to the nine per cent of households living in the most valuable principal residences in the country — including 13 per cent of Ontario households, and 21 per cent of B.C. households,” it reads.

Deferrable in this case would mean that the tax would not need to be paid until the home is sold or inherited. The report added that this design detail would be flexible to avoid imposing risks on those with limited incomes or wealth beyond their homes.

The proposal, which was part of a package of measures including increasing affordable purpose-built supply and policies to keep rental units affordable, comes as low interest rates and a boom in demand for single-family housing in the suburbs helped push the average home price in Canada to an all-time high of $720,850 in November .

Thomas Davidoff, an associate professor at the University of British Columbia who researches housing and real estate, told the Financial Post that setting the politics of it aside, a surtax would ultimately soften inequality between homeowners and renters.

It’s a pretty obvious fix: if you think there’s housing inequality, taking money from homeowners and big money voters and giving it to renters is a pretty straightforward way to address that.”

Davidoff added that it would take a combination of solutions to address high house prices in the country, but tax policy is step one.

Mortgage expert Rob McLister, however, told the Financial Post that he believes wealth redistribution is not the way to create lasting prosperity.

“The absolute last thing overtaxed Canadians need is another tax,” McLister wrote in an email. “If the goal is to make home ownership more accessible, the solution is the same as it always was: incentivize more home building within a reasonable commute from where people want to live. That takes mass housing coordination by all three levels of government and investment in ultra-high-speed transit.”

In a statement to the Financial Post, The Canadian Taxpayers Federation also criticized the report, arguing that higher taxes could have the opposite effect in addressing home prices.

Former CMHC chief executive Evan Siddall addressed housing wealth inequality in a 2018 speech when he was leading the organization, noting that the continued escalation of house prices in Canada will create “an even greater gap between the rich and the poor in this country.”

More recently, Siddall called a capital gains tax on homes a “step too far” for politicians during a December interview on CTV’s Question Period.

“There are lots of options. But politicians just aren’t allowed to have this conversation because the opposition — and it’s any colour — will skewer them for it. And so, we don’t have the debate that we need to have,” he said.

The concept has been long considered a political third rail. During last year’s federal election, both the Liberals and Conservatives were quick to shoot down the possibility of introducing measures to impose capital gains taxes on homeowners.