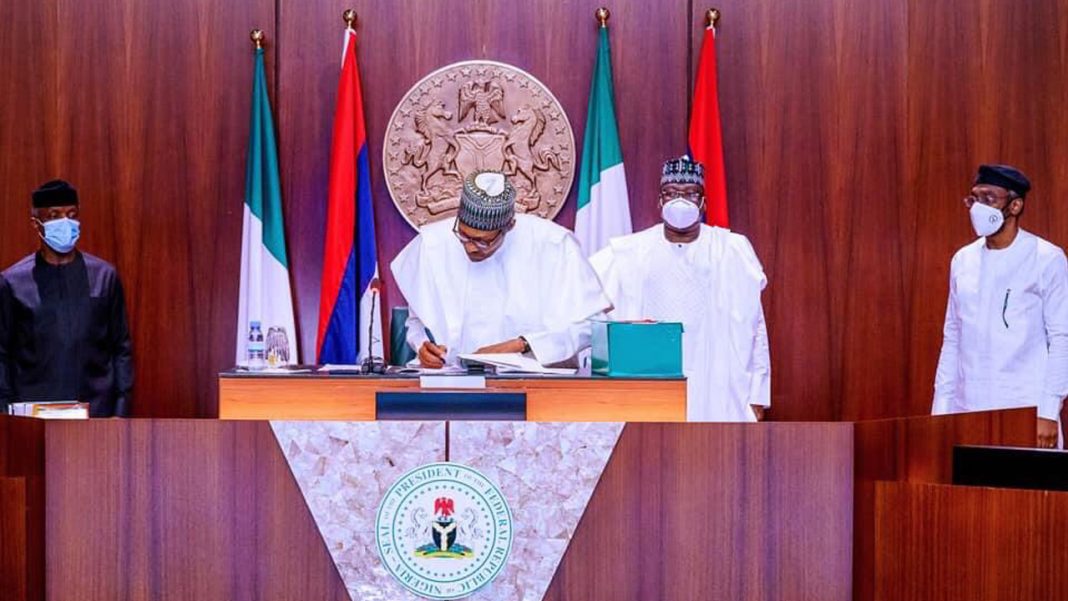 The budget, valued at N17.126 trillion, was recently transmitted to the President by the National Assembly, on Friday, December 24.

Buhari also signed the Finance Bill 2021, which he said was for the execution of the 2022 Budget.

The President had submitted the draft proposed 2022 Budget of N16.391trillion to the joint session of the National Assembly on Thursday, October 7, 2021, calling on the legislators to give it a speedy consideration.

The breakdown of the budget include N869 billion for statutory allocation, N3.8 trillion for debt servicing, N6.9 trillion and N5.4 trillion for recurrent and capital expenditure respectively.

The oil benchmark was raised from the proposed $57 per barrel to $62 with the projected oil production put at 1.88million barrels per day.

The 2022 Appropriation Bill was handed over to the President for signing by his Senior Special Assistant on National Assembly Matters (Senate), Senator Babajide Omoworare, while he was aided in the signing process by the President of the Senate, Ahmad Lawan; Speaker of the House of Representatives, Femi Gbajabiamila; the Secretary to the Government of the Federation (SGF), Boss Mustapha; and the Minister of Finance Budget and National Planning, Zainab Ahmed.

The Minister of Finance, Budget and National Planning, Mrs Zainab Ahmed, had in October laid out the projected funding process for the Budget, saying revenues of N6.54 trillion and N2.62 trillion are projected to accrue to the Federation Account and the Value Added Tax (VAT) respectively.

Ahmed said the deficit would be funded through borrowings.